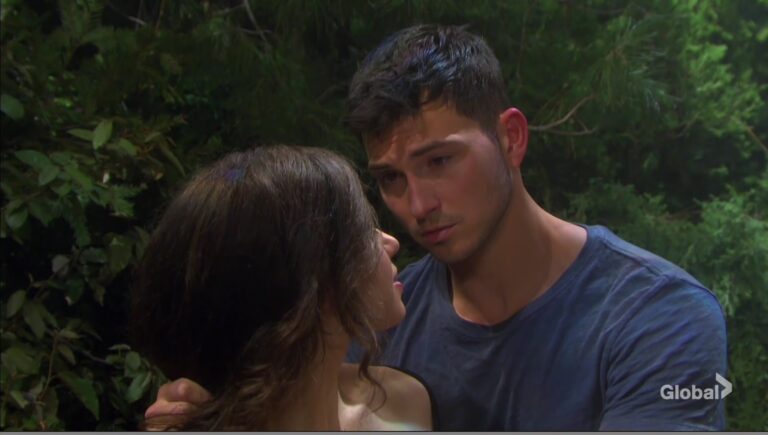 In the Monday, September 6, 2021, full episode recap of Days of our Lives, Calista hits on Steve, Ben and Ciara don’t see eye to eye, and EJ makes demands. If you missed out, Soaps Spoilers has you covered with Friday’s Days recap: Ciara had baby fever.

In the forest, Ciara tells Ben she wants to try for a baby. He asks if she’s serious. She asks why he looks uncomfortable. He’s just surprised. Caught off-guard. They’re newlyweds. They discuss how they lost a year, thanks to Eve and Rhodes. Ben asks what the rush is. She’s not rushing. She can’t help but imagine their future together and the dreams they shared. She can’t wait to make those dreams come true. Ben argues that it’s a huge responsibility and costly. Ciara could work at Titan again. Her grandfather will be fine with that, especially when he finds out she’d be carrying his great-grandchild. He wonders who would take care of the kid. She talks about working remotely, changing her hours and hiring a nanny. Ben argues all of her points. She retorts that people do it all the time. She asks if he doesn’t want kids with her. He tells her, “Of course I do.” Every minute with her is a gift. He’s worried about skipping steps. This is the happiest he’s been in his life and doesn’t want to give it up. He kisses her neck. She tells him the honeymoon can’t last forever, but he wants her all to himself. He asks to postpone talk of babies. He wants a baby but just not now. She gets it. They hit the road, headed for New Orleans.

When Steve arrives at the Kiriakis mansion, Calista introduced herself and tells him, “The pleasure’s all mine, handsome.” He asks if she and Bonnie are close. She deflects. She’s there for the wedding and learns Justin was married to his deceased sister. Calista lost her husband, too. He’s sorry. She tells him he was murdered and the killer went free. Calista thinks he asks a lot of questions. She asks about his eye under the patch. He lost it in a knife fight, he tells her. She’s intrigued and finds it sexy. She hits on him, invites him to bed with her. He explains he’s married to the matron of honor — happily. She gets on top of him and he groans. She won’t tell if he doesn’t.

Justin learns from Kayla that Bonnie’s running late. She’s not there yet. Justin worries. She should have been there by now. Kayla thinks he’s acting like a nervous groom. Kayla doesn’t think he needs to worry about Bonnie, even though she’s unpredictable. Kayla tries to track her down.

Bonnie hides under Xander’s bed with his million dollars as Xander runs out of the washroom with half his face covered in shaving cream. He answers the door to EJ, who had been pounding at the door. EJ has his employment contract. Xander reads through it and EJ hands him a pen to sign. Bonnie’s phone buzzes and EJ looks around. The men check their phones and assume the sound came from next door, while Bonnie pounds the floor, silently looking worried. A few moments later, after Kayla leaves her a message, she texts one. She hears back that Bonnie says she’s at the nail salon. EJ gets a call and needs to take it outside. He’ll be back for his pound of flesh if there’s money missing. “Duly noted,” Xander says. EJ takes his briefcase and goes, and Xander realizes he still has shaving cream on his face. “Bloody hell, why didn’t he say something?” He rushes back to the shower and Bonnie lets herself out. Later, Xander dresses and Gwen appears. She updates him on telling her dad Snyder blackmailed her, and that Xander was merely covering for him. She didn’t get a chance to tell him about the miscarriage.

As Gwen’s about to reveal all to Jack about why Dr. Snyder was blackmailing her, Julie calls. She’s locked in the freezer at Julie’s Place, so he dashes off. Gwen makes fun of Julie being locked up and Xander seems worried. He asks if Gwen’s going to totally come clean. She doesn’t see a way out of it. He knows Jack won’t react well. Just then, EJ comes pounding on the door like he’s the cops. Xander lets him in. EJ opens the briefcase and shows that it’s empty. He hollers, wondering who Gwen is. When she moves to tell him, he brushes her off. He couldn’t care less. Xander says the briefcase wasn’t left alone. EJ rips up the contract for Basic Black and takes off, threatening that he’ll be back in prison soon. He goes and Gwen asks if Xander scammed him. He denies that and realizes Bonnie was the culprit.

Jack gets Julie out of the freezer at the restaurant. He makes her hot tea and she thanks him for rescuing her. She’s in a blanket, hunched over. Moments later and you’d have found a Julie-sickle.” She reveals Doug locked her in. “My own husband locked me in the freezer.” They’re both baffled as to why he’d do this. He knew she was in there, with the doorstop under the door. Jack thinks the stopper slipped out but she banged on the door and Doug looked through the window and walked away. She thought he was going for help but he never returned. She thinks something is wrong. She calls around for him and worries something awful has happened to him.

Back at Kayla’s, Kay tells Justin that Bonnie doesn’t have cold feet. She was only concerned about Calista. They discuss her being in town, but Kayla doesn’t think there’s any cause to be worried. Kayla admits Bonnie’s turned her life around and it was motivated by Justin’s love. She truly thinks Bon Bon is a good person.

Bonnie walks in on Calista on top of Steve. She wonders what’s going on and Steve tells her that Justin took her make-up bag to his place. Bonnie thinks her sister-in-law should help her get ready. She asks Steve to get Justin to bring the bag back as she rushes Calista out of the room. Upstairs, Bonnie tells Calista she’s not a crook anymore, but she spent the last while hiding under a bed to get her money for her. She prays Justin never finds out. Calista says she’ll take it and be on her way. Bonnie demands the other blonde gives her the gun, first. Calista takes the gun out and tells Bonnie she’s not getting the gun. “You’re getting the bullet!” Downstairs, Steve calls Kayla to let her know about Bonnie staying there and admits Calista gave him a bad vibe.