Home » Days of our Lives » Days Recaps » Ciara Wants a Baby With Ben, While Gwen Reveals Snyder’s Blackmail to Jack

Ciara Wants a Baby With Ben, While Gwen Reveals Snyder’s Blackmail to Jack 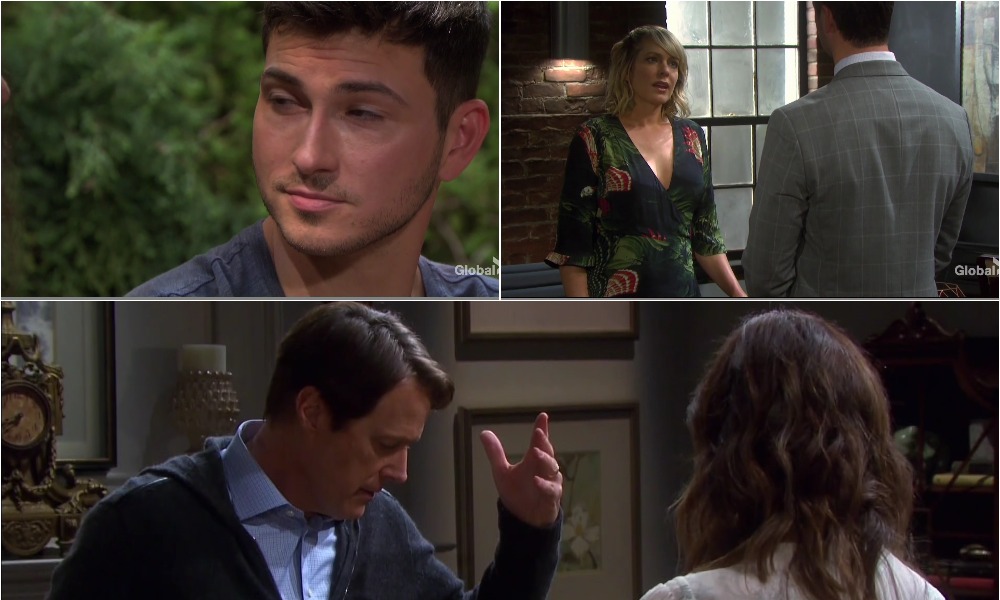 In the Friday, September 3, 2021, full episode recap of Days of our Lives, Gwen tells Jack some truths, Bonnie invites Xander to her wedding, and Ben and Ciara have sex in a tent. If you missed out, Soaps Spoilers has you covered with this Days recap from Thursday: Salemites left town for Labor Day weekend.

Ben and Ciara lie in each other’s arms in their tent in the woods on their honeymoon. They make out and Ben asks her if he can show her something. “Of course,” she says. He pulls out a book, the one Shawn gave them, that has Shakespeare’s Sonnet 29: When, in disgrace with fortune and men’s eyes. It’s how he feels about her. He kisses her. After sex, they talk about the last time she was in New Orleans. Later, they eat and pack. She’s out of birth control pills. He’s sure they can get her a prescription. “Or…not,” she says. He clears his throat in surprise. He’s not sure what that means. “What if I didn’t refill my prescription?” Ben’s still got no idea. “Are you saying you want to use a different kind of birth control? She says no, “What if we have a baby?”

At Alice’s, Gwen reads the news about Xander’s release and how it should never have happened. She feels for him for being publicly crucified for something he didn’t do. She knows they promised not to see each other but…she digs out her phone and tells Jack she read the hatchet job he did on Xander. “How could you?” Jack claims it’s his job to expose corruption. She defends Xander and Jack goes off on her for that. He doesn’t get this and wants the truth about her and Xandy. He explodes and this goes on for a while until Gwen finally admits that Xander isn’t guilty. She is. She reveals that Dr. Snyder wanted her to be his drug mule and Xander stood up for her. He was trying to get her out of this mess she got herself into. “And then, Snyder just dropped dead, right in front of us.” She’s not an innocent victim. Jack doesn’t get why she’d agree to Snyder’s demands anyway. She finally admits that she was being blackmailed by Snyder, but doesn’t say why.

Xander wakes up alone and smiling at his memory of making out with Gwen. He jumps out of bed when a knock comes on his door. “She’s back!” He opens the door. EJ shows him the news about Jack screwing over the both of them. He’s there to collect his million dollars. Xander reminds EJ he’s not getting it until after he gets his job back at Basic Black.

Steve finds Kayla on the sofa with a headache. “That must have been some bachelorette party.” Kayla shouldn’t have let Bonnie talk her into shots. Kay thought Bonnie would be excited but something’s bothering her. She brings up Calista. Steve jokes, “Who is she married to, Harrison Ford?” Kayla says, “No. Harrison Lord.” They think this is funny and Steve says he’s never heard of her.

Bonnie wakes up in Justin’s arms at the Kiriakis mansion. He tells her she didn’t have to worry about seeing her on their wedding day. It’s not bad luck. Calista lets herself in. She has something for Bonnie. Justin sits up, shocked. Calista says there will be no wedding unless you want to marry a murderer. She pulls out her gun and says Blondie used it to kill her hubby. Bonnie looks guilty when Justin asks if it’s true. He refuses to marry her. Bonnie tries to explain and Justin says the wedding is off. Bonnie wakes up with a yelp. Calista gives her a hanky from her husband Harrison. Bonnie rejects it and covers up. Justin goes to dress for breakfast and Calista leans in and demands her cash. Later, Justin’s all dapper looking and Calista notices, down in the living room. She munches on breakfast and drinks a Mimosa. He admits he’s never heard of her and is surprised she’s there. He asks where Bonnie is. She had an important errand to run. She pours herself another drink and he thinks she should slow down. She is trying to make herself happy. He reveals he lost his wife. She’s sorry. He asks after her husband. She drinks some more and Justin sees Kayla’s makeup bag. He thinks she should bring it to his gal and meet Kayla. Calista’s had too much to drink, so he does it himself.

EJ goes to Nicole at Basic Black. He wants her to give Xander his job back. Nicole laughs. “Like that’ll happen,” she says with a snort. EJ reminds her he’s the CO-CEO. He hands her a contract and orders her to sigh. She refuses. Her contract states that the executives in charge, Brady and her have full autonomy over new hires. EJ shares the details of why he’s giving Xander the job. Nicole asks how he’d feel if she told him to hire Lucas. “It’s not the same thing.” They go back and forth until he tells her she signs the contract — or she’s fired.

Bonnie goes to Xander’s room and invites him to her wedding. He’s confused and finds it “even weird for you, Bonnie.” What is he missing? She convinces him he’s missing nothing and he goes to shower. She leaves and lets herself in and starts schlepping the cash into her bag. She hears EJ yelling, “Xander, open up.” Xander hears him and yells to hold his horses. “I’m coming.” Bonnie, meanwhile struggles with what to do.