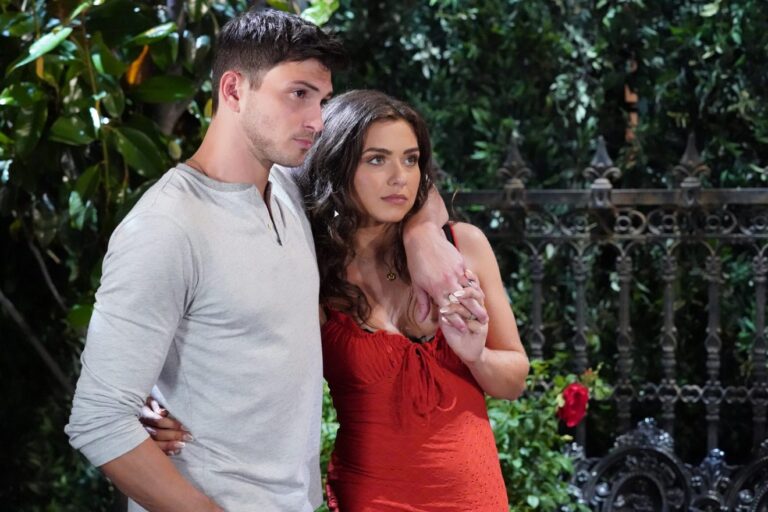 Saying goodbye to Ciara and Ben

They may not be the only couple in Salem who can claim to have gone to Hell and back, but it feels like they’ve done it more than once.

Now it looks like Ciara and Ben are headed for a better place.

Victoria Konefal (Ciara) and Robert Scott Wilson (Ben) will be departing from the cast of Days. Together, they formed the controversial couple known to their fans as CIN. The pair also appear on the spin-off, Beyond Salem.

Wilson joined the cast back on May 22, 2014, taking over the role from Justin Gaston. Part of the Weston crime family, Ben became smitten with Abigail Deveraux (Kate Mansi, Marci Miller) and wound up in a bitter rivalry with Chad DiMera (Billy Flynn).

Things went further south for him when it was revealed that he was the Necktie Killer who had been knocking numerous Salemites off for months. Unspooling from reality, he abducted Abigail, stole her baby, killed her midwife and left her to burn alive.

Eventually he was caught and imprisoned. Abigail later lost her mind and tried to burn him alive to get even. Not long after, he got amnesia.

Konefal took over the role of Bo (Peter Reckell) and Hope’s (Kristian Alfonso) daughter in 2017 and the character has hardly been the same since.

Ciara returned to Salem from Hong Kong in 2017, riding a motorcycle just like her father. She immediately started getting her nose in her mother’s difficult love life and found herself pulled toward Tripp (Lucas Adams).

She also developed a bitter antagonism to Claire (Olivia Rose Keegan). Because she had been raped by her step-brother, Ciara could not bring herself to sleep with Tripp and he wound up in bed with her enemy in an emotionally fraught situation. This ended their relationship.

Ben discovered Ciara after she was in a motorcycle crash in the woods. He nursed her back to health but their bonding was nearly ruined when he went off his meds.

After she repaid the favor and tried to help him cope with his illness, he was arrested for supposedly trying to burn her alive.

Ciara fought to clear his name and, despite her relationship with Tripp, the two of them wound up together, much to her mother’s horror.

Although he tried to keep his distance from Ciara to protect her from his potentially dangerous behavior, it was impossible for them to stay apart.

Eventually, they realized that Claire had been behind the fires that had been set and had been working with Eve (Kassie dePaiva) to destroy him.

Ben continued trying to do good deeds and redeem himself, but many Salemites were unwilling to give him a second shot. Victor (Thaao Penghlis) even had him abducted and wanted to kill him to separate him from Ciara.

The Kiriakis was not the only one violently opposed to the union. His unbalanced sister Jordan (Chrishelle Stause) retuned and attempted to kill Ciara. Ben was forced to save Ciara from his sister.

Finally, he and Ciara walked down the aisle only for a bomb to go off. Not longer after, she ended up with some amnesia of her own, forsaking Ben and going back to her ex, Theo Carver (Kyler Pettis).

Eventually, she and Ben overcame this, she remembered their bond, and they reunited. The pair married and she became pregnant. The devil had already returned to Salem and attempted to possess their first child, Bo, named after Ciara’s father, Bo Brady (Peter Reckell). The baby’s life was spared after a short kidnapping and the pair are finally happy, enjoying some peace.

Ben and Ciara will leave town together, sailing away Friday July 8 and living happily ever after. There are rumors that Robert Scott Wilson will return after a time to portray Alexander Kiriakis.