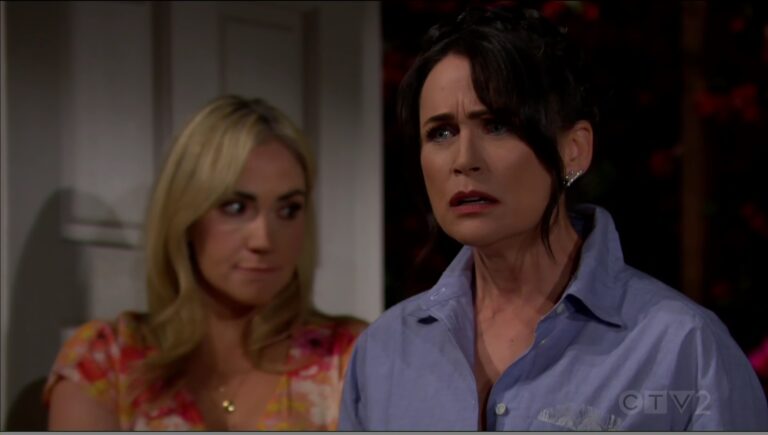 In the Monday, June 27, 2022, full episode recap of CBS’ Bold and the Beautiful, Ridge tells Katie his doubts about Carter’s wedding, Paris asks Zende to the ceremony, and Charlie plans the service with Carter.

We also have Friday’s B&B recap where Carter confessed to Ridge that he loves Quinn, and Grace begged Zende to stop the wedding.

Ridge is pleasantly surprised when he bumps into Katie at Brooke’s. She assumes he’s on the way to the wedding. She had no idea Carter and Paris were even dating let alone getting married.

Katie points out that Hope has some reservations about it. Ridge admits the whole wedding is weird. They recall Quinn and Carter’s affair. Donna shows up, admires how they look, and wonders where Brooke is.

Katie wonders if she’s going to the wedding. Donna has an “engagement.” Her sister wonders who that involves. Donna admits that she is seeing someone and is actually running a little late.

After she takes off, Katie asks Ridge what’s weighing him down. Sitting down, he admits he has reservations about the wedding and clears his throat. He doesn’t think Carter is running to Paris but away from his feelings for Quinn.

He doesn’t think Paris deserves this. He’s tried talking to Carter but can’t get through to him.

At home, Eric tells Quinn that he’s off to the club. She thought they were going to have lunch. He wonders why she’s not going to the wedding. Quinn doesn’t think Carter would want her there but she hopes he finds what he’s looking for.

She tells Eric she misses them spending more time together. His loyalty and commitment mean everything to her and she’s glad she’s the only woman in his life.

Donna and Eric meet in their room upstairs. She was worried that the guilt was starting to get to him. He can’t stay away from her when she brings him so much light and happiness.

That means a lot to her. She loves him so much but feels guilty about being with a married man. He agrees. Quinn deserves the truth and he’s going to tell her. “I love you too much. I’m not going to let you go,” he says. They kiss and fall into bed.

Quinn goes to the club for lunch with Bridget. They discuss Eric and worry that he is neglecting himself while looking after his health. Quinn doesn’t understand anything about pickle-ball but he always comes home energized.

Bridget brings up Carter and Paris getting married. Quinn says what he does with his life is none of her business. They see from the alarm that Eric’s heart rate is spiking again.

Quinn asks the waiter what court Eric is playing on. He says the courts are closed for resurfacing. The waiter explains that Eric has been staying in bungalow 24. Quinn jogs off.

When she gets to bungalow 24 with Bridget, she bursts through the door and Donna hides under the sheets. Quinn asks what’s going on and Donna sheepishly sticks her head out.

Bridget looks away. “No!” Quinn gasps.

At Forrester Creations, Carter is making calls to arrange the wedding. Paris rushes in. Even if seeing him is supposed to be bad luck, she can’t stay away. He’s the dream she never realizes she wanted.

She hasn’t spoken to Zende yet, or her mom. She won’t let that get in the way of the best day of their lives.

After she putters off, Charlie shows up and tells Carter how happy he is to officiate for his wedding. He wants the day to be really special for him. Pam wanted to be there but she had to go to a knitting retreat.

Paris drops by Zende’s office. Things are awkward. He tells her that her mom already told him about the engagement. “I’m happy for you. Congratulations,” he says. He’s startled when she announces the wedding is happening today.

It would mean the world to her for him to be at the service. If that’s too difficult, she will understand. Zende tells her that his happiness means everything to him and he’ll be there. They hug.

Back in his office, Carter thinks about telling Quinn he will always love her. Paris comes in and tells him Zende will come to the wedding.

Carter is looking forward to them starting their life together. He’s been looking for this in all the wrong places.