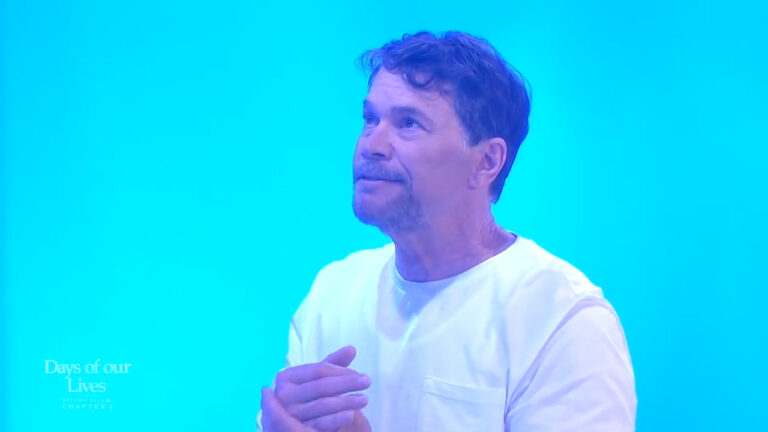 Two fan favorites back for a special!

Days of our Lives viewers never thought we’d see the day that Kristian Alfonso (Hope Brady) and Peter Reckell (Bo Brady) would return to Days, even in a small capacity such as Beyond Salem. Both actors stated they wouldn’t return. It looks as though that ship hasn’t sailed and that July will bring another five-episode run from July 11-15 on Peacock.

In addition, Abigail Klein will be seen as a recast of Stephanie Johnson, a role originated by Shelley Hennig. Eileen Davidson returns in the role as Kristen DiMera and her real-life husband, Vince Van Patten (ex-Christian Y&R) will portray Phil Hellworth.

Meanwhile, Loretta Devine is Angela, and Christopher Sean is back as Paul Narita. Three newcomers are added to the roster in  Colton Little as Shane and Kimberly’s son Andrew Donovan, Tanner Stine as Stephanie’s brother Joey Johnson, and Victoria Grace is Wendy Shin.

The last name on the roster came out April 29. Steve Burton (Jason Morgan) will be joining Beyond Salem. This comes as a surprise to many, since Burton left General Hospital in 2021 after refusing to adhere to the vaccine mandate.

There has been no information regarding whether or not the actor has been vaccinated or if it is mandated at Days of Our Lives yet.

In an epic, action-packed tale that spans the entire globe, from Monte Carlo to Hong Kong, heartwarming family reunions take a dangerous turn as a mysterious adversary wreaks havoc on their lives.

The next chapter of Days of our Lives: Beyond Salem is story full of larger-than-life romance, jaw-dropping twists, and high-stakes drama — and it all connects back to a plot that longtime DOOL fans will surely remember.

“We are beyond thrilled to be partnering with Peacock again to produce a second chapter of  Days of our Lives: Beyond Salem,” said Executive Producer Ken Corday in a statement.

“Being able to build off of the storylines from Days of our Lives to create another exciting series for the audience brings myself, the Corday Productions team, and the cast so much joy. I cannot wait for the fans to see what we have in store next!”

Hey #Days fans! Go #BEYONDSALEM with us again this Summer! You won’t want to miss a minute of the adventure starting July 11 ONLY on @PeacockTV. pic.twitter.com/r9Wtwl6W8N

Ben, Ciara and Baby Bo visit Hope as Bo watches from the heavens.
John attends a Pride celebration with Paul.

Steve and Kayla spend quality time with Stephanie, Joey and Tripp.
As these families reunite, mysterious foes come between them.

Devious plans are made to unite the magical prisms.
Harris charms Hope as Bo fumes.

John and Steve are held captive as Paul and Andrew Donovan team up to find them.
Joey and Tripp search for clues to find Steve and recruit an unexpected ally.

Wendy, Joey, Tripp, Paul and Andrew prepare to attend a gala DiMera is hosting to reveal a prism; Li and Gabi partake in romance; .

Hope reveals the truth about marrying Harris to Ben and Ciara while Bo attempts to intervene.

The DiMera gala is underway as guests from Salem come together; against their will.
John and Steve plan to secure the prism but are interrupted by Marlena and Kayla.

Ben and Ciara take on Harris and Megan.
Bo and Hope are reunited.

All hell breaks loose at the gala as brainwashed John and Steve make a play for the prism while family and friends try to break the spell.

At the botched wedding, Hope and Megan face off while Harris struggles within.

Bo gets good news from Angela.