Home » Bold and Beautiful » B&B Recaps » After Justin Confesses He Caught Quinn With Carter, Brooke Confronts Quinn, Who Reveals All

After Justin Confesses He Caught Quinn With Carter, Brooke Confronts Quinn, Who Reveals All 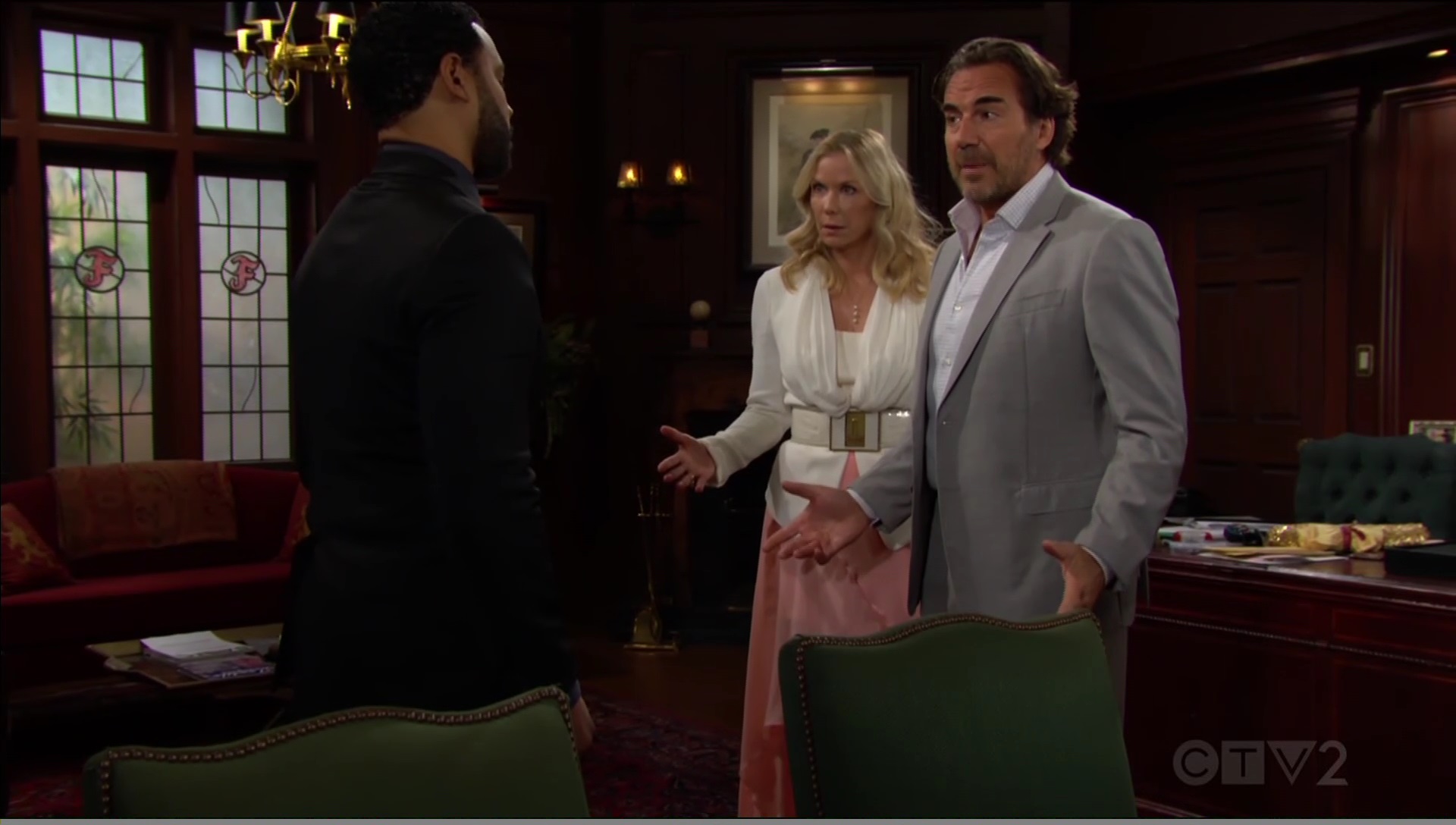 In the Wednesday, September 29, 2021, full episode recap of Bold and the Beautiful, Brooke and Ridge tag team Justin for the truth, and Eric turns the tables on Katie and asks about her relationship with Bill. If you missed out, Soaps Spoilers has Tuesday’s B&B recap when Steffy gave Sheila a shove to get her to leave.

Related: Nick Waters back at B&B as Keith

Quinn and Carter gripe about the fact that they told Justin everything. They worry about him telling Ridge their little secret. Carter thinks they made him believe in the reason behind keeping their secret. They ponder this at great lengths. Quinn frets and wonders if she should call Eric or go home. Quinn worries at great lengths about her husband’s secret coming out.

In Ridge’s office, when Justin beats around the bush instead of just telling Ridge what he found Quinn and Carter up to, Ridge demands Justin know where he followed Quinn. Is she betraying his father or not? Justin won’t say and so Ridge starts hollering and then Brooke wanders in and gets on his case. Justin flashes to Quinn and Carter begging him to keep silent about their relationship. He finally admits that she went to see Carter “I caught them together,” he confesses. They begged him not to tell. Ridge hopes this means that Quinn is out of his dad’s life for good, but he finds it odd Carter would do this again. Justin explains that they told him they weren’t cheating. They explained. Ridge doesn’t stay to hear the explanation. He and Brooke race out to tattle on Quinn.

At his house, Eric calls Katie good company. She tells him he’s not so bad himself. She brings up Quinn and he tells her not to, though he’s “wildly curious” about hers and asks how things are going with Bill. She talks about how independent Will is and how rough it was having Bill in jail. She tried to shield him from it all. Eric asks if she still sees a future with Bill, knowing they were considering reconciling with him before the ridiculousness of the hit and run happened. “Sometimes I feel caught in this endless loop,” she admits. She may be too stubborn to let go. She tears up and says she can’t forget that the man she gave her heart to gave his to someone else. She’s heard him say Brooke’s the love of Bill’s life. She wonders if Bill would choose her over her sister and then hates even thinking of that. Doesn’t she deserve to be the love of someone’s life? Eric thinks so. Katie sobs as she talks about Bill and how he does everything for himself, though the way he tells it, he is doing everything for his family. She talks about vulnerability with him and leaning on family and doesn’t feel like he hears her. “I think Bill hears what he wants to hear, and sometimes I don’t think we speak the same language.” Eric feels the same about his marriage. “But unlike Bill, you would do anything for your marriage,” Katie says. She’s torn between finding his volatility attractive and dangerous to finding it crushing to their relationship. At the end of the day, Bill is who he is and likes behind him. She admits she thought she could change him and knows it’s silly. Eric nods. She knows people only change for themselves. Eric thinks Bill’s a fool. A man in love will give a woman everything she needs, according to Eric. If he’s not then he doesn’t deserve her. Katie argues that she knows he loves her. He hopes she isn’t going to reconcile with Bill just because she wants to be alone. “Isn’t that what you’re doing with Quinn?” She counters. She again asks where the heck Quinn is and when he won’t say, she begs. “Quinn has this beautiful charming husband. How could she not be satisfied?” Eric says she is. “I’ve done something, Katie…” he tells her. Katie claims she wouldn’t judge him. He wouldn’t blame her if she did. He admits he wanted things to be the same but they weren’t…

Ridge and Brooke pound on Carter’s door. Brooke gripes, “How dare you?” They demand to know what’s going on and why she’s cheating with Carter again and Quinn blurts that they’re not. Eric knows. Brooke’s shocked.