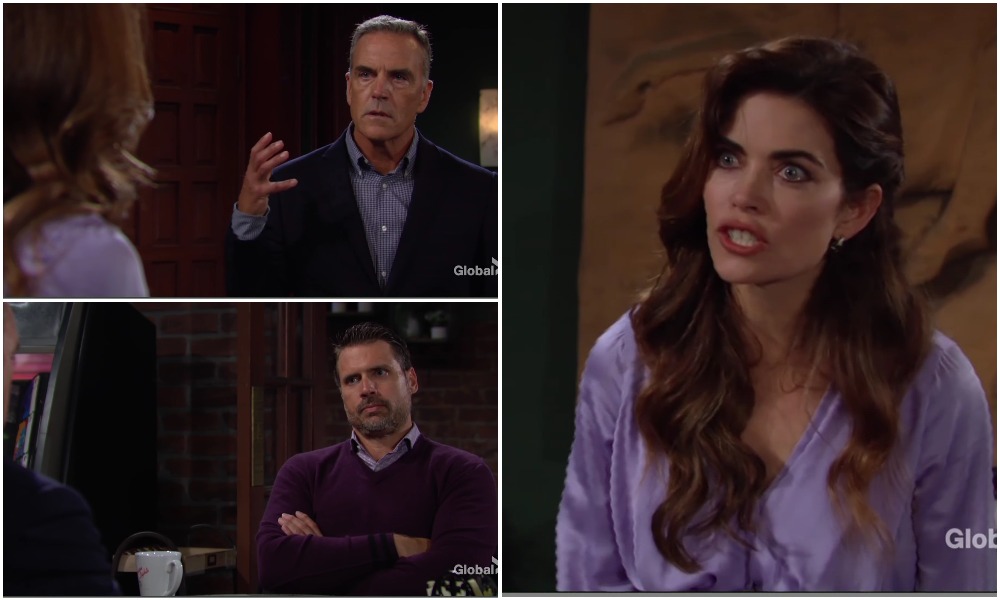 Soaps Spoilers has the Canadian Y&R day ahead recap for the Wednesday, September 29, 2021 episode, which airs in the USA Thursday, September 30, that is uploaded live by 5:45 PM EST daily. In the previous episode, Billy didn’t believe Ashland has cancer. In this episode, Ashland reveals he isn’t who he says he is, and Victoria has a fit. Meanwhile, Mariah yells at Tessa for another betrayal.

At Crimson Lights, Victoria demands her brother tell them what he’s uncovered about Ashland in New Jersey. Nick asks Ashland, “Why don’t we talk about a 40-year-old car crash that killed a guy named Bobby Defranco?” Ash is shaken up. It’s a name he never thought he’d hear again, especially from someone in Victoria’s family. Victoria asks who the dead man is. “That dead man is me,” he admits. He was Bobby before he became Ashland Locke. Victoria shrugs it off, surprising Nick. “A young man did die,” Nick says, arms folded over his chest. Ash realizes it’s foolish to think he could run from what happened. Everything he told them about his past is true, but there was more to it. Someone who gave him the courage to change — a friend of his who his parents didn’t even know. His name was Ashland Locke. They were kindred spirits. They did a lot of dumb things sixteen-year-olds do. They got matching tattoos. His dad saw it and beat him up so his friend took off with him. They bummed around and worked odd jobs on the Jersey coast. They ended up in Keansburg, where his dad made an appearance. The real Ashland hid him and afterward, they were inseparable. They were family. His friend wanted to be in broadcasting and snagged an interview with Camila Rhodes. His friend couldn’t make the interview because the night before, they were driving around in his old Camaro — fast. His friend lost control of the car and wrapped it around the tree. Ashland was ejected from the car and his friend was pinned against the steering wheel, with no pulse. The car was on fire and Ash tried to get him out but he couldn’t do it so he threw his own wallet down and grabbed his friend’s. A car pulled up and Ash took off. It was then, he made the decision to become Ashland Locke as Bobby Defranco went up in flames. He stole newspapers to keep up on the developing story. The police assumed Bobby Defranco was the one driving the car. His dad identified the corpse and identified him, based on the tattoo on his calf. DNA testing was limited in those days so there was no reason to investigate further. He took his clean slate and got the job with Rhodes. “Ashland Locke saved my life when my father was coming after me and I wasn’t able to save his.” Nick says he tracked a reporter down who was in on the story. The driver of the car that pulled up that Ashland ignored said he saw a kid running into the woods but since the man was drinking, the cops ignored him. Ashland is ashamed of himself and not telling Victoria the truth. “How could you do this?” Victoria says, turning on her brother. She takes off, angrily. Nick’s disgusted that Ashland took a dead man’s wallet and lived his life. Ashland says Nick will probably never understand the hard choices he had to make. He goes.

At Grand Phoenix, Tessa brings Mariah chicken piccata in bed for dinner. Mariah’s grateful. “You take such good care of me.” A knock comes on the door. Tessa finds Sharon outside. She heads inside and Tessa gives them time alone. Sharon pulls out some things from her bag. Mariah makes jokes and that warms the cockles of Sharon’s heart. She puts on her mama/psychologist hat. “How are you really doing?” She feels better — stronger. Sharon asks why she moved out of the Chancellor estate. She heard some things. “What am I? The town gossip?” Sharon denied that. Mariah admits it was harder to be around Dominic after they bonded. “It’s hardcore strong,” she admits. Sharon heard she wants a baby. She thinks it’s wonderful but shouldn’t be a knee-jerk reaction. Mariah doesn’t believe it is. She’s also angry that Tessa opened up to Sharon.

Abby rocks Dominic, trying to get him to sleep at home.

Devon and Amanda get ready for their date when Moses races inside with Faith after him. Their date is coming off to a shaky start. Moses returns with his wallet. Amanda’s curious as to what they’ll do but though he’s told Devon, he’s been sworn to secrecy. The kids leave.

Abby finds Tessa at the bar at Society and asks how Mariah is. Tessa lets her know she’s visiting with her mama. Abby misses them and wants to get together. Tessa says Mariah’s starting to get back to her old self. Tessa receives a text from Mariah, who says, “We need to talk.” She sees Amanda and Devon on her way out. Abby appears and congratulates Devon and Amanda on moving in together. They discuss Moses and Faith’s date and how they didn’t tell them where they’re going. Abby’s thrilled and can’t believe her niece is dating. Imani texts Amanda. Naya is ill and she’s taking her to the hospital. Amanda goes. They worry and then discuss Tessa, who is worried over Mariah.

Ashland finds Victoria at Newman Enterprises. She asks why he didn’t tell her the truth. “Shame,” he reveals. It was too painful to talk about. He never told another living soul. It’s haunted him ever since. He thinks about it all the time. What if he was able to somehow help pull Ash from the wreckage? How would it have made his life different? He tries to tell himself that he would have done the same thing had the situation been reversed. If his life took another direction, it never would have lead him to her. “I have never loved anyone else the way I love you but if this is what breaks us up, I completely understand.” Victoria admits it’s a lot to process and she needs time. He leaves her alone. Nick appears and Victoria tells him she doesn’t want to talk to him. He gets it. He betrayed her trust. Nick would do it all over again. Victoria says Ashland didn’t do anything illegal. How does something that happened 40 years ago mean he shouldn’t have love or happiness? She asks him to go and tells him not to bother flying on to Tuscany. Nick thinks this news concerns his sister more than she will admit.

Faith and Moses arrive at Crimson Lights. They discuss their dinner in a private room at The Top of the Tower that Victor arranged for them. Moses had Devon’s new singer serenade them. She’ll never forget it. It was the most perfect night ever. Sharon watches nearby and smiles brightly.

Tessa returns to Grand Phoenix and Mariah reads her the riot act for betraying her trust twice now.