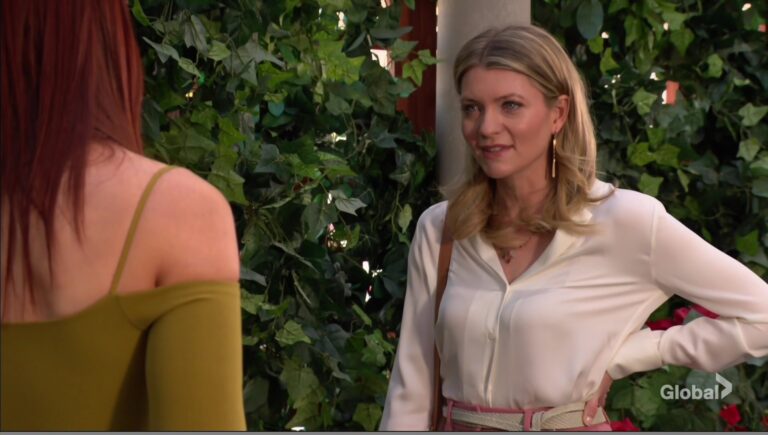 This is the Canadian Y&R day ahead recap from the Tuesday, June 8, 2021 episode, which airs in the USA Wednesday, June 9. In the previous episode, Mariah admitted to Tara she doesn’t trust her, and in today’s episode, Nikki warns Adam, Phyllis and Nick argue, and Sally propositions Tara.

In the lobby of Grand Phoenix, Phyllis and Nick don’t see eye to eye on him doing business with Newman Media. She doesn’t trust him. “You’ll be under his thumb again.” Nick claims his eyes are wide open. She reminds him “Adam taints everything he touches.” Nick’s not singing his praises. Talk turns to flirting and then Nick has to take off.

Nikki finds Adam working in the office. She’s worried he’ll leave her husband heartbroken again. Adam hoped Nick had inspired her to give him another chance. Nikki asks why he made Victor upset, earlier. Adam calls it a business disagreement. She’s worried about Victor’s health. Adam won’t jeopardize that. He wants his dad to be proud and to be a man Connor can respect. Nikki threatens to show no mercy if he reverts to his former self. Adam nods. She asks after his relationship with Chelsea. He takes responsibility for her going over the edge but doesn’t know what will happen between them.

Related: Y&R rant Billy & Victoria need to move on from each other

Rey and Sharon discuss what they’re doing once they’re in Florida for their second honeymoon. He’s excited to dance with her and does some crazy moves that make Sharon laugh. She says it all sounds perfect but there’s a problem. She’s nervous about leaving Faith. They talk it over. Nick shows up and talks about having Faith stay with him. They discuss Summer and Kyle’s wedding plans. He’s given them his blessing but he’ll still worry. Sharon commends him on his effort. Faith arrives after a half-day at school. She talks about going to her rehab and is less nervous about it. She’s starting to think about college. The parents are impressed. She admits hanging with Moses helped. Adam appears. It’s good to see Faith up and about. She credits him but he tells her to stop thanking him. She laughs and goes. Adam doesn’t like what Rey’s doing with Chelsea. The men stand up and everyone is worried that Adam is causing a scene. Adam doesn’t like him visiting Chelsea in the hospital. They rehash why she’s in there. Rey keeps it up and Nick defends his brother. “Refighting old battles isn’t doing anyone any good.” Rey tells Adam to stay away from him and Sharon. Adam has no intentions of hurting them. He goes and Rey gets a text. Michael wants to see him.

Tara finds Summer in the park. She’s glad to hear that Summer and Harrison connected and was glad to hear that she and Kyle are planning on marrying. Summer says Kyle will still make Harrison his number one person. Tara seems thankful and when Summer leaves, Sally turns up. Tara tries to take off but Sally begs for five minutes. She knows Tara’s set her sights on Kyle. Sally saw the look on Tara’s face when Summer talked about resuming wedding plans. Tara thinks Sally’s talking crazy. Sally’s not judging. She’s got a way to get Summer out of the way, out of both of their lives. All she has to do is make Summer want to take a job out of town. Tara smiles and asks how she’s supposed to do that. Sally needs her to get Kyle to fall back in love with her. Tara says nothing and Sally says, “You’re intrigued at least.” Tara’s not sure why she’s bothering to listen. “Your plan is ridiculous” She has no time to play these games. She’ll forget they had the conversation. “Please, leave me alone,” she says. Sally invites her to call if she changes her mind.

At Society, Ashland is upset by news on a call. Victoria comes by and he apologizes that he has to fly back to New York. He invites her to fly with him for dinner in Manhattan. She’s not sure it’s a good idea since he’s in the middle of a divorce and custody case. He snickers. He doesn’t think it’ll impact that.

At the Abbott house, Summer’s glad that they’re back on track. She’s looking up the vendors they were going to use and they can pick up where they left off. He’s excited. Summer admits she told Tara, who seemed supportive. Kyle’s glad and happy she’s been supportive with Harrison. They talk about sex once they return to their suite. He invites her for playtime with his kid. Harrison appears a while later and they go outside to play I Spy. Later, Tara turns up. Ashland texts her and Kyle to ask to meet without lawyers. They put Harrison upstairs and ponder what Ash wants.

At Newman, Victoria and Nikki talk about Adam and how he claims he’s changed. Victoria shrugs it off. She has more important things to think about. Nikki questions her. She shrugs her mother off. They talk business and Ash calls. He asks if she has changed her mind. She declines and grins when he tells her it won’t be as much fun without her. They disconnect and Nikki pries. Victoria doesn’t want to give her secret away.

Adam visits Chelsea in the psych ward. He spoke with Connor who asked to talk about her. Chelsea is on edge. Adam reassures that he told Connor she misses him but that she had a treatment when he called.

Ashland turns up at the Abbott home and Kyle asks, “What the hell do you want?”