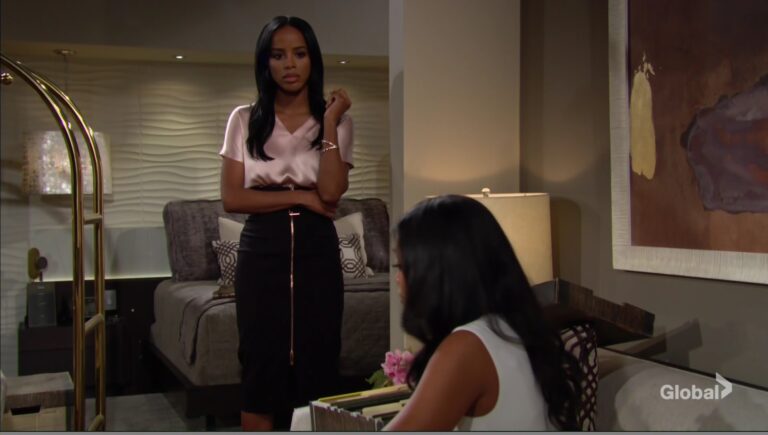 This is the Canadian Y&R day ahead recap from the Monday, June 7, 2021 episode, which airs in the USA Tuesday, June 8. In the previous episode, Summer & Kyle resume wedding plans, and in today’s episode, Mariah goes into protective mode with Tara, Billy learns Victoria’s dating Ashland, and Imani and Amanda butt heads.

At Crimson Lights, Victoria and Billy discuss his scathing article about Newman Media. Billy isn’t letting his guard down, knowing her father will retaliate. Victoria’s grateful that he didn’t tell her father that she’s the one who outed him as letting Locke have a heart attack while he forced him to sign over his company. Victoria thinks this is Lily’s influence. Later, Ashland calls and Victoria swoons as she accepts another dinner date. “You’re swimming in some pretty treacherous waters,” Billy says. “You live your life and I’ll live mine,” Victoria retorts. Imani finds Nate sitting outside. He invites her to sit. They talk about how busy he is and that everyone wants medical advice when he’s out. He says a woman in a store asked him to look at a mole. Imani laughs and Elena sees them sitting together and looks upset. Introductions are made and Imani leaves. Later, Tara calls her lawyer about asking Ashland to keep paying the nanny. Mariah overhears and introduces herself. Mariah knows who she is. Tara is shocked that she eavesdropped on her conversation. The Abbotts warned her about who she should speak with. Mariah says they were probably talking about Sally. Still, Tara can’t trust her. Mariah nods. “I get it. Why should you trust me when I can’t trust you?” Mariah says she’s Kyle’s friend and he was a hot mess in New York. When they got together. Maybe Tara didn’t notice or care or she saw how vulnerable he was and took advantage. Tara isn’t taking advantage. She’s focused on caring for her kid. Tara’s surprised that Mariah knows about the kid being Kyle’s. Mariah asks how Summer’s doing with this. Jack walks in and eavesdrops as Tara says she just hopes they work things out. She doesn’t want to be a problem for them. Mariah admits Summer isn’t her favorite person but she and Kyle are meant to be. Tara admits, “That sounds lovely.” She says hi to Jack and heads home. Jack learns that Mariah just met Tara and that Kyle used her as a sounding board so she was discussing what was going on between them.

At Society, Adam tells Victor that he has an idea for Newman Media to have a streaming platform with investigative coverage all across the states, not just in the biggest cities. Victor is surprised by his idea since he was against getting rid of Chance Comm as competition. Adam argues that they can get rid of all of the competition, not just Chance Comm. Adam says he’s changed. He’s gone off the rails each time he tried to get his life back. This time it’s different. Vic’s happy to hear but they argue about how to handle Billy Boy Abbott. “We’re going to look petty and vindictive.” They do more business and Victor again wants to wipe the floor with Billy Boy. Adam thinks it’ll set things back with Nicholas but “Nick can’t stand Billy Boy Abbott,” Victor says, leaning in. They can’t embolden him or he’ll come out with another expose to try to ruin them. Adam insists his father let him do things his way. Victor agrees. For now.

The PI shows up at Amanda’s and tells her and Devon that Miss Lewis, the foster family, opened up their attic to her. She admits she’d like to find that little girl who is all grown up now to tell her how desperate her father was to find her. The lady leaves and Devon and Amanda go through the boxes she’s left. Amanda finds calendars and sees Richard’s name in one of them. She bemoans how different her life could have been if he was able to make that appointment. Devon thinks Richard sounds like an incredible guy. She can’t get over that her father’s last day was spent looking for her. They ponder about what’s up with Sutton. Devon asks if Naya had a breakdown before because otherwise, why are they stopping her from investigating properly? She’s not sure but Sutton’s pride may cost him.

Jack, Phyllis and Nick meet at the Abbott mansion. Tara’s out and Harrison’s with his nanny out back. Summer and Kyle wander in with pastries and orange juice. They have good news. The wedding is back on! The parents don’t look happy. Nick asks what changed. Phyllis calls Ashland hateful toward women and thinks it means a terrible custody fight. Summer tries to explain that she took some time to think. Whatever happens, she knows Kyle will handle it with honesty and responsibility. He’s been compassionate and respectful and she can’t wait to be his wife. Nick nods. It sounds like she made up her mind. Phyllis eats one of the pastries when Summer asks her to tell them they’re happy for her. Nick only wants to protect his daughter. Phyllis says this situation will change their future. She thinks they should take a step back but that’s not what Summer wants. She feels she’s already committed to him. So does Kyle. The parents eventually say they’re on board. Later, everyone has dispersed and Kyle brings Harrison to meet Summer. She gifts him a toy and he plays with it. She goes and Tara returns and learns that Harrison met Summer and he filed a paternity claim. They agree it’s a big moment. She smiles and thanks him for making it official. She’s happy to hear that his wedding is back on. He goes to get some food and she shakes her head and loses her smile.

Devon finds Elena with Nate. They discuss his new label and Nate offers to stay with Moses if he needs to. Devon’s grateful. He goes and Elena notes the progress between the two men. Elena talks about Carol’s move and how she’s applied for a job and got an offer. She loves Genoa City but the idea of having a fresh start sounds exciting to her. Nate’s surprised to hear she’d make a change. Elena would move into Carol’s. It’d be a step up in her career. Nate didn’t know she was considering this and can understand why it’d be hard to turn down. She asks if he can think of a reason she should turn it down.

Imani visits Amanda, who tells her about finding the calendar with her father’s name on it. Imani suggests she stick to preparing her father’s defense. Amanda argues that it’s what she’s doing and needs all evidence to come out at trial. Imani says that’s not what Grandfather wants. Amanda crosses her arms. “I’m going to need to hear it from him.”  She doesn’t believe he’s making a decision for her sake and asks Imani to set up a meeting. “It’s time we settle this.”