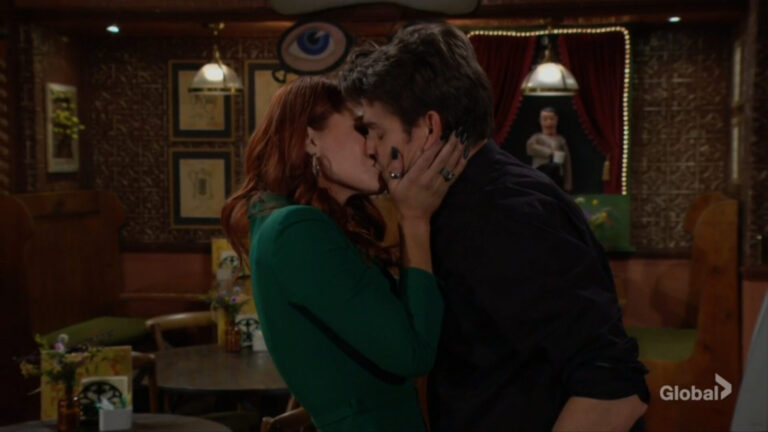 In this episode of CBS’ The Young and the Restless, Summer has an idea for Noah, Sally asks Sharon for advice, and Chance takes statements from Nick and Victoria. In the previous episode, Nick and Ashland’s fight ended tragically, and Locke went missing after being presumed dead.

At Victoria’s, Nick searches the house and tells her there is no sign of Ashland. They both checked his pulse and he was dead. How could they be wrong? Nick says they need to assume he’s alive and got away.

She cleans Locke’s blood off her hand with a kleenex. They keep mulling over what could have happened. “The good news is, we didn’t kill him,” she says.

Victor walks in and announces he’s there to protect them. His security detail tipped him off.

Chance arrives and asks if everything is okay. Sitting down, the cop gets her to walk him through what happened tonight.

She recaps Locke’s visit, explaining that he said awful things and grew agitated when she said they had no future. He grabbed her and she knew he would hurt her. She got away from him and Nick showed up as she realizes Ashland wanted to kill her.

Nick explains how things got physical with Locke. He socked him in the jaw and he fell and hit his head. When they checked his pulse, they couldn’t find one. Victoria claims she tried to resuscitate him.

Nick adds he had to go out to get some air because the thought of killing someone, even Ashland, was getting to him.

Victor says it’s obvious they were acting in self-defense. Chance agrees. They have no idea where Locke disappeared to.

The cop looks at the blood on the floor and assumes Locke was knocked out. He must be alive and is disoriented somewhere. Chance is going to get some officers to look for Ashland’s car. He’s sorry all this happened.

Victor suggests they send a squad car to the Abbott estate to keep an eye open for Locke. Victoria tells Chance that she wants Ashland arrested.

Before the cop leaves, he asks if there is anything they left out. They say they haven’t. Once Chance is gone, Nick asks Victor what really happened tonight.

Summer and Kyle drop by the rooftop of the GCAC for date night. They spot Allie and Noah and she wants to catch up with him. He agrees and they join their relatives. Summer says it looks like Allie is settling into her adopted city.

After some dancing, Allie and Kyle go off to get drinks and Summer starts quizzing Noah about his date. He tells her that he’s leaving New Hope but not town. This isn’t a great surprise to her. Their father has been surprisingly accepting.

He wonders if Nick has always been more hands-off because Victor was so heavy-handed with his kids.

At the bar, Kyle tells Allie he’d like to get to know her better. She knows he’s been busy with work and family. They chat about Diane and she admits she’s undecided about her.

He’s sorry she’s caught up in that but she’s good at steering clear of trouble. She asks if being an Abbott is as perfect as it appears to be. He’s not sure about that. They chat about her dad and the family she never knew existed. Everyone has been warm.

They discuss Ashley accepting her and how thrilled she’s been to join Jabot. He’s glad she’s found her place. She looks over at Noah and says she’s glad too.

When the two couples sit together, Noah talks about his plans for the Top of the Tower. Summer doubts that will happen given Victor’s attitude to the place. Noah reminds them Victor was a stud in the 70s.

Kyle reminds him he was less of a Bowie and more of Burt Reynolds. Allie doesn’t know who that is. Summer suggests that there is a better spot at the Grand Phoenix. Noah has to think about that and will keep it in mind.

They toast to new possibilities.

Adam wanders into Crimson Lights looking lost. Sharon offers to get him a drink. He asks how she’s doing and they catch up. She heard about the personnel changes at Newman Enterprises.

She’s surprised that Nick decided to go back to the company. Adam claims his refusal of the CEO job was a defiant statement of independence. She suggests it was a knee-jerk reaction and he’ll change his mind.

He isn’t going to do that. He’s sick of trying to be part of the inner circle and has cut ties with Victor. Sally eavesdrops from the patio. Sharon tells him she’s seen him go down this road and he never gets very far.

Adam is adamant it’s for real this time. They discuss the “tortured dynamic” he has with his father and he repeats that he can’t have autonomy as long as he is at Newman.

She gets that and has seen hints of the good man she knows he can be. Sharon wonders if Sally has played a role in that side of him coming out. He announces that they ended their relationship.

Sharon’s sorry to hear that, even if she doesn’t care for Sally. She admits that Spectra cam to see her to talk about him. She was suspicious but became convinced she cares about him.

Adam claims she was holding him back. Sharon points out he’s an acquired taste himself. He’s vague and doesn’t want to get into the details.

She reminds him that he was the person she opened up to about her grief. Grudgingly, Adam admits he set Sally free so she could soar. He didn’t want to be an albatross around her neck.

Sally runs in and declares that she knew he was lying to her. He’s not doing her a favor. All she wants is to be with him.

Sharon leaves them alone. Sally doesn’t know if she should be furious or throwing her arms around him. She’s sure he still loves her and has just made a crazy grand gesture.

He claims he was just lying to Sharon. She doesn’t buy it. He makes excuses but she thinks he’s scrambling for explanations.

When he accuses her of following him around, acting pathetic and desperate, she slaps him across the face and then kisses him. She asks him if he can really say he doesn’t miss her and their relationship. 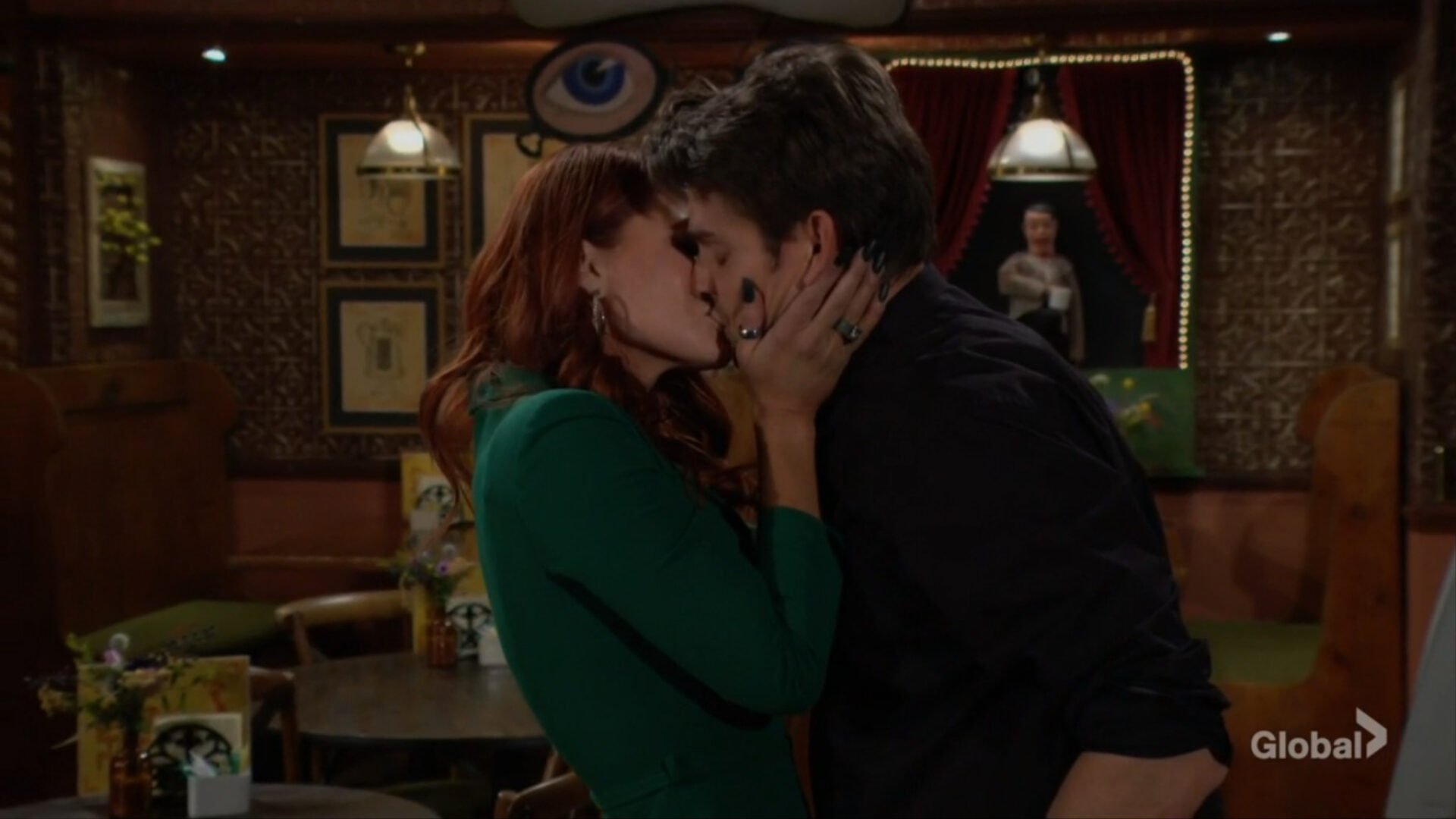 She’s sure he loves her as much as she loves him. What they have is much more than a job. They kiss some more and then he breaks away and tells her she’s making a fool of herself. “We are done,” he says, hobbling out.

Sally sits in a booth and Sharon comes over to talk. She’s always prided herself on being able to read people but she doesn’t know what to believe with Adam. He claimed the opposite to her that he told Sharon. Her head is spinning.

“Sometimes Adam can be hard to understand,” Sharon suggests. Sally worries she might be fooling herself. Sharon doesn’t know but guesses the truth is somewhere in the middle of what he’s been saying.

It still doesn’t make sense to Spectra. Sharon says it’s a Newman trait to protect people while pretending you’re not. Sally doesn’t know how to stop him from acting noble and get back to loving her again.

Sharon says there are no easy answers with Adam. She adds that her future at Newman would be precarious with Adam in the picture. He also has a complicated relationship with Nick.

Spectra doesn’t understand why the family dynamic has to have so much to do with Adam’s relationships. She keeps telling him that the job isn’t as important to her as he is. Sharon says she’ll have to find a way to prove that to him.

Adam checks into his suite at the Grand Phoenix. He thinks of Sally kissing him.