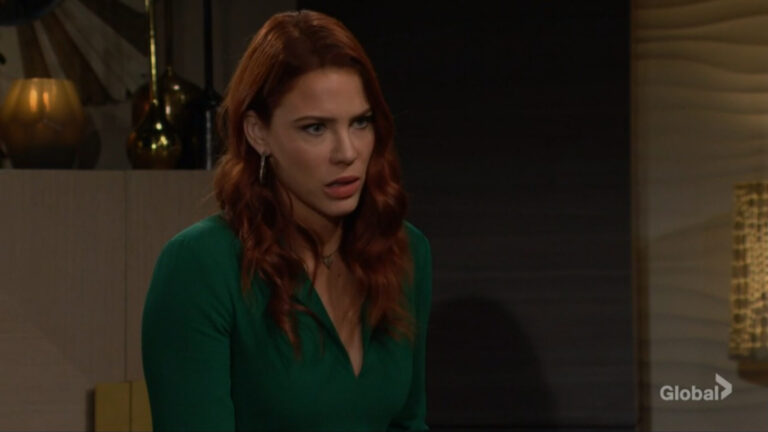 In this episode of CBS’ The Young and the Restless, Michael keeps his ears open, Nick brings Chance the ring he found, and Victoria’s family keep telling her she’s not responsible.

In the previous episode, Sally confronted and kissed Adam, and Nick asked Victor what really happened to Locke.

At Crimson Lights, Chance gives instructions to a cop to look out for a trail of blood. Michael shows up. Victor has brought him up to speed on what’s happening and asks if there are any leads.

He’d appreciate a heads up. The detective assumes he’s fishing.

Michael claims he cares about the Newmans and Victor is anxious for news.

Chance says he has to play this by the book and won’t let his father-in-law interfere. When the cop turns away, Michael starts making faces.

At Victoria’s, Nick asks his father what happened to Ashland tonight.

Victor insists he doesn’t know any more than they do. He assures his daughter they won’t let anything happen to her and suggests she pack a bag and move into the ranch for awhile.

Nick worries about what Locke did. Victoria thinks he’s so angry he’s unstoppable.

Victor assures his son he would have done the same thing to protect them. Nick knows he could have been facing some serious legal issues but it all pales in comparison to what could have happened to his sister.

They tell him what a good person he is and then Nick offers to light some sage to get rid of the bad energy in the place. His sister hugs him and thanks him again.

She leaves with her father after packing a bag.

Alone, Nick stares at the blood on the floor and flashes back to punching Locke. He snoops around on the floor.

Victoria and her father drop by the office so she can pick up some files. Nikki is surprised to see them at work. Victor announces their daughter is moving in with them for awhile. Victoria explains why and what a hero Nick has been.

Nick calls and tells his sister he found a signet ring on the floor.

She confirms it’s Locke’s. He was waving it around tonight and put it back in his shirt pocket. She never wants to see it again.

Sitting down, Victoria recaps her fight with Ashland to her mother.

Nikki’s jaw drops when she hears that Locke lost his pulse and then disappeared. “How is that even possible?” Victoria asks.

Nikki is just relieved that no one killed Locke. They have nothing to apologize for or regret. Victor walks out to take a call from Michael.

Baldwin tells him not much has happened but he’ll keep him informed.

Victoria tells her mother that this has triggered memories of what happened with JT.

She keeps falling for damaged men and treating them like failed companies she can make profitable again. Everyone warned her about Locke but she didn’t listen and made excuses for him.

Victoria makes it clear that she doesn’t feel bad about Ashland. It felt good to make him pay, but maybe she took too much. Maybe she broke him… Her mom insists he’s only learned a valuable lesson.

He lost. His feelings got hurt. That’s his problem.

Nikki tells her not to waste one ounce of grief on him. He never deserved her.

Victor returns to agree with this. “Thank you daddy,” his daughter says.

Nick drops by Crimson Lights and Michael fills him in on Chance not saying anything. The Newman wants to talk to the cop.

Before he can, Michael quizzes him about his feelings.

Nick admits he wishes Locke was gone but imagining he killed him is harsh.

Michael assures him he’s a good man and justice will be served. “Take care of yourself,” he urges.

Nick goes over to Chance and hands him the signet ring he found. He tells him all be knows about it.

The cop admits they haven’t found any signs of Locke. “Is there anything else you want to get off your chest?” he asks.

The detective gets a call and has to go. He says his officers have found a car in the bottom of a ravine. He will let him know any pertinent details when the time is right.

Adam wakes up in his suite at the Grand Phoenix.

He looks over and sees Sally on the sofa.

She announces she is giving him a second chance so he can make the right choice and they can reclaim their future.

Getting up, he reminds her he told her to stay away. She knew this, the place where they have made so many memories, is where he would go.

He suggests she’s reading too much into this and doesn’t know him at all.

Adam claims he used calculated acts to seduce her. She reminds him that she pursued him. She’s not going to give up and will endure whatever he can dish out until he drops his defenses.

He repeats they are moving on in opposite directions.

“There is no future between us,” he insists. She tells him he can protest all he wants but she knows what exists between them and won’t lose it.

Adam claims he didn’t mean to hurt her.

She doesn’t want him to explain her feelings to her anymore and insists she knows exactly why she wants to be with him above anything else.

Sally reminds him that her parents disappeared early in her life and left a big black hole.

Her sister and grandmother became her constants while everything else kept falling apart. He suggests she call them. Sally doesn’t want advice.

So many times, she’s had her dreams dashed but always knew there was the right person out there for her.

Then she met him and the black hole in her vanished. It was like they knew each other in every possible universe. The stars are aligned for them and she doesn’t want to stand between him and anything he wants.

They can have those things together.

He just needs to admit that he still loves her and stop resisting this so they can find their way back to each other.

Adam tells her that was beautiful but nothing has changed and he doesn’t feel the way she does.

She reminds him of when they started working together and how much they wanted each other. She’s sure he was looking for a woman like him his whole life.

“That was then. Life moves on and so do I,” he says. She claims she knows him and what’s real and eventually he will come around and realize this is a massive mistake.

The tragic thing is that it will be too late by then.

He says what’s done is done. She heads for door and informs him she will resign from Newman media first thing in the morning.

Once she’s gone, he has a drink and calls to book a flight to Las Vegas.

Sally arrives at Crimson Lights and finds Nick looking miserable. She offers to buy him a coffee.

Back at Newman, Michael arrives and tells Victoria how sorry he is for what’s happened. She leaves with her mom. Michael tells Victor that Chance’s men have found Locke’s car with him inside. “Good,” Victor says.

Thursday’s Y&R recap: Nick’s suspicious of Victor’s story about what happened to Locke.