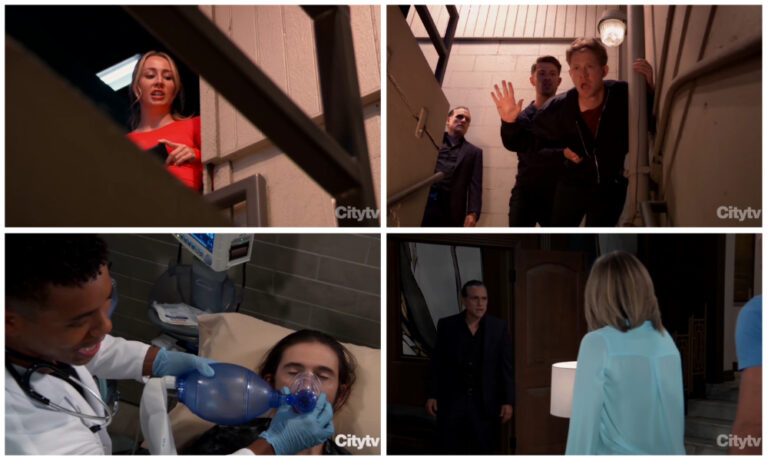 We also have Wednesday’s GH recap where Spin confessed to Maxie, Selena offered Curtis some help, and Linc wanted to give Chase a recording deal.

Dex chases Felty down the stairs of some warehouse. Sonny appears and complains that he’s been exploiting a grieving mother in Sasha. He punches Felty in the gut and says he offended him. “People who offend me tend to disappear, understand?”

Dex dangles Felty over a long stairwell to warn him of what could happen before Dex starts kicking Felty in the guts. Felty cries out in pain.

Dex doesn’t stop. He beats him with a belt and Sonny says killing him wouldn’t be enough. Just then, Joss appears.

She’s been recording the beat down. She followed him and can’t believe they beat the pulp out of some guy and bury him where someone will never find him.

She thinks it’ll send her to prison for the rest of his life. She leaves and he follows her. If she has him arrested, it’ll hurt the whole family.

She shoves his amnesia in his face. The family needed him there. She thinks he was having too much fun with Nina to care that he had a family elsewhere.

He asks if she’s really going to ruin his life and put him in prison and hurt her siblings. She yells that she likes how he’s putting this on her.

He did this! Dex tells Joss that he was forced to do this. She doesn’t care. She tells him to keep his distance. “I have pepper spray.” Dex says he’s not going to hurt her. He was only told they were to scare Felty, not kill him.

He explains that the man was pushing drugs on Sasha and that if he goes to jail, his life will be ruined. Joss considers that they were never going to murder the guy and deletes the recording.

On a date, Valentin gives Anna champagne and a flower and says, “To you, the most beautiful sight I have ever seen.”

She cringes and says she can’t do this anymore. He asks why not. “The dishonesty,” she says.

He asks her to stay. She sits and he says he hasn’t lied to her.

She gets up to go and he admits he’s held things back. Things he wants to tell her but can’t.

She lets him know she knows he left the clinic weeks before he returned to Port Charles. Where was he? He questions her checking up on him. He says she doesn’t know the whole story.

Everything he did, he did for Charlotte. He left there for the same reason he put Charlotte in boarding school.

He had a severe infection in his spine and was moved to another clinic for extensive physical therapy after surgery. He’s been trying to protect her from his enemies. Anna asks why he kept it from her. He was helpless in a hospital bed and didn’t want her to see him like that.

He says that they keep taking a step forward and two back. She asks if she broke his trust by checking up on him. He worries he’ll lose her, especially when she looks at him the way she’s looking now, (into his eyes). She suggests they don’t think of that, or anything at all.

She kisses his hand and they start making out.

At the restaurant, Ava insists Nikolas not let her have a third martini.

Trina’s trial didn’t go well, she explains. They discuss it at length.

Curtis bangs on the bartender’s door. “Hey Oz, open up,” he says. Esme gasps as Oz passes out from the Tramadol and she takes off before Curtis bashes his way inside.

He slaps Oz to get him to come around and then asks what he took, before calling the cops and paramedics. Meanwhile, Esme eavesdrops from the hall as the cops say they’re treating this like a crime scene.

At GH, TJ works on Oz. He comes around and leaves the room. Molly appears and tells TJ that Trina’s trial makes it easy to see how broken their legal system is. She explains how the system works. She busted her arse to pursue justice and doesn’t see it working.

TJ’s sorry but he’s glad she’s not the one trying to put Trina away.

They recall old arguments when she joined the DA’s office. She’s starting to think he’s right about it being a losing battle.

Curtis appears and the three of them discuss Oz. Curtis lets them know he could be a help in Trina’s case.

A nurse rushes out and says to TJ that the patient is coding. TJ rushes in. They had to put him into a medically induced coma since his brain was swelling.

TJ goes to tell Curtis about it and the tests he needs to run. Curtis thinks Oz was drugged on purpose.

He thinks that the man met with Esme but can’t prove it until Oz regains consciousness.

At the house, Carly lets Drew in and Michael and Willow share their baby news. “Get outta here,” Drew says. He congratulates them.

They get champagne and cheer.

Later, once alone, Carly and Drew continue to drink and talk about her frustrating day and losing her hotel. She hates that she’s wining while so much more has happened to him. He jokes about how insensitive she is and tells her not to compare their issues.

His past is history. He touches her hair and she smiles. They stare into each other’s eyes and almost share a kiss. Sonny bursts in. “Carly. You gotta get your daughter under control.” Carly huffs out a sigh. He explains Joss recording him putting the fear of God into Felty and Carly’s shocked but asks what he wants her to do about it.

He wants her to talk to Joss but she refuses. Drew asks Sonny to leave and Sonny complains that this is his house. Carly and Drew beg to differ.

Carly tells him that if he ends up in jail, he’ll have conjugal visits with Nina. When he finally goes, Carly smiles, thinking she has him where she wants him.

Spencer appears to Ava and Nik and they discuss Trina’s trial. Nikolas gets a text from Esme, asking to meet.

He looks around, concerned and excuses himself to go outside. Ava tells Spence about how Trina and Joss went to the bartender to talk to him about Esme possibly being the one to buy that burner phone and that they wound up buying one, which makes it look bad.

Spence is beside himself. Esme tells Nik that she wants to come clean about them sleeping together.

Nik widens his eyes. He thinks they should put it behind them. She thinks she needs a fresh start.

He vows to get her reinstated at the psych ward tomorrow. She smiles and hugs him. He goes and Esme calls GH to ask about “her father Oz Taggerty.”

The nurse tells him that there isn’t much she can tell her without knowing she’s really family. She does let it slip that he’s seeing a neurologist, which Esme concludes means he’s in a coma. She grins to herself.

At the stable, Michael and Willow discuss how strong he sees his mother now. She’s happy and that makes Willow think that he might give Sonny some grace.