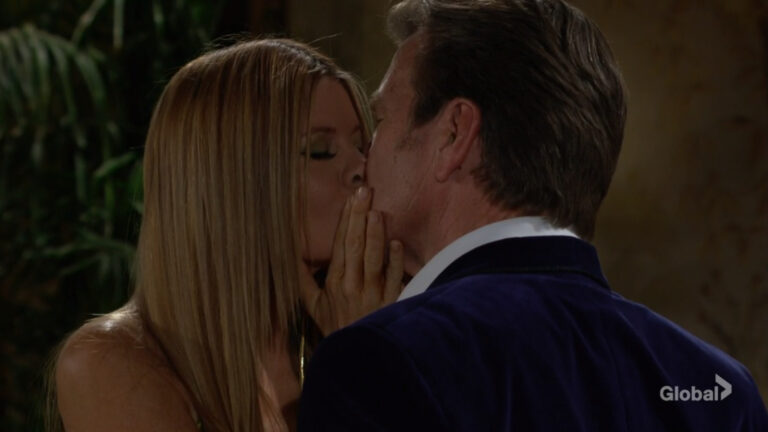 In this episode of CBS’ The Young and the Restless, Mariah and Tessa’s wedding winds down as Noah chats with Allie, Phyllis chases Diane out, and Nick takes Sharon home after they give the brides a surprise. In the previous episode, Mariah and Tessa said their vows, and Diane crashed the wedding. 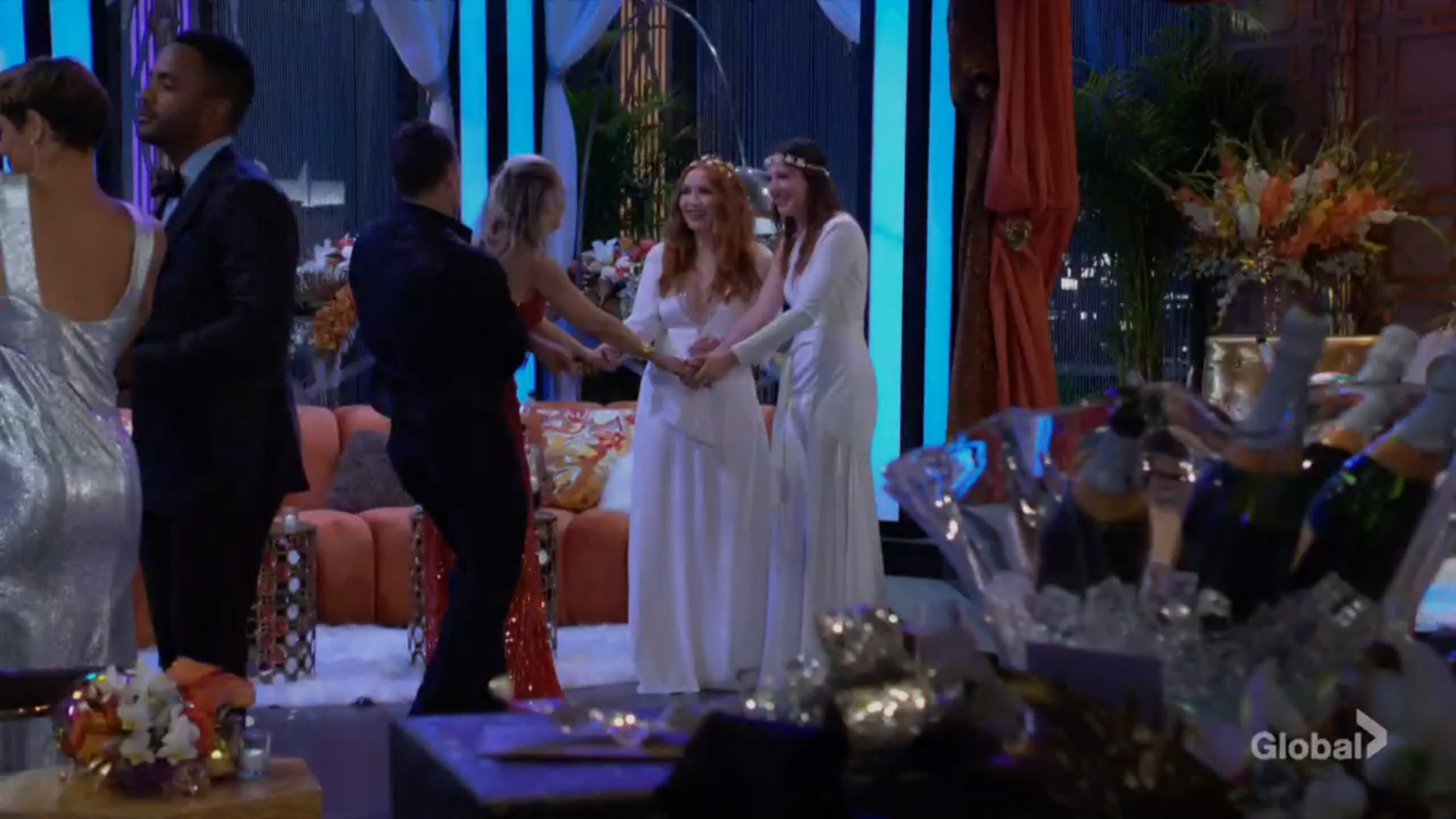 Mariah and Tessa’s party continues. Nick congratulates Sharon on pulling off a wedding for the ages. He asks her to dance and she recalls how much Rey liked to.

She’s not so sure, but thinks he should get out there. Sharon encourages him to ask Summer to dance. He’s eager to embarrass all his children today.

Once Nick is flailing around with his daughter, Kyle interrupts and takes her away.

His mother is there and wants to say hello to her. “Why?” she asks.

Phyllis tries to pull Jack onto the dance floor. He spots Allie standing alone and decides to ask her first. As they head onto the floor, Diane lurks around the corner.

Kyle introduced his mother to Summer. Diane tells her how impressed she is about what a success she has become. She thinks it’s wonderful that they have found love and happiness.

Diane hopes that she and Summer can slowly forge some kind of relationship. She promises not to be a typical annoying mother-in-law. “Nothing about this is typical,” Summer says.

Jenkins tells her she can be frank with her. Summer admits she is having a hard time wrapping her head around her return and what she did to Kyle was awful. But she will love and support him while he sorts through this.

That all sounds good to Diane. She’s just hopeful that her son will find a way to forgive her.

Jack and Phyllis watch their kids with Diane. He holds her back so she won’t make a scene. When she won’t back down, he says he should be the one to kick Diane out.

Red insists she should do it. She doesn’t have a big heart like him and promises she won’t cause a scene.

Phyllis strides over and interrupts. Kyle decides to walk his mom out.

“That bitch is trying to worm her way into our lives,” Phyllis warns her daughter. That’s what Summer was thinking too.

Tessa and Mariah tells Crystal and Kevin how amazing their toasts were. Crystal wants to thank Michael for having the charges against her dropped. Mariah toasts to Crystal’s return.

They talk about how great the dresses are. Mariah still can’t believe their dream wedding went off without a hitch. She calls everyone to toast to Friday the thirteenth.

The brides corner Sharon and they discuss the cake. Sharon thinks everything is phenomenal. Grabbing some champagne, she toasts them and their dreams coming true. That means a lot to them.

Sharon admits she’s feeling exhausted. They understand and appreciate all she’s done. Nick joins them and gloats about how he is crushing the glam. He wants to dance. When Sharon announces she needs to go, he insists on driving her. 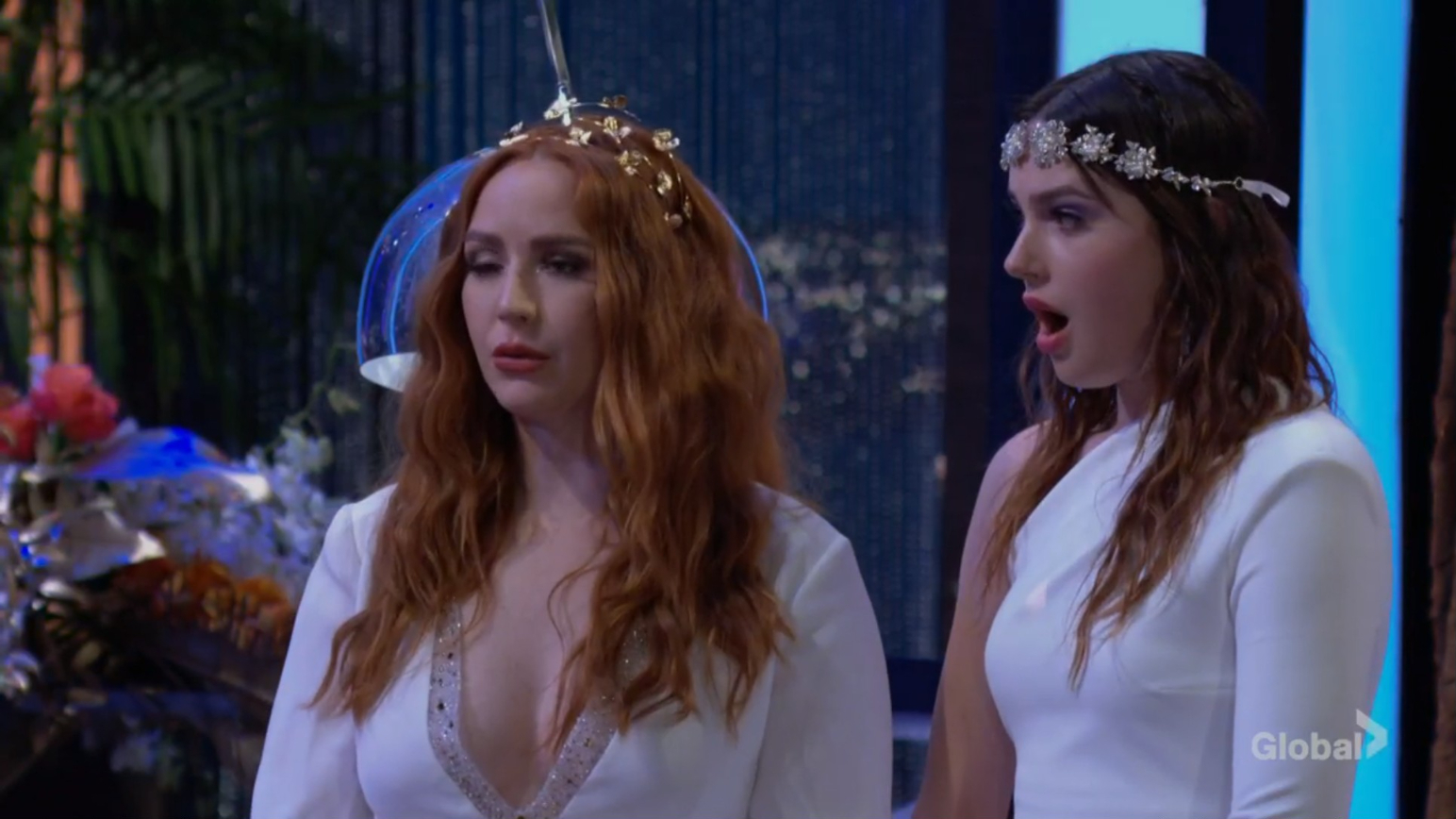 When the brides mention they are delaying their bigger honeymoon, Nick tells them it will be here faster than they think. He’s booked them a trip to Paris. They’re not sure they should leave Sharon now but it was her idea. They are shocked and hug them.

Sitting down, Mariah and Tessa say this is the best night ever.

Nick and Sharon say goodnight to Moses and Faith on their way out. They talk about her relationship with her mom. He talks about how lucky he is with his family too… and to have her in his life. They kiss.

Amanda and Devon watch them. She teases him about his baby brother. He’s going to need to have a talk to him about being in love at such a young age.

She’s sure those warnings will go in one ear and out the other.

Noah finds Allie standing in the corner. He apologizes for all his corny jokes when they first met. She admires how fanciful his designs for the party are. He decides to take that as a compliment.

Noah stares as Allie walks off until Crystal drags him onto the dance floor.

Later, Noah corners Summer at the bar. They catch up and she tells him what a great job he did, even if he is still annoying. After some joking around, the topic of Diane comes up.

Summer says she crashed the wedding and Kyle has escorted her out. She thinks it’s shaken him up.

Chance and Abby sit down and talk about how overwhelming all this must be for Allie. He hopes everyone is being as welcoming as her. She’s more worried about how Jack is handling things.

Chance recalls the vows they made. Back then, he had no idea of what would happen over the past year. It’s been tough, especially losing Rey. They both worry about Sharon.

She’s sure Sharon feels devastated. That’s how she felt when she thought she’d lost him. He’s the love of her life.

The brides whistle everyone to attention to give their final thanks. Before the brides can escape, Faith hands them a bouquet to toss.

It lands in Chloe’s arms. It’s too late for her so she tosses it. It lands in Abby’s arms. She tosses it once more and it lands in Jack’s hands. “I think I’ve been married more than anyone in this room,” he says. Everyone laughs and he makes a bow.

Summer corners her husband. She wonders if what he’s feeling is like what she went through when she didn’t know her paternity. She’s seen all she needs to see from his mother and doesn’t think she can be trusted.

Mariah and Tessa go back to their apartment. Flower petals are strewn around. They hug and tell themselves they really did it. The sky is the limit starting now. They kiss.

Nick takes Sharon home. She can’t wait to get out of her shoes and have some tea. He offers to keep her company. After he makes tea, she hopes the brides will always be happy, but she knows that’s not always possible.

He assures her they will always have a loving family they can count on. She thanks him for being there for her the past few weeks. Nick says she can always count on him.

Phyllis shows up at Diane’s hotel suite and accuses her of stalking Kyle. They bicker about who was the party crasher. Diane insists her son wanted her there.

Phyllis says Kyle doesn’t know what he wants right now but she’s sure Summer will convince him that letting her back into his life was a mistake. “You are a cancer! I want you gone!” Phyllis yells.

She was letting her stay there so she could keep an eye on her, but now she wants her out of her hotel. Diane says she can leave the hotel, but she’s not leaving town. She thinks both Kyle and Jack can forgive her.

“You are delusional!” Phyllis sighs. After she leaves, Diane has a drink and thinks about Phyllis dancing with Jack. She cringes and shakes her head.

When Jack and Allie get back to the Abbott estate, she asks him how many times he has been married. Before he can explain, Phyllis shows up. Allie decides to go upstairs.

Phyllis tells Jack that she kicked Diane out of her hotel and thinks she’s leaving town. She’s worried Jack isn’t on board with this. He wants his son to get closure and worries that putting pressure on like this could make things worse.

She apologizes for letting her hatred get the better of her. He asks her not to apologize. She was being herself and he likes her. 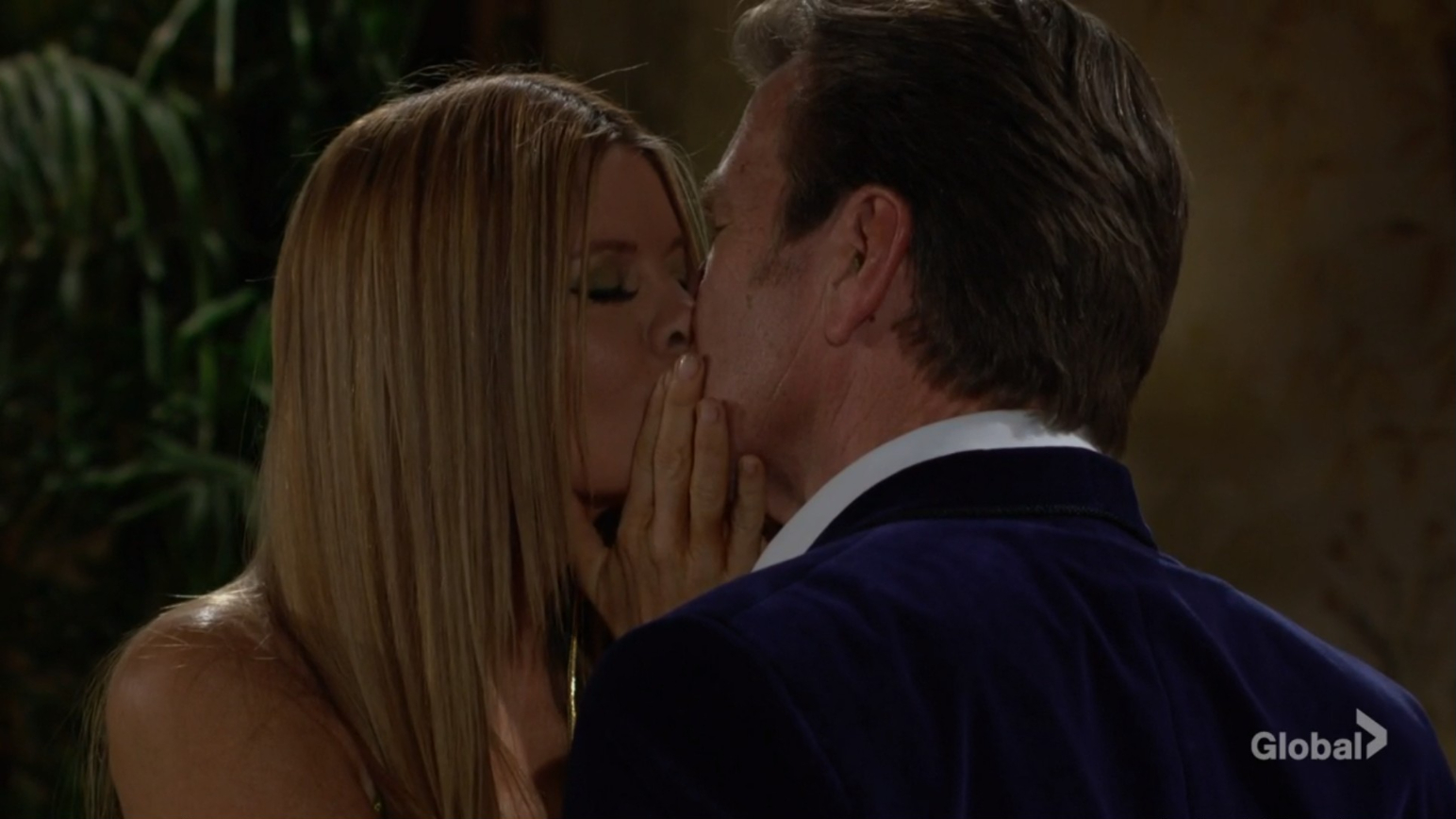 When she tells him she was her date tonight, he tells her he caught the bouquet. He thinks he’s already had his trip down the aisle. Phyllis doesn’t think so and kisses him.

Thursday’s Y&R recap: Romance is in the air for several couples, and Summer reveals something is going on at Marchetti and she has a way to help them out while moving home.