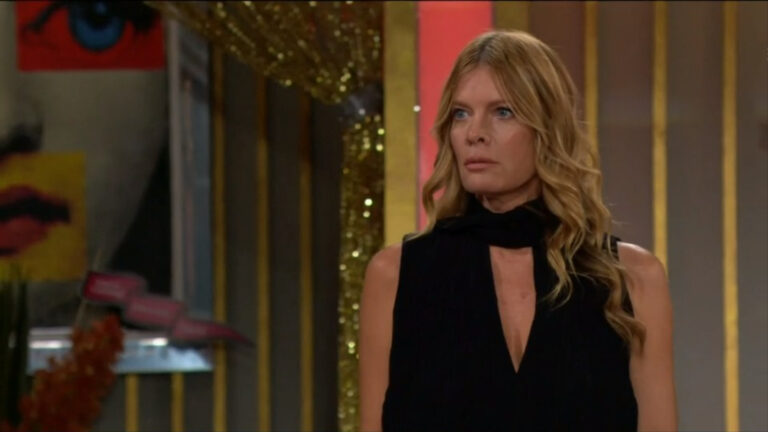 In this episode of CBS’ The Young and the Restless, Phyllis wonders how to get Summer on her side, Kyle tells his mom he’s proud of her, and Noah opens his new club. In the previous episode, Nikki’s meeting with Deacon was fruitful, Nate begged for his job back, and Diane threatened Phyllis.

At Jabot, Jack interrupts as Phyllis and Diane are having another confrontation in the hallway. He reminds them that if their kids had walked in on this instead of him, they’d be out of a job.

Diane apologizes and leaves sobbing. Phyllis claims she didn’t do anything. Jack tells her she’s not off the hook.

Jack follows Diane into the park, where she is weeping. “I really screwed up,” she says.

She explains she’s been stuffing down her feelings for so long and today she cracked.

She hates it when she lets people like Victor and Phyllis get to her. What makes it worse is she brought this on herself.

When she gets out the phone, she says Kyle deserves to know the truth.

Jack makes it clear he has no intention of telling their son what happened today. He’s not getting involved in issues at Marchetti.

She still wants her son to know.

Diane needs to be honest with him so he can decide how to deal with her.

They spot Kyle and Summer looking at pictures and seeming disappointed. Tessa starts panicking but her wife tells her no one will suspect a thing.

They walk over and Tessa asks if the shoot was a waste of time.

They assure her they were good. Her smile could sell a million dresses. Tessa thanks them for all their support.

Kyle and Summer explain they were actually looking at ideas for their vow renewal.

They haven’t found the right ideas yet.

As they chat, Noah wanders in and hides in the corner for a minute.

He wanders over and hears about the vow renewal.

Summer asks if he’ll bring Allie. He asks to speak to Tessa and her wife about that.

The three walk off.

Kyle and Summer are confused about what just happened and why Noah is turning to them for advice.

She announces something has happened.

Kyle gets a text from his mom.

Diane, Phyllis, Summer, and Kyle all meet in Jack’s office. Diane recaps how she lost her temper and apologizes.

Phyllis gets sarcastic and accuses her of giving a performance.

Diane offers to save her son any discomfort and resigns. Phyllis congratulates her on doing the noble thing. Summer and Kyle nod and remind her mom that she has to resign too.

Phyllis is appalled. Diane suppresses a smirk. Red insists she’s not at fault and Diane has lost her mind. Kyle admires his mom for being honest when she knew the cost.

Kyle is sorry to see them both go but this was inevitable. Thanking them for the opportunity, Phyllis walks out. Diane hopes they can all have dinner at some point and leaves.

Jack asks the kids if they were just teaching their moms a lesson. They don’t see a way out of this. He urges them to let their moms stew and then give them a final chance.

After he leaves, Summer says Jack is a pushover and they shouldn’t give their moms another chance.

This is the only way they will learn. They need to be firm.

He suggests they see if they are crafting apology letters or plotting a war.

At the Abbott estate, Traci is startled when she bumps into Allie.

She’s not used to having anyone at the house at that time of day.

Allie asks what she’s been working on and assures her everything is fine.

Traci is sure that doing an internship is exhausting but Allie insists it’s great.

She’s been keeping her head down and trying to do the best she can. That’s not easy with Diane and Phyllis around.

Sitting on the couch, Allie tells her that the troublesome pair have been giving her a wide berth.

She loves it in the lab, working with chemicals. Traci recalls how peaceful Ashley found it there.

Working in the place where her father found so much joy is more than Allie could have dreamed of.

Vaguely, she talks about how great it is to have family and thanks Traci for all her advice.

Mariah, Tess, and Noah arrive. They notice Traci is there and Noah asks her to stay, hoping her evening is free.

They have planned a surprise for Summer and Kyle and could use her help.

They want Traci to be the decoy to get them there.

They aren’t sure if they should invite Diane and Phyllis. Traci thinks they would have to be on their best behavior. Mariah doesn’t see the point in risking it.

Noah thinks it would be weird not to invite the moms. Allie suggests they stagger their appearances and make sure there is no overlap. They assume Diane should be the first to come since she’s easier to manage.

Summer tracks her mom down at Crimson Lights.

Phyllis reminds her she’s her daughter and should always be on her side. She sided with Diane after she lost her mind.

Summer reminds her they laid down a zero-tolerance policy.

She understands why she hates Diane, but she gave her word she would keep the peace. Her mom complains that this is ridiculous.

Summer doesn’t think she wanted to keep the peace.

She sympathizes, but they are trying to run a company and can’t deal with these problems.

After telling her mom they need to sleep on this, she says they will talk in the morning.

Left alone, Phyllis wonders how she can get her daughter to see things from her perspective.

Kyle finds his mom drinking at Society. He’s proud she made the right decision. She feels like she had no choice and only hopes this doesn’t change the way he sees her.

He says it was only business and can stay that way.

After losing her job, she is more resolved to be better. When she asks if Phyllis has resigned, he gets a text from Mariah asking him to bring his mom to the Phoenix.

Summer, Kyle, and Diane go to the Phoenix. When they enter the club, the lights are out.

They’re confused. Suddenly, the lights come on and the guests yell surprise.

They explain that this is a party to honor them.

Kyle and Summer thank them for this. He thinks they really know how to celebrate. Summer tells Noah the place will be packed day and night.

As the guests mingle, Noah explains to Summer that they decided to stagger the arrival of the mothers.

She thinks that was brilliant. He spots Phyllis sneaking in.

Looking around, Phyllis demands to know what’s going on.

Friday’s Y&R recap: Nate leaves Elena when she refuses to get on board with espionage