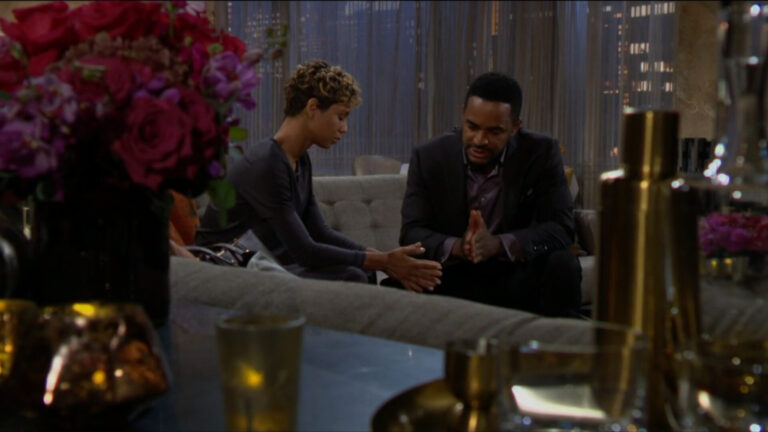 In this episode of CBS’ The Young and the Restless, Phyllis has a tough time enjoying the party, the family makes speeches about Summer and Kyle, and Victoria confronts Chelsea and Billy. In the previous episode, Phyllis and Diane were fired, and Nate begged for his job back.

At Noah’s club, he throws a party to honor Summer and Kyle. Nick asks Phyllis to forgive Noah when he asks.

She looks appalled but does so and then slumps on the 1970s sofa while Mariah asks who is ready to dance. Phyllis isn’t.

Nearby, Diane sips champagne and snarks about how Phyllis looks like she’s about to throw a tantrum.

Traci hopes they can all behave themselves today. Nick goes to Phyllis. He knows Diane’s the last person she wants to see.

She tears up and tells him she lost her job and blames Diane. Nick asks her to put it behind her for the night.

Phyllis makes a toast and tells the room she and Diane are capable of being in the same room.

She calls the club beautiful and the party. She’s certain it’ll be a big hit.

She struggles with tears and thanks them for including her at the party. She toasts to one of the best couples she knows. Everyone dances and she plasters a smile on her face as she gawks at Diane.

Mariah stops the dancing and appoints herself the best person so she could make a speech. Nick appoints himself King of the Dance Floor. They laugh.

Mariah thinks he’d rather have Harrison or Jack as a best man but she says she’s thrilled these two are renewing their vows as someone who recently married the love of her life.

She knows how important it is and raises a glass.

Everyone else does and Phyllis looks lost.

Noah has another chance at the brother of the bride speech.

Kyle’s lucky to have her.

They all drink to that with Diane smiling at Noah.

Later, Summer and Kyle give Diane and Phyllis back their jobs.

They get one more shot.

The woman are grateful and agree to be cool about it and do the best jobs they can.

Later, Diane tells Jack the good news. She gets a mysterious text from someone who says they can’t wait any longer.

They’re on the way to Genoa City.

She seems very concerned and when Jack questions her, she claims it was spam. She starts looking sicker by the minute and Phyllis n otices.

Elena arrives home to Nate pouring champagne and a pot of bolognese simmering.

She hopes he’s not trying to convince her to jump on board with his plan for corporate espionage.

Nate says he’s done a 180 with his family and he’s back on the job.

She purses her lips when he admits he’s still going ahead with his original idea.

He thinks it’ll unify his family, which makes no sense to Elena.

She thinks Devon and Lily will be blindsided. He knows they will.

He needs her on board. She wants to support him but is concerned.

He can’t risk losing her. They kiss. Later, Elena’s in a dressing gown.

She tells him she still can’t get on board with this move.

Nate tells her she’s as limited as Devon is on this. He takes off to get fresh air.

At Chancellor-Winters, Billy and Lily are grateful that Nate swallowed his pride and admitted he overstepped.

Devon is a little less enthusiastic and hopes to see a change.

Chelsea texts Billy to go for a drink.

Lily tells him to go ahead and afterward, she and Devon talk about Amanda’s father, who collapsed from exhaustion.

Devon wishes he could fly out to see her. He feels he’s neglecting her when his focus has been on Nate.

He wishes he could be excited about the IPO, but he’s not.

They both have similar concerns but Lily thinks they can ensure they maintain 51% of the shares. It’s the only way Devon would agree to this.

With a little chatter, Devon tells Lily he’s on board.

At the ranch, Victor tells Victoria that Nikki met with Deacon and learned a few new details about Diane’s life before she returned to Genoa City.

She turns the subject over to the company and exclaims that she wants Newman to become the majority shareholder of Chancellor-Winters.

Victor wasn’t expecting that. She fills him in on Nate’s frustration on the job and about the IPO.

He offered to be her inside man and to sell his shares if she puts him in control. Vicor calls insider trading risky. She shrugs.

When do they shy away from that?

He smiles and calls her tough. “Let’s do it.”

At Society, Billy meets Chelsea, who hopes she has changed her mind about the podcast.

She only wanted to thank him for letting her spend time with Johnny.

Billy liked watching them together.

Billy admits that he’s already had questions about who his biological mother is.

It’s an important decision for Victoria. Victoria turns up and isn’t surprised to see them together. She calls them sneaky for getting the boys together while she was away.

She feels backed into a corner. Chelsea apologizes and promises she’s not trying to do anything behind her back.

Victoria knows but the kids have been through a lot. She doesn’t see this as being a good time.

Chelsea worries about the emotional issues that could be caused down the road when he realizes who she is and that she never told him.

Victoria’s affected by Chelsea’s emotions. She asks if Chelsea can accept it if he isn’t willing to spend time with her.

Chelsea will need to explain things to Connor who also may have issues with it. Vicky asks her to delay the truth until Johnny knows.

Chelsea agrees to it and to let them do it in their own timeline.

At Crimson Lights, Audra Charles introduces herself to Nate. Jill brought her in to help take his company public.

Nate didn’t know the decision is done. She claims it’s not but Jill hopes it’ll happen by tomorrow.

Nate’s looking forward to a smooth IPO and wants to chat with her.

At home, Victor sits and stares at his chess board while he drinks.

Elena isn’t sure she can get in line with this version of Nate and tells him, “I think we need some time apart.”

Billy and Victoria talk in his office about Chelsea. Victoria can’t believe he didn’t see that Chelsea would do this to them, reminding him she’s a conwoman.

Diane arrives at her hotel suite and gasps. “How did you get in here?”