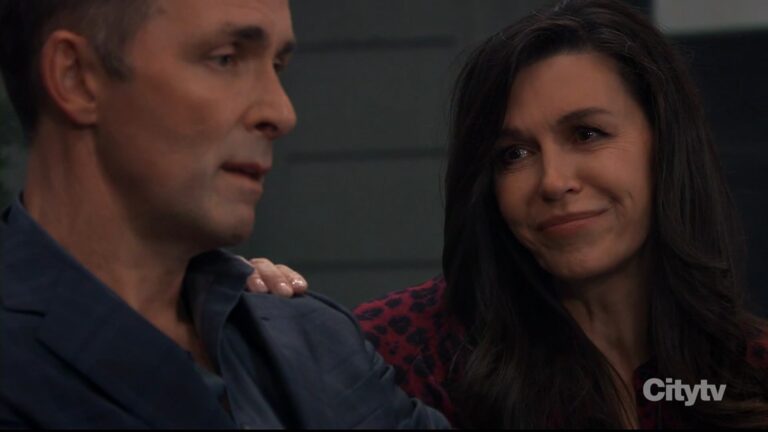 General Hospital recap for Wednesday, September 21, 2022. In today’s GH episode, Victor tries to lure Lucy away to lunch, Chase has an audition at The Savoy, and Sonny and Alexis worry about Kristina.

We also have Tuesday’s GH recap where Brando died, leaving GH doctors shocked and suspecting that something more sinister is at play.

Sonny corners Alexis on the street outside Kelly’s and shows her The Invader cover about Brando.

He reminds her that Sasha is already having a hard time with this.

They head inside to see their daughter and find her chuckling with Victor. This concerns them.

Valentin pulls Alexis away and leaves Sonny to deal with the situation.

Kristina tells her father that she was teaching her great uncle how to pronounce the word scone.

After she bustles off, Sonny warns Victor to stay away from his family.

The Cassadine reminds him that she’s his family too.

After he walks out, Valentin follows and tells him it would be a mistake to provoke Sonny.

Victor laughs that off.

His son reminds him he promised him a date to see Charlotte.

Victor says he’ll have to wait and bids him adieu.

Back inside, Kristina’s parents check on her. She says Victor offered to get her a guard but she thought that was an overreaction. Her mom doesn’t.

Kristina doesn’t even know what the attacker looked like and doubts they are after her.

Her parents want her to stay with one of them. She refuses and insists she’s not scared.

Alexis snaps that she’s risking her life for a dead-end job.

Kristina accuses her mom of being embarrassed by her.

Working there makes her happy and she doesn’t intend to stop.

At The Savoy, Brook Lynn and Chase wait backstage as Curtis introduces him.

Taking off his sunglasses, he tells her the crowd can wait but he can’t wait for her.

As he’s about to kiss her, she snaps out of it.

Maxie and Lucy demand to know what she has on her mind.

She avoids answering and drinks water.

Her colleagues remind her that Brando was attacked, and the company hasn’t made any statement about it yet.

They called her last night about this, but her phone was off.

They suggest she isn’t putting her heart into work. All her attention seems to be with Chase.

If she doesn’t put her attention back into Deception, Lucy threatens to fire her.

Maxie says they won’t fire her. Brook Lynn gets a text reminder that Chase has an audition and abruptly runs out.

Lucy gets back to suggesting they fire her.

Maxie reminds her of all the mistakes they’ve made for love.

Victor swans in and suggests that Lucy is ripe to make another one.

He asks when “Marvin” will be returning to chaperone her.

Maxie laughs at that, and Victor asks Coe if they can speak in private. Lucy tries to pretend they are having a business meeting, but Maxie doesn’t back her up. 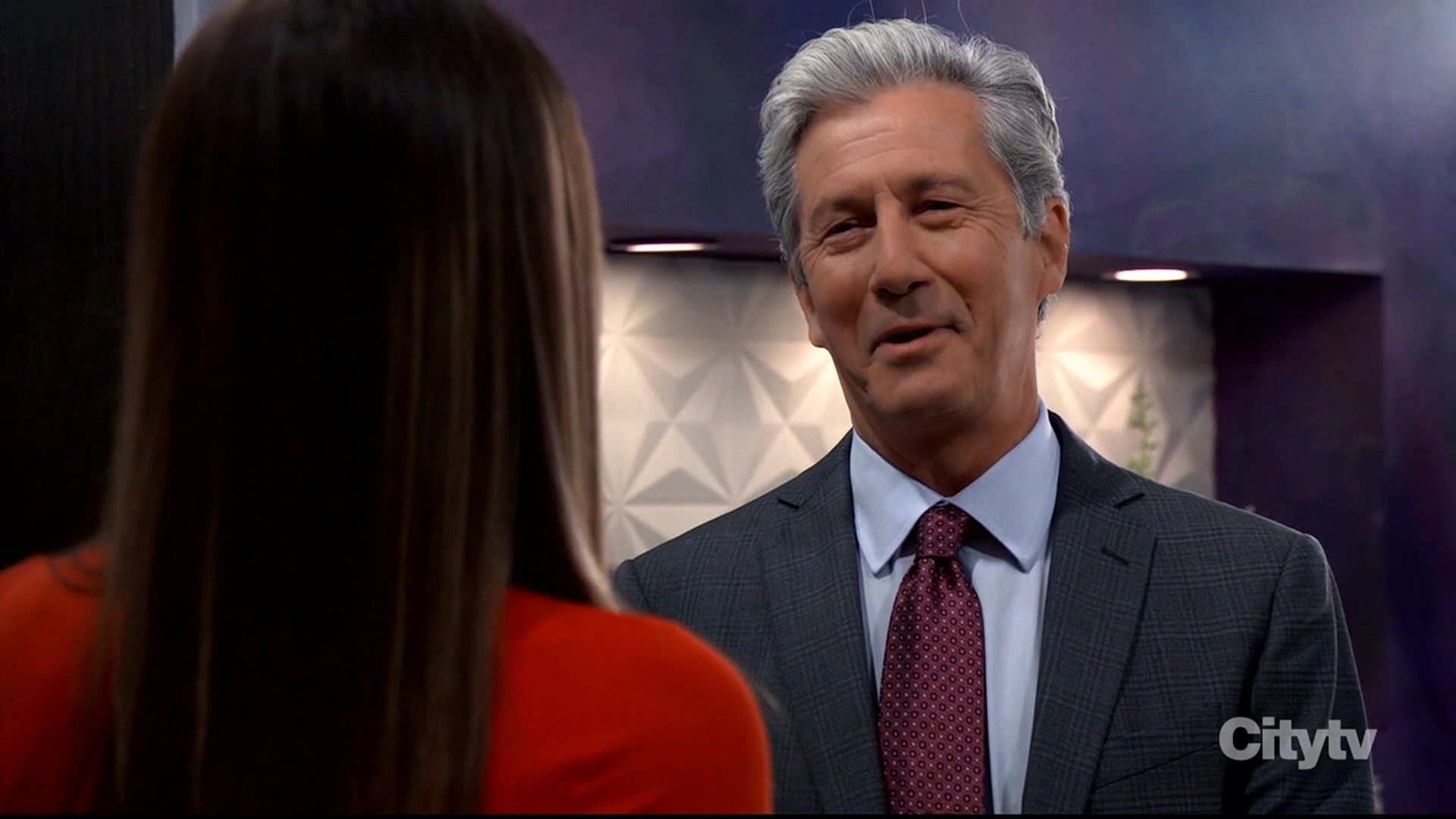 Left alone, they chat about the lunch he wants to take her to.

She points out that Sasha’s husband was just murdered, and this isn’t a great time.

He doesn’t understand and offers to keep her distracted, suggesting a “Cassadine infusion” could be in store for her.

Chase corners his brother at work and asks what happened to Brando. Finn doesn’t know.

The former detective wants to hunt down the person responsible for the attacks.

Finn reminds him that’s a job for the cops.

His brother points out that getting involved in an investigation unofficially will only make things worse.

The doctor encourages him to just be there for Sasha or at least channel his energy into a cause.

At The Savoy, Curtis calls Portia and tells her he spoke to Jordan and the divorce papers won’t be an issue. He’ll tell her all about it when he sees her.

When Curtis turns around, Selina tells him things are getting dangerous in Port Charles. He wonders why she’s there.

“I do have a reason, just not a good one,” she explains.

She wants him to apologize for not telling her about his engagement. When she offers him the chance to expand his role in her operation, he turns her down.

She asks him to let her honor his engagement.

Chase and Brook Lynn arrive for his audition.

Curtis didn’t know this was on the books. He agrees to listen to the “star on the rise.”

Brook Lynn knows Chase isn’t in the mood for this and offers to go and see Sasha with him.

He doesn’t think that would help and offers to do something useful for them.

Chase sings while the others listen.

After he finishes, they all clap.

Curtis says he has talent and a date at the club.

He offers to rent the place to Selina if she pays cash.

As Anna wanders by the pier, she tells Robert on the phone that things are more dangerous than she’d thought.

Someone with a hook is following her.

She startles Anna and explains she just picked the hook up at the shop.

It’s the same as the kind used on Ava and Brando.

The topic turns to the divorce issue. Jordan still loves him but she’s still keeping things from him. If she told him what she knows about Portia, it would destroy their lives.

She’s decided that the relationship is no longer her business.

Anna says that withholding information from him is unfair. Valentin interrupts.

Jordan warns him to keep careful with the Hook on the loose.

After she takes off, Valentin and Anna discuss Victor playing family man. She assures him they will bring Charlotte home.

Sitting down, he admits that the moment his daughter was born, she was in danger.

There have always been people willing to use her as leverage and his own father has ended up being more dangerous than anyone.

Anna tells him they need to be brave.

She explains that that she had Robert’s people doing surveillance on Charlotte but they were scared off by Victor. She’s started to think they need to cut Lucy out of this before she’s in danger.

Back at the hospital, Finn finds Portia. She’s been working all night. With everything going on, she’d rather focus on work.

He should have made a full recovery. If the last tests don’t help, maybe The Invader will. She wonders which member of the staff spoke to them about the attacks.

She says national media has been sniffing around all morning.

Jordan sticks her nose in and asks them if either of them knows the identity of this “civic-minded individual” who has gotten in the middle of an investigation.

She’s there to lay down the law about leaking information to the papers.

They could have already caused serious damage.

She reminds them the last time this happened, Alexis nearly killed Dante.

The results of Brando’s tests arrive.

It turns out the weapon was poisoned.