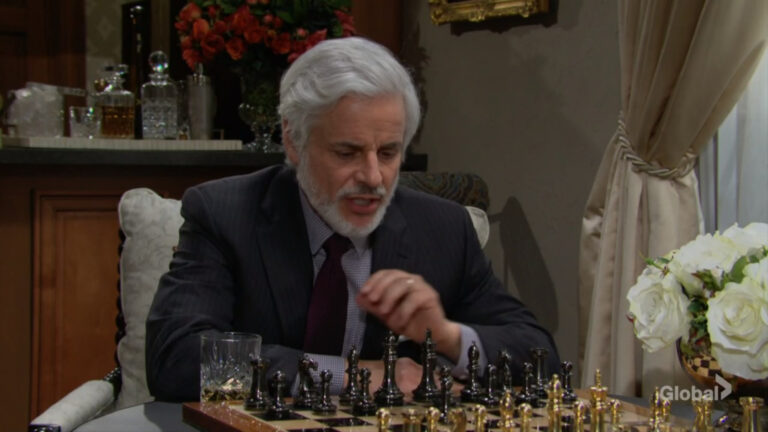 Canadian Y&R day ahead recap for Wednesday, February 2, 2022 episode, which airs in the USA Thursday, February 3. (Recaps live by 5:45 PM EST daily.) In the previous episode, Abby struggled to sign custody over to Devon and Noah confronted Tessa. In this episode of CBS’ The Young and the Restless,  Chloe and Chelsea make their pitch to Lauren, Victor’s suspicions raise alarms for Victoria, and Sally gets a job offer.

Chelsea and Chloe are packing up at the penthouse. Growing up, Chelsea never thought she would be able to live in a place like this. Now she’s saying goodbye to it and feels like a failure. Her friend insists that she is resilient and is reinventing herself for the future. “You mean the future without Adam?” Chelsea says.

Chloe tells her that taking care of herself makes her a “badass” and her life will become much better. She will always be there to love and support her. Chelsea flashes back to asking her to be Connor’s godmother and tells her she’s always been a rock. Chloe feels like things are about to turn around for them today.

Sally bumps into Adam at Crimson Lights and sarcastically talks about her “early retirement.” She admits she’s freaked out about her future and vents about everything that’s happened since she arrived in Genoa City.

She’s a genius but out of a job. He asks her to Society to grab a drink. She says she would love that.

At the ranch, Victoria tells her parents that Ashland can’t be there because he has a meeting with his doctor about his cancer treatment. Her father wonders if there’s more to him not being there. She assures him her husband isn’t hiding anything.

Victor keeps wondering why he went to Peru to have an obscure treatment when he could have gone to the best institutions in their country. Victoria asks what he’s trying to say. Victor says he just wants to know how things will look going forward. His daughter says Ashland will be involved as much as his health will allow.

Ashland meets with Nate at Society to discuss the trend in his test results. Nate admits that he had grave doubts about his treatment but the results speak for themselves. Locke says that the universe cut him a break.

He knows he’s not out of the woods yet but is pleased he’s come so far. The doctor is just glad his skepticism has been proven wrong.

Ashland reminds him of the offer he gave. Nate can’t help thinking he’s trying to bring him aboard because they are friends. Locke says he trusts his gut and is sure Nate has all the tools that he needs. The doctor is flattered but not ready to turn his back on medicine, even if his career hasn’t turned out as planned. They toast.

At the next table, Lauren complains about the supply chain to Michael as he stares past her to watch Nate and Ashland talk. She pauses and asks him what’s going on with Nate and Ashland. The lawyer explains that there are some issues with how the clinic Locke’s been attending has been funded. Victor has had him dig into their curious accounting. This is confusing to her.

Michael claims Victor is constantly playing three-dimensional chess and is several moves ahead. He’s just being cautious, which probably isn’t a bad thing given Locke’s reputation. It is one thing to make allowances for a man about to die, but not one who will go on living.

Chelsea and Chloe pop up so Michael takes off. The two ladies tell Lauren about their plans for the future. Chelsea knows she was ‘abominable’ the last time she worked for Lauren, but she insists she’s a new person and is determined to share success with her. As long as it doesn’t involve Sally, Lauren is willing to listen to their proposal. 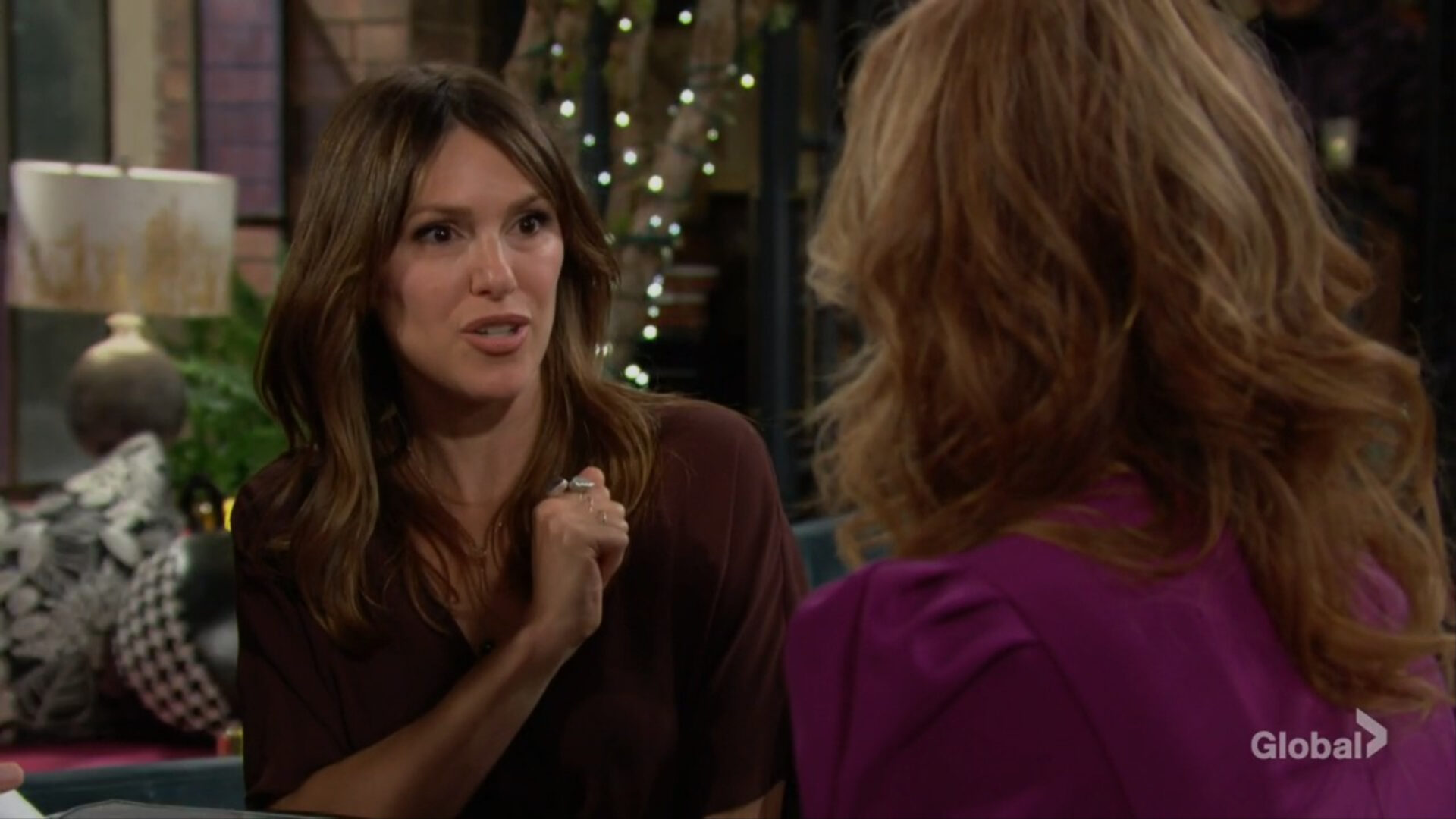 Sally shows up and tells the table they are all women she’s been proud to work with. Chloe thanks her, but Chelsea and Lauren snub her and assume she’ll have a hard time getting a job again. Adam strolls in and announces that Sally will be fine because she is coming to work with him at Newman Media. He holds her hand and shows her to the bar before he goes to take a quick call.

Michael receives a call outside and then goes back in, finding Nate alone. He asks him about Ashland’s experimental treatment. The doctor says the evidence is “almost too good to be true.”

He gets called off to work. Adam spots Michael alone and asks what his father has him digging into now. The lawyer is evasive.

Adam returns to Sally at the bar. She thanks him for saving her earlier. He admits he’s actually been considering offering her a job. Adam admires her drive and Victoria likes her.

Adam’s not sure what her title would be, but a job is hers if she wants it. She clutches at his hand and exclaims that she does.

Back at their table, Chelsea and Chloe make their pitch to Lauren. Chloe does most of the talking because Chelsea can barely keep her eyes off Adam and Sally and stammers. Lauren likes what they say so suggests they put together a business plan and can meet later in the week. 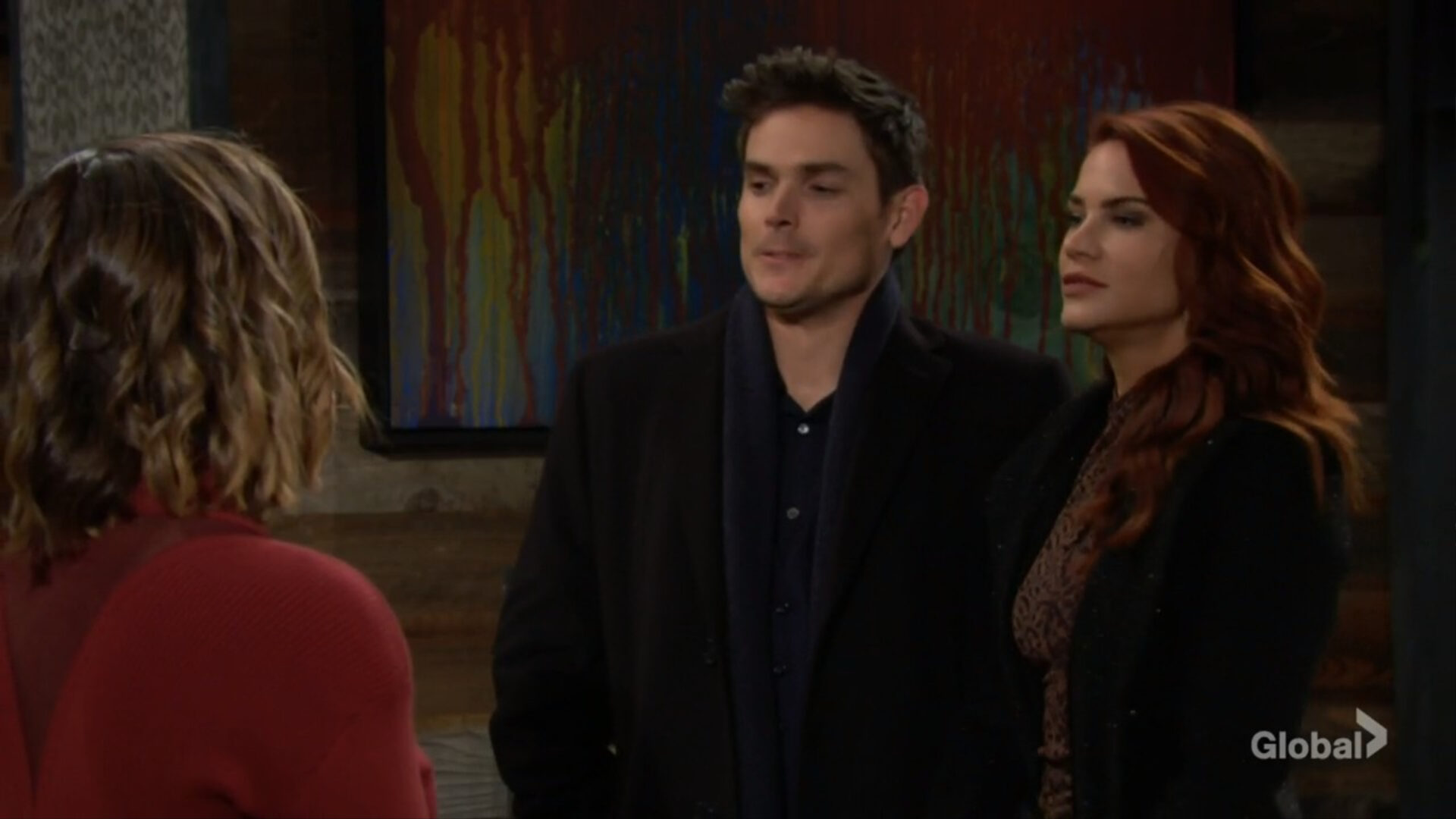 Once Lauren leaves, Chelsea apologizes for being so distracted. Her friend knows it is an emotional day today. They can’t let Sally distract them. Chelsea vents about Adam playing games.

Chloe says they are on to better things so they bustle off to work. Before they can exit, Sally wishes them good luck with Lauren. Adam helps her put her coat on so they can leave to discuss her new job. They gloat while Chelsea has to control herself. 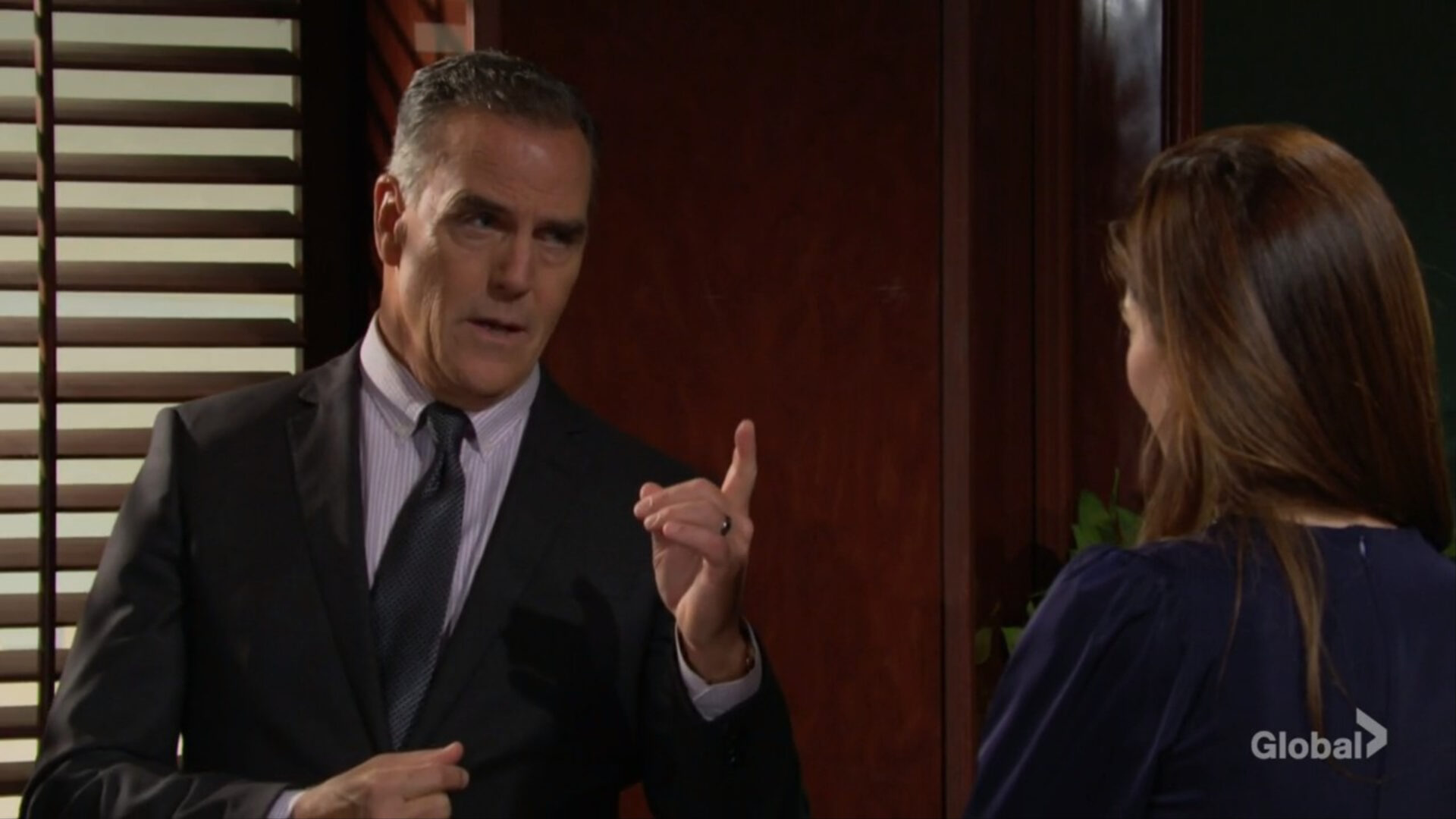 Ashland stops by Victoria’s office at Newman. He says his cancer is still in check. She throws her arms around him and he tells her how lucky he is. Victoria informs him of how curious his father was about his absence earlier. It baffles Ashland that Victor rarely wants him around and yet is so concerned when he’s not. She explains her father had questions about his treatment.

Her husband has no idea what things will look like going forward. All he has is today. Victoria suspects her father is trying to shake her up a bit. Victor likely wants him to regard Locke as a threat to the Newman empire. He wishes her father would stop working so hard to unsettle her.

She likes how calm he is in the middle of all this meddling. He’s used to it. Victor expects unconditional loyalty but reserves the right to constantly change his. He’s realized they are more formidable as a team. Victor is going to have to contend with him being a full partner.

Sally and Adam go to his office. She tells him how smart he was to snap her up. Hugging him, she thanks him for the chance. Things get close. 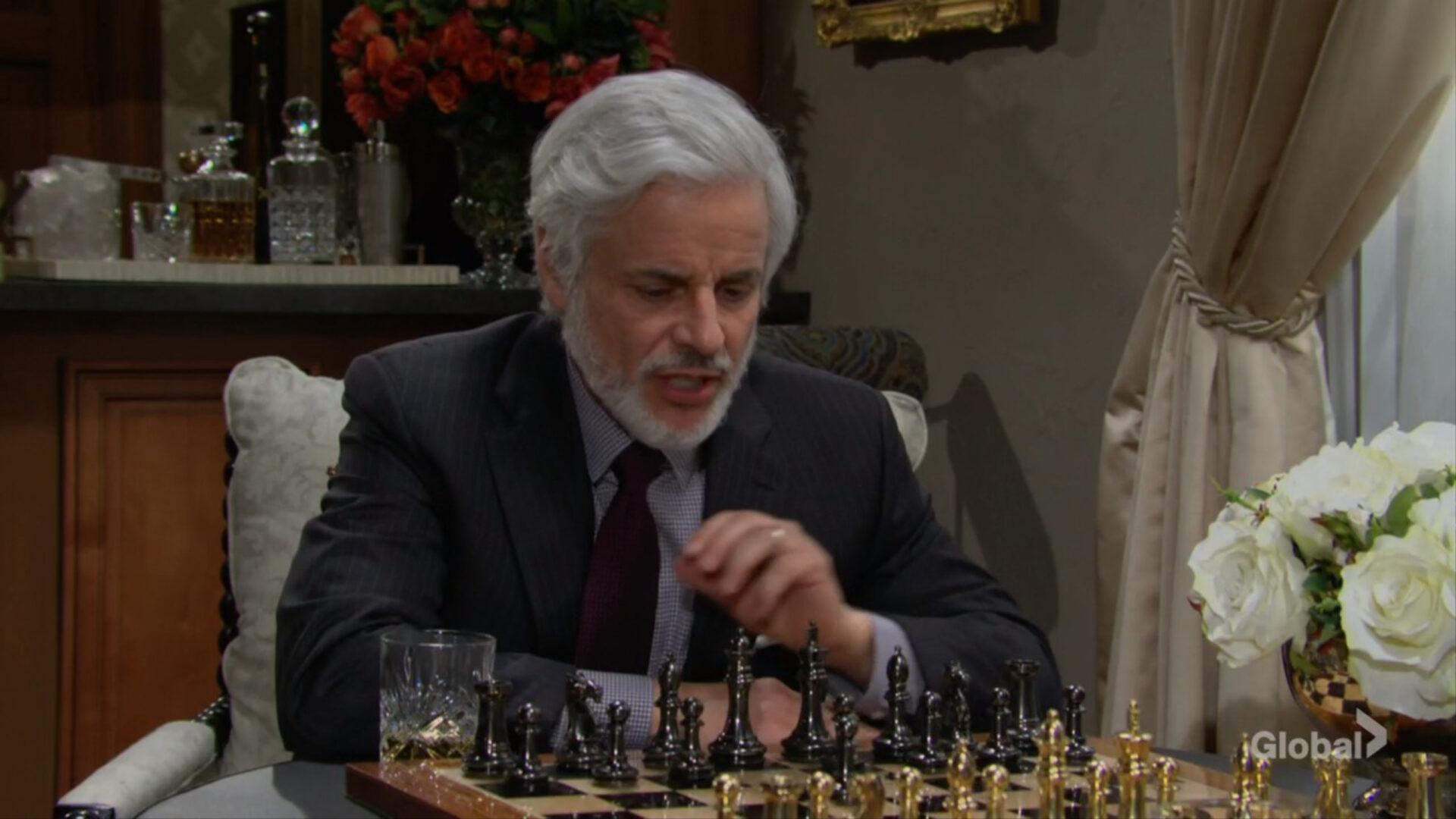 At the ranch, Michael and Victor play chess as they discuss the confusing friendship of Ashland and Nate. Michael knows a serious illness can change a person, but that friendship seems more to be about “decency by association.” He mentions Nate saying the treatment seemed almost too good to be true. 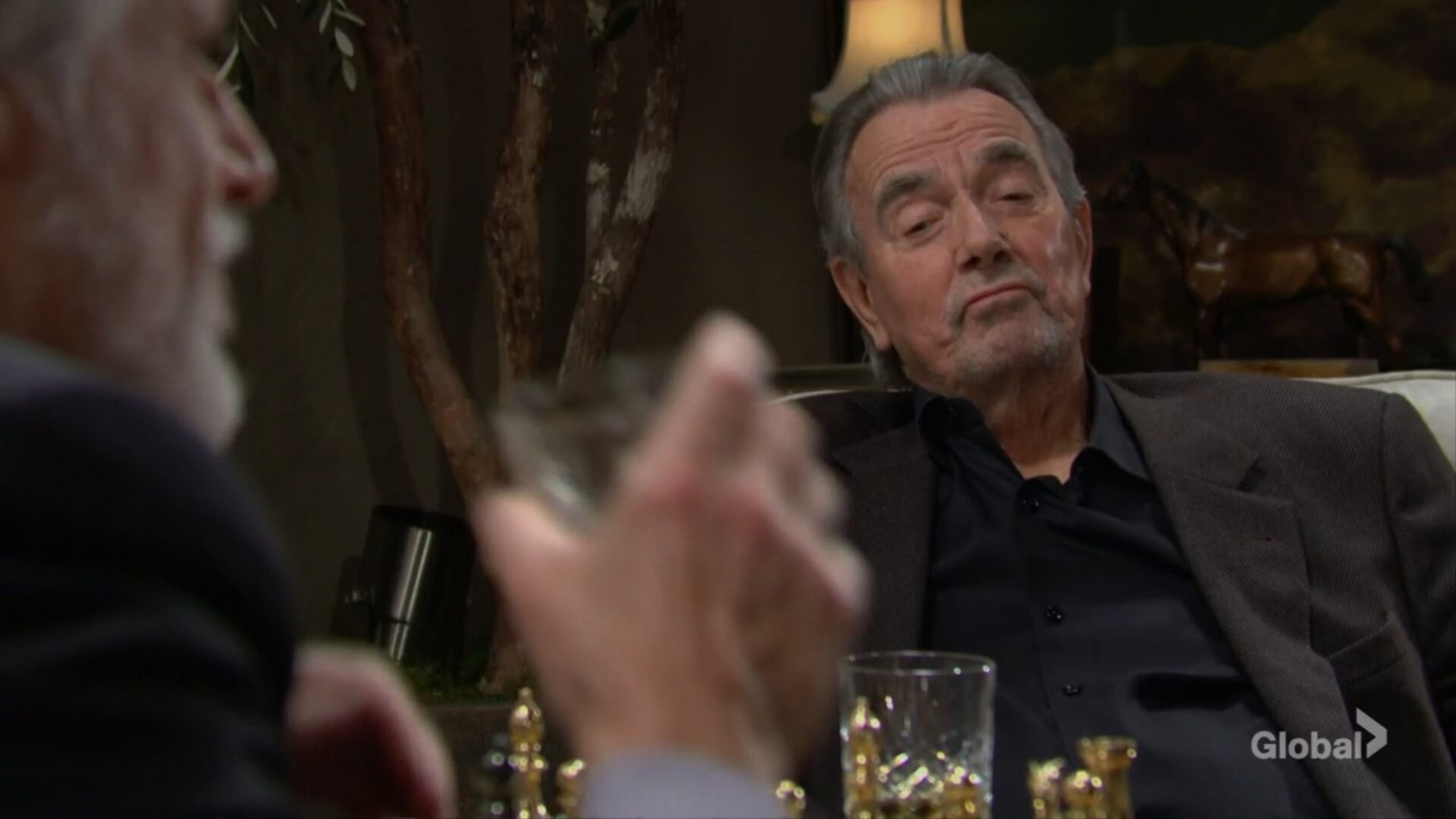 Victor doesn’t know what Ashland’s motives are but something doesn’t smell right. Michael explains that Locke has been concealing the fact that he’s funding the clinic that treated him.

The Newman urges him to keep digging and head to Peru to get more information. The lawyer drinks as he thinks about how much his wife won’t like him taking off to South America, but agrees to do it. He’s keen to find out what’s really happening.

Coming up Friday on Y&R!

Dominic falls sick, and Tessa and Mariah have their engagement party.