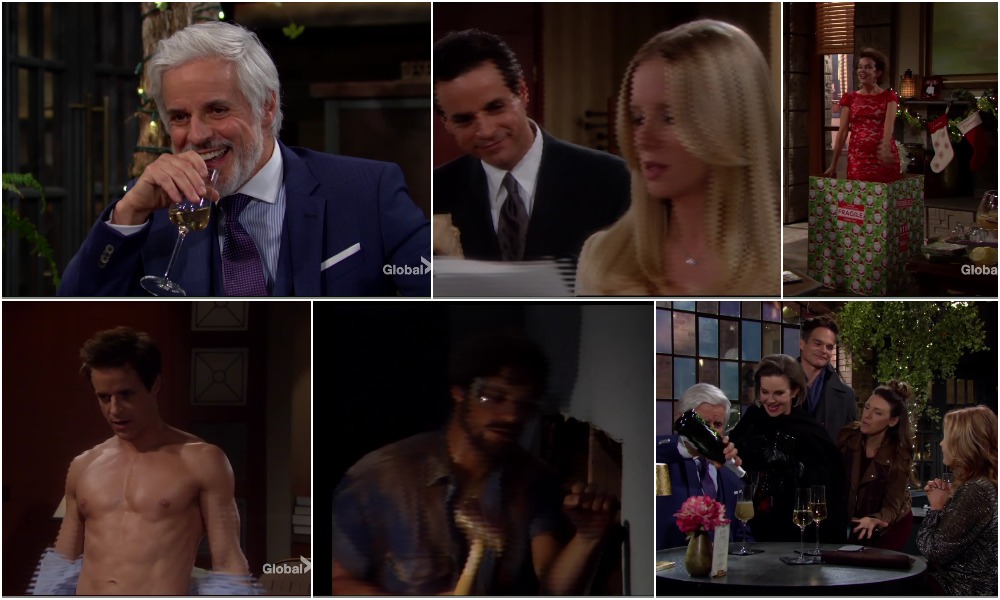 Canadian Y&R day ahead recap for Friday, January 7, 2021 episode, which airs in the USA Monday, January 10. (Recaps live by 5:45 PM EST daily.) In the previous episode, Phyllis dealt with a lawsuit. In this episode of CBS’ The Young and the Restless,  Michael considers retiring during this standalone episode which includes flashbacks from the past and finally makes a decision. The actor is not leaving Y&R. This is his 30th year with the show!

At Society, Lauren congratulates Michael on winning another case. She gets Andy to bring champagne. He’s on a heck of a winning streak. He’s the best prosecutor out there and at the pinnacle of his career. Michael says it’s funny she should say that.

He’s wondering if he should quit while he’s ahead. She asks what he’d do. He’d research that mystery novel he wanted to write. She’s not sure if he’s being serious.

Maybe he needs a break. He tells her it isn’t like that. It’s about taking his life in a different direction. He felt content and wonders if that’s how people feel when they’re ready to retire. Christine walks over. “Retire?”

She’s sorry to interrupt but couldn’t help but overhear. Since her to go order isn’t ready, she sits and tells him it’d be the end of an era in this town if he retired. She seems wistful.

Michael knows that nobody understands that as well as her. He gave her her first job. He flashes back to her first day and how excited and nervous she was. He welcomed her to Whitman, Walker and Wilson.

They laugh and Christine tells him he’s come a long way since then. She learned a lot from him and calls his mind brilliant. He reminds her she met the egomaniac then as well. He recalls his power plays and mind games.

He admits to Christine that he underestimated her. “A little,” she says. He isn’t smiling as he talks about crossing the line and she took him to court and exposed his abhorrent behavior.

He was consumed with revenge. He flashes to trying to get through the wall from his apartment to Christine’s and talks about how obsessed, violent and furious he was.

Winding up in prison was one of the best things that happened to him, Michael states. He had an epiphany. Christine recalls doubting it at first. He flashes back to asking Christine to go on the stand for him. She didn’t believe he had changed at all. He begged her to believe him.

He tells her he has been thankful ever since that she did. “You restored my career.” Christine smiles. She flashes to them working as partners in Baldwin Williams Associates. Lauren asks Christine her thoughts. Should Michael retire?

She’s not sure. Only he will know. “Hey, you could do stand up.” Michael pooh pooh’s that idea. Lauren reminds him he was sketching a cottage in the woods that was good. “I wouldn’t go that far,” he says. She thinks he could be an artist.

Victor comes into Society and hears the conversation. He hugs Christine who leaves since her order is ready. Andy hands her order over and Victor takes her seat. Andy gets Victor some bubbly and they fill him in on his big win.

Michael’s talking of retirement. “What are you talking about?” Victor says, surprised. He’s sure his lawyer would be bored out of his skull. Michael thinks he could play with his niece and nephew, and visit Fenmore. Victor asks him to join Newman Media.

They need his expertise and talent. Michael recalls them working together before and how Michael screwed something up. Victor had told him it’d cost him millions of dollars and screamed, “And I don’t like to lose!” He fired Michael. Victor knows their working relationship was tumultuous. Michael calls the offer flattering. Victor says he can set his own hours.

“Will you put that in writing?” He will. He’ll also compensate him well. They flashback again with Victor refusing to let Michael take the rap for him for something. Victor takes off and Lauren reveals when he was talking to Victor, she texted the family to come. 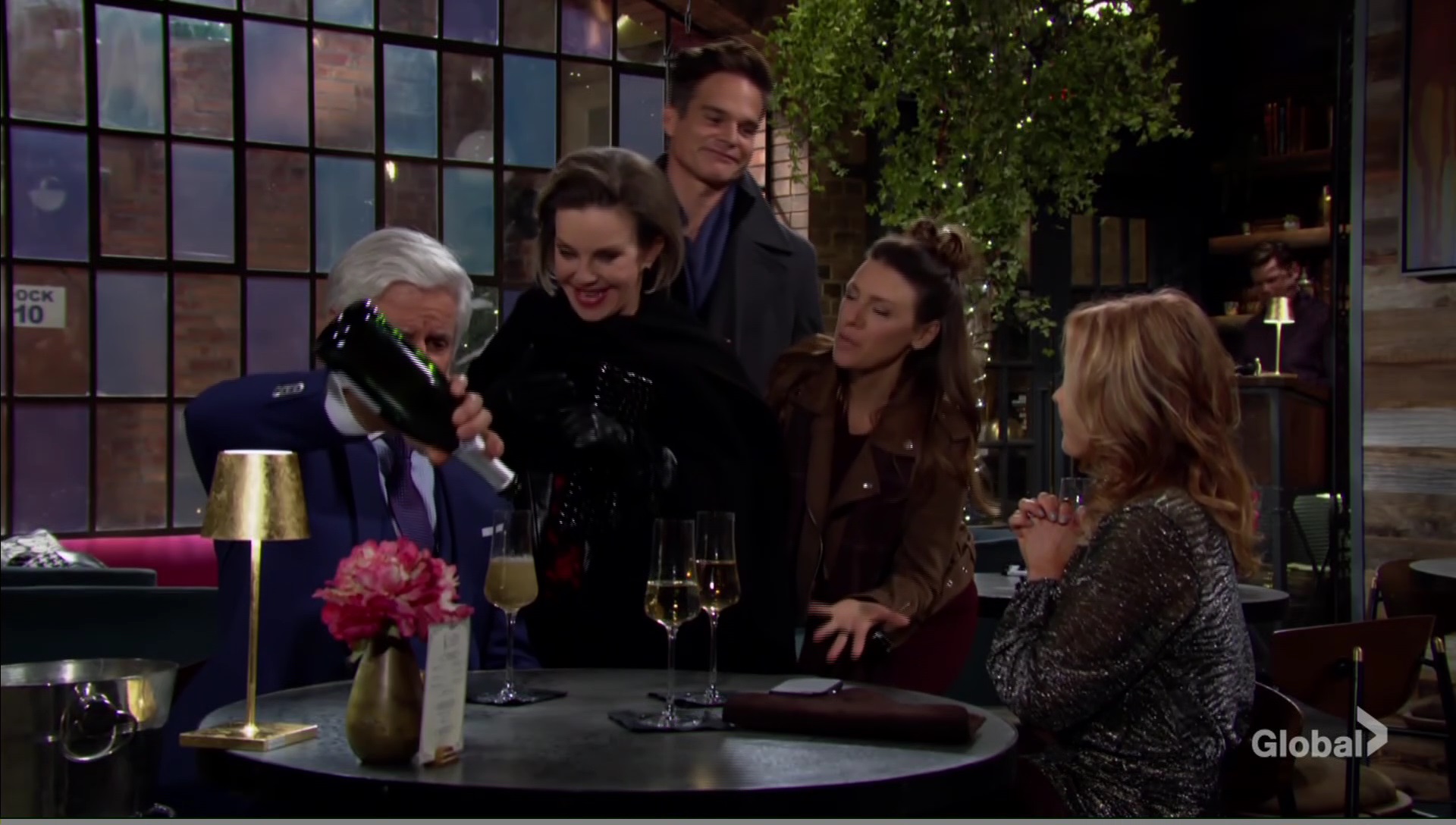 They arrive and Michael gruffly talks about his crazy family and takes a drink of bubbly. Gloria, Kevin and Chloe all laugh at him. Lauren says Phyllis is tied up at work. Michael thinks she’d be the one on his side. Gloria says they all came together to offer insight. Kevin adds, “Like a regular family. Not like they used to be.” Gloria tears up, thinking of the past.

She doesn’t want to go there. Michael flashes to Gloria asking Michael what he wanted from her. He wondered when she’d tell her husband who her children were. Glo says it took her a while but she’s grown into her role. “As Lady Macbeth?” Kevin asks. Michael almost chokes as he laughs. They flashback to Glo popping out of a Christmas present for them.

He talks about how he wasn’t a good brother always. He flashes to Kevin in the hospital, bloodied and flashes again to Kevin a while back as they talked about how happy Kevin was to stand up for him on the most important day of his life.

Lauren tells them Michael’s at a crossroads. Should he retire? Kevin says not to while Chloe tells him to get out while he can. Chloe thinks he deserves to kick back and relax. Kevin laughs and dreads the idea with Michael with too much time on his hands.

Glo thinks he’ll get on everyone’s nerves. She thinks she’s much too young to be the mother of a retiree. She thinks he should get another job. Kevin agrees. The family gives hugs and kisses and leaves to let Michael contemplate.

Michael really only wants Lauren’s opinion. He reminds her of their first kiss and they flashback to that and then their wedding and then Michael recalls when she became pregnant with Fen. He was frightened but she reminded him he wasn’t the man he used to be.

They discuss the challenges that they faced and Lauren glumly recalls almost ruining their life together. Michael kisses her hands. He tells her they were meant to be. They flash to Fen and his own journey and how he thanked them for saving his life.

Lauren thinks he should choose the path that makes him the happiest. Michael admits he made up his mind. “It’s clear that I need to retire because having more time to spend with you will make me the happiest.” Lauren tears up.

A sexy song comes on and they dance and reminisce about some of their sexier times, their love and laughter.

Big news this weekend is that Richard Burgi announced his departure from Y&R.