Home » Young and Restless » Y&R Recaps » Devon’s Nightmare Makes Him Wonder if He’s Being Selfish To Want To Be With Dominic, While Nick Celebrates His Birthday

Devon’s Nightmare Makes Him Wonder if He’s Being Selfish To Want To Be With Dominic, While Nick Celebrates His Birthday 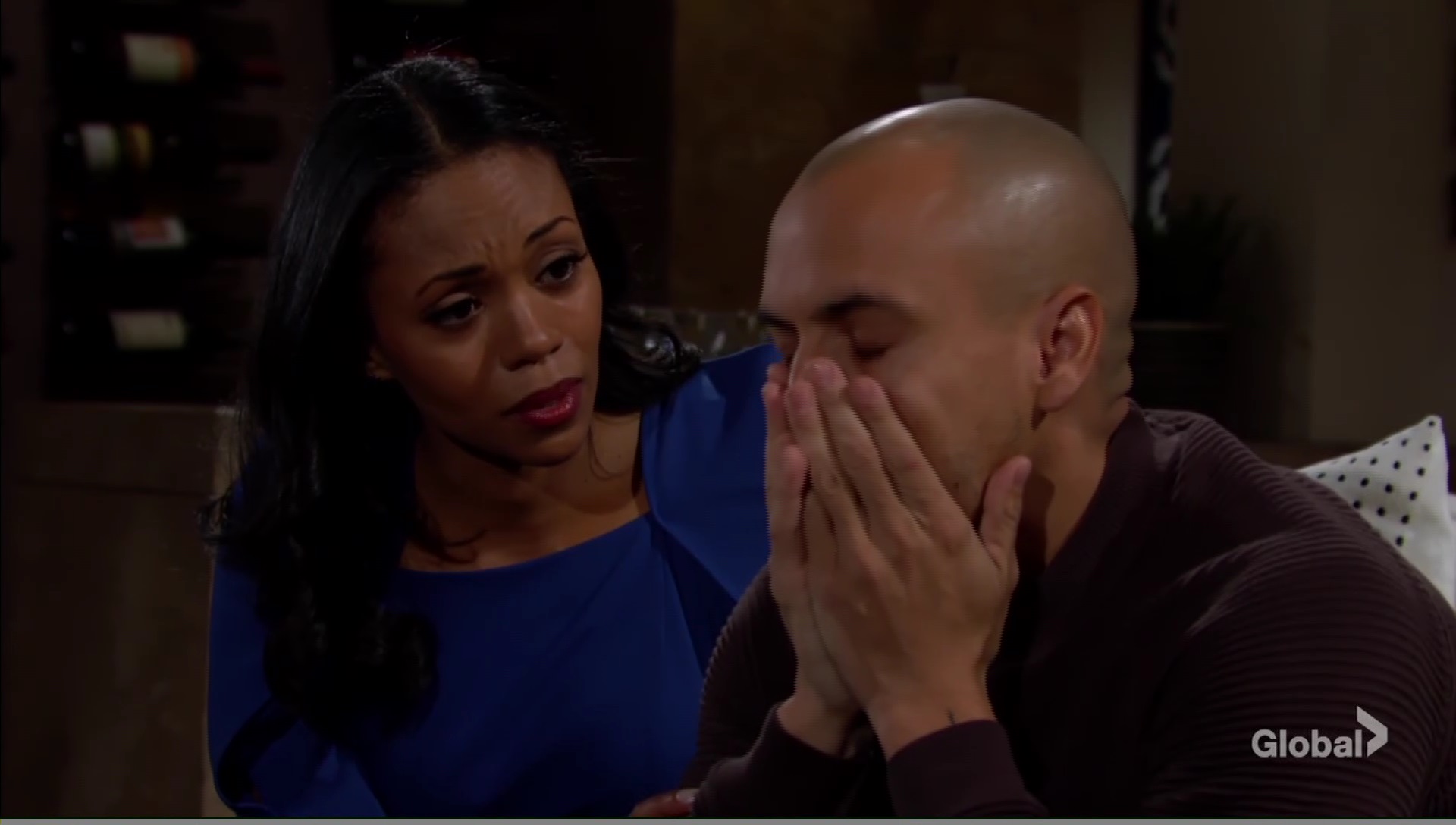 Canadian Y&R day ahead recap for Monday, January 10, 2021 episode, which airs in the USA Tuesday, January 11. (Recaps live by 5:45 PM EST daily.) In the previous episode, Christian Leblanc celebrated 30 years on Y&R with a special standalone episode. In this episode of CBS’ The Young and the Restless, Nick celebrates getting a year older, and Chance feels bad about his lack of fatherly skills, while Devon feels selfish.

Nick is surprised to see his family pop out yelling, “Surprise!” at Crimson Lights. Sharon, Faith, Mariah, Tessa, Moses, and Noah wish him a happy birthday. Nick grins and says, “I suddenly remember I have a root canal to get to.” They collectively laugh and give him a crown and a party horn.

He blows it, looking less than enthused. He calls Nanny Monique to tell them he’ll be late because of the surprise party. Nick’s glad Christian will be sleeping through this one. Sharon tells him all they heard about was how great Dad was.

Nick worries to Moses and Tessa that his kids are about to roast him. Tessa tells him he should be afraid. “Very afraid,” Moses agrees. They banter and talk about the Newman Death Glare. Nick glares at her and she thinks it’s like he’s looking through her. Sharon recalls Nick chasing someone down for stealing Noah’s Halloween candy. Faith says he goes overboard sometimes but he does it to look out for them.

They embrace. Mariah wants to dive into Nick’s love life. He says he doesn’t have one right now. Mariah knows it’ll change since he’s a hopeless romantic. She knows she was a cynic and Noah’s had issues. She talks about him accepting her and Cassie into his life. They hug.

Noah gets up. He’s glad he can be in town to watch his dad get old. Everyone groans and Nick says, “Careful!” He likes that his dad always cheered him on at his games, art installations. He knows he did this for Summer. Faith chips in. He started listening to Tigirlily when she began to like them.

Nick asks Noah if he’s going to accept his job offer. Sharon is happily surprised and asks if her ex wants to hire Noah. She takes him aside and Nick explains he thinks this job will give him a chance to heal. He hasn’t answered yet. Whether he takes his job or keeps the one from Adam, he just hopes it keeps their son in GC.

Nearby, Noah asks Tessa about what’s going on with the adoption front. She says nothing, yet. She thanks  him for his interest and is grateful to have her friend close by.

Soon, Mariah takes out the cake and candles and Moses and Faith bring bottles of wine. They sing Happy Birthday to him. They comment on how there are a lot of candles. “Is it getting hot in here?” Faith jokes. “Let’s lay off the old guy,” Sharon jokes. “You too?” Nick says. “Traitor!” He blows out his candles. They clap and he asks for presents. He gets courtside tickets to The Bucks from Mariah and Tessa who pulled strings. “Top that!”

She found it in a vintage shop and thinks it might be his old shirt. He’ll wear it tomorrow. As they continue to joke about how old he is, Nick does the Newman Death Stare to Moses.

They break into laughter and play the record and dance. Later, Mariah reads from the Dad Jokes book. “Why do fathers stake an extra pair of socks when they go golfing?” She looks around and says, “In case they get a hole in one.”

Tessa thinks the book might have been a bad idea.

Mariah reads another. “What do you call a fish wearing a bow tie?” She waits for a few beats. “Sofishtocated.”

They laugh and Nick and Noah discuss the job again. Faith and Mariah talk about babies and it slips out that she and Tessa are looking to have a child. She’s sorry. She meant them to keep it secret today since it’s Nick’s birthday.

Nick’s thrilled to hear. Everyone except for Noah smiles and laughs talks about how excited they are to hear the news. Noah just listens. Everyone breaks apart and the kids leave.

Nick talks about how Summer is loving being a step-mom. Noah again watches without smiling as the women talk about adopting. “You look a little tired,” Sharon comments to her son. He claims he’s worn out from the dancing. She watches him stare at Tessa and Mariah before he goes.

Nick helps clean up. He and his ex talk about never being done parenting. She asks if Noah accepted the job yet. He still hasn’t. She is still worried. She thinks Nick seems at peace. He agrees. “My family is my touchstone.” He thanks her for the party.

At the penthouse, Devon isn’t into watching the movie so Amanda turns it off. She asks what’s wrong. He admits his mind is elsewhere. He’s got work on his mind and has to get it together. He can’t let the company he built with Neil fall apart.

Amanda understands. She also assumes he has Dominic on his mind. Later, Amanda’s upstairs when Devon puts on a record. He hears a baby cry and asks Amanda  if she hears that. He looks around. “Is that Dominic? Dom!” He yells. He opens the front door and sees nothing. “Daddy’s got ya,” he says.

Amanda shakes him awake to tell him he was having a dream. “It was awful,” Devon admits, breathing heavily. He couldn’t find Dom and he wasn’t there for him. Amanda thinks this is about him when he was little and couldn’t count on his son. Devon says no. That isn’t it. She knows better and says that was her. They vowed they’d be better parents. “Well, I don’t have a child, according to the world,” he says.

She knows he loves that baby and wants to protect him. “What if he’s not mine to protect and that’s why I couldn’t find him in my dream, because I’m not meant to.” He’s not sure if it’s selfish to want to be with Dominic for the rest of his life. Amanda says it isn’t.

At the manse, Abby watches happily as she watches Chance read to the baby on the monitor. He comes down the stairs and she’s smiling. She comments about how adorable it was to watch him read to their son. He gives a forced smile and says he guesses it’s good that he had backup.

Abby backtracks. That’s not why she was watching! Chance takes off for a drink and when he returns, Abby tells him she wasn’t checking up on him. She reassures him that he loves and cares for their son.

He wonders if it’s enough. She knows that feeling — she couldn’t carry their son, couldn’t keep him and Mariah from being kidnapped and couldn’t nurse him. It’s his turn to reassure her. She offers a bubble bath for two and he asks for a rain check.

Later, Chance stares out the window and hears something being blown up. He hears a baby cry and then looks at the monitor. Abby can be heard cooing to the baby. She apologizes. She was in the shower and Daddy must have fallen asleep. Chance shakes his head at himself. Abby returns later and they snuggle.

Tomorrow’s Y&R day ahead recap – Devon worries Billy’s a liability for Lily, while Sally is sent to New York to take off the strain between her and Chelsea…but there’s a hitch. Chelsea invites Adam.