Home » Young and Restless » Y&R Recaps » Lily Blows up at Billy for Making Her Fend Off Vultures on Her Own, Jack Blasts Billy For Gambling & Abby Charters a Jet to Spain

Lily Blows up at Billy for Making Her Fend Off Vultures on Her Own, Jack Blasts Billy For Gambling & Abby Charters a Jet to Spain 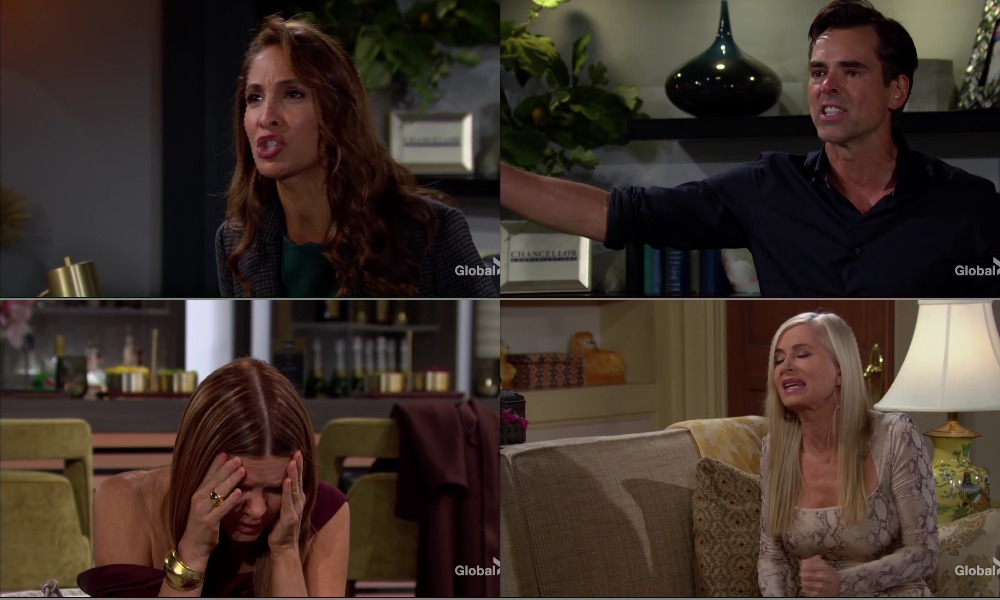 Soaps Spoilers has the Canadian Y&R day ahead recap for Thursday, November 18, 2021 episode, which airs in the USA Friday, November 19. (Recaps live by 5:45 PM EST daily.) In the previous episode, Abby learns Chance is alive. In this episode of CBS’ The Young and the Restless, Ashley learns that Abby got in touch with Devon, Phyllis thinks she may have feelings for Jack, and Ashley’s off to Spain.

Devon takes Dominic home and Ashley fawns all over him. He tells her that he heard from Abby and gives her the note to read. Devon defends Abby, knowing she’s thinking with her heart. He did the exact same thing when he heard Hilary was dead. Ashley finds it too risky.

At the hotel, Abby tells someone that if she charters this jet, they can tell nobody about it, especially Victor Newman. “Whatever your silence costs, I’m willing to pay.” She’s headed to Spain. “One passenger heading there, and two coming back.”

At Grand Phoenix, Phylis thinks about drunken Jack telling her she’s the most captivating woman he has ever known. Jack watches Phyllis work and scares her when he says hello. He asks how she is. She insists she’s fine. He’s her friend, he can check on her, she tells him. She asks if he saw the ChanceComm article on Locke and that Gaines guy retracting his story?

Jack gets a call. His meeting has been canceled. He tells Phyllis that their relationship has been strained because he confessed his feelings to her, now that she’s not with Nick. He assumes that it’ll change and things won’t be awkward at some point. She’s about to say something when he takes off.

Lauren arrives and scares the heck out of Phyllis. She’s treating her buyer who is coming to town and asks for Phyllis’ help in treating her. Phyllis gets thoughtful. “It’s hard to know what any of us like,” she says. Lauren asks if she’s having second thoughts about Nick. She denies that. It’s over. Being single has her off-kilter. Lauren knows she’ll always care about Nick like she’s always cared about Jack.

Phyllis suddenly gets an idea for her buyer and leaves the room. She returns with a list of cool things for the buyer to do and when Lauren pressures her, she admits she’s having thoughts about Jack since Amanda mentioned that she might have feelings for her. Lauren doesn’t think their relationship has ever been platonic. They’ve always had an undeniable, unbreakable connection. Phyllis sighs. She doesn’t know what to do with the thoughts that pop into her head. Lauren knows he’s missing someone special in his life.

Phyllis hopes she’s not implying that they should reunite. Lauren says they married twice and have never been out of each other’s lives. “We have a very special friendship,” Phyllis tells her friend. Lauren wonders if her issues with Sally also stem from her feelings for Jack. Was she a little jealous? Phyllis puts her head in her hand and wonders, “What if I do want more than friendship with Jack?” Lauren suggests she proceed with caution.

At Society, Ashland and Lily argue about whether or not Gaines’ story is real. She tells him someone hacked into their server. Locke says they just happened to find the story ready to go. He tells her that he worked alone for years and that if you tether yourself to the wrong person, that you go down together. Lily tells him a lawsuit isn’t going to stop them. Ashland sees things differently.

She tells him his name has always been associated with heartless behavior. Het ells er those stories are true. She says this is true, as well. They go back and forth and Lily tells Locke she expected more from him. She’s surprised he went along with Adam and Victor’s plot. They used him! Locke claims nobody used him.

Lily reminds him this isn’t about business but Victor’s longstanding feud with Billy. “Why are you going along with it?” Ash isn’t under his thumb. He’s trying to paint a picture of himself for his son. He advises her that this is about Billy’s inability to let go of Victoria. Lily insists he has but Ashland denies that. He thinks she should cut Billy loose and move forward on her own.

At the ranch, Billy offers to leave ChanceComm. Victor’s surprised he’s willing to sacrifice himself for Lily. Billy takes full responsibility. He asks that Lily be allowed to run ChanceComm without being punished for the choices he made. Ashley texts Victor to ask him to come to Abby’s right now. Victor will consider Billy’s proposal. Billy tells him everything he did was to protect his daughter. “Now you’re wearing the cockles of my heart,” Victor says. He goes.

Jack arrives at ChanceComm to see Billy. Jack tells him about the explosion and that Chance is presumed dead. Billy looks shocked. He thought he was invincible. Jack explains that Abby left Dom with Devon and went to clear her head. Billy will reach out to Abby. Jill has been calling and he hasn’t returned her calls yet. She’s probably wondering what’s going on.

Billy tells Jack about bringing Gaines to Tuscany to ensure Victoria knew the truth about Ashland. Victor and Adam found him and flipped him to their side. “Jesse Gaines cares more about his bank account than anyone else.” Billy yells that he made a deal with the double-dealer himself and never meant to release that article.  It blows his mind that nobody understands that the only thing he was trying to do was find out the truth. He calls them criminals. He gambled because that’s what you do in business, and he lost. Jack’s not there to condemn him but he’s concerned about his reference to gambling. He reminds his brother of how he risked it all and lost his job as CEO of Jabot. He put everything they built in jeopardy. Lily and Jill deserve better as do his kids. Billy asks him to tread lightly. Jack says he needs to turn this around. Billy says he has. He told Victor he would step down at ChanceComm if Vic left Lily and the company alone. Lily walks in, “You did what?” Jack gives them space and Lily starts yelling at Billy, telling him he can’t make a decision that so profoundly affects ChanceComm without even talking to her about it first. He was trying to do the right thing. Victor said he’d consider it. Lily can’t believe she trusts him. “Now you’ve left me to fend off the vultures on my own,” she snaps. She takes off out the door.

Victor arrives at the Chancellor estate and Devon tells him and Ashley about how Nanny Louise was with him when that note was dropped off. Victor assumes she knew they’d try to stop her if they knew what she was up to. Victor vows that he’ll put his people on this and she’ll be found. Victor assumes she chartered a plane. Ashley decides she’ll go to Spain. She has to convince Victor. A call comes in. Victor tells someone he’ll be right there. They found someone fitting Abby’s description in a restroom somewhere. Devon and Victor rush off.

Devon and Victor arrive at Abby’s hotel room. It’s empty except for one of the military pins. They realize she was there. Victor texts Ashley that Abby’s gone and to proceed as planned.

Jack arrives at the Chancellor estate and says hi to Ash and Dominic. He wanted to check on Abby. Ashley fills her brother in on what’s up. He’s shocked to hear she’s looking for Chance. Ashley’s following. Jack wants to go but Ash has someone from Victor’s security team. Jack insists so Ashley agrees. He reveals he needs a change of pace but won’t discuss his personal life. She becomes suspicious and begs him to tell her what’s wrong. When he brings up Phyllis’ name, she yells, “No, no no, please don’t tell me you’re rekindling that romance!” She reminds Jackie of how Phyllis hurt him. She clarifies that she’s not trying to be mean. Jack has to go pack. Ashley says fine, she’ll talk more about this with him on the flight. He goes.

Billy asks if Ashland and Victoria are asking for an apology.  Ashland tells Billy and Lily they’re there to make them an offer.

Amanda tells Devon the jury to give the verdict in Sutton’s case.

Phyllis asks Gloria if she’s flying solo. She says she isn’t. “Nobody wants to be alone at Thanksgiving.” She asks if Phyllis is alone today.

Ashley tells Victor if their daughter is in Spain, she’ll find her and bring her home.

Read the Y&R day ahead recap for Monday November 22: Ashland learns Victor’s plans for Billy, Noah divulges his secret, and Phyllis and Sharon have a nasty showdown.