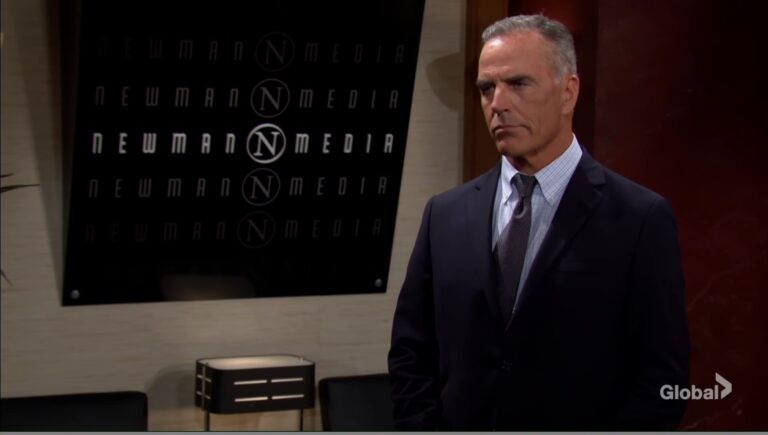 Canadian Y&R day ahead recap for Friday, November 19, 2021 episode, which airs in the USA Monday, November 22. (Recaps live by 5:45 PM EST daily.) In the previous episode, Phyllis wondered if she had feelings for Jack. In this episode of CBS’ The Young and the Restless,  Sharon notices how Phyllis is looking at Jack, and brings it up, causing friction, while Victor reveals to Adam what he’s going to do to Billy.

Phyllis sees Jack at Crimson Lights and asks him to join her for coffee. He explains he’s grabbing a quick coffee and snacks before a flight to Spain with Ashley to find Abby. He details the reason behind it. Phyllis calls his family lucky to have him.

Ashley drops by the ranch to tell Victor she’s ready to go to Spain and Jack’s coming along. Victor says he’s changed his mind. He tells her about the military pin he found in Abby’s hotel suite. Somehow that changes everything for him and he says he will go with her, not Jack. Nikki shows up and learns her husband is leaving the country. Ashley doesn’t see the point of both of them going. Finding the military pin doesn’t change anything.

Nikki sides with Ashley. If they both go, Abby might feel ganged up on. Nikki says they can stay in touch by phone and play to their strengths. Victor agrees to it. She’ll keep him informed. Nikki tells her to call anytime and to be careful. She takes off and Nikki’s surprised that Victor’s letting this go since he likes controlling everything. “Yeah, I still do,” he says, shooting her a look.

Noah is deep in thought at Sharon’s and he barely hears her talking. She asks what’s going on and he shrugs her off. She thinks there’s an issue but he assures he’s fine. He’s off for a run to clear his head. He goes and she texts Nick to meet at work to discuss their son. Later, Noah returns and Faith asks him to tell someone what’s bothering him. “Since when did you turn into mom?” Faith thinks it’s a matter of time until she bugs him. “I’ve got a PhD in mom handling,” she reveals.

She urges Noah to unload on her. He tells her about his artist girlfriend and she makes the conversation about her dating Moses. Noah brings it back to him competing with her in a fun way. He started getting more reviews and she began to resent him. They had bitter, nasty fights but he was already in love with her. When she left he was crushed. Faith’s sorry. He deserves better. He comments that success changes very little but when he explained that to her, she accused him of patronizing her. London became a place filled with memories he didn’t want to feel. Faith invites him to go for coffee. He goes to shower first.

At Devon’s, Devon explains to Nick that Abby’s off looking for Chance in Spain. Nick swears. Devon says that according to Christine, there’s no way Chance is alive. He assumes she’s in denial and will really be devastated when she realizes he’s truly dead. Nick wonders if he should go to Spain to find Abby himself. Victor arrives and recaps everything that Nick already knows and then tells them that Jack’s going with Abby. Vic asks after Noah. Nick is cold and says his cell phone number hasn’t changed. He takes off and Devon says he’s sensing tension.

shaCBSVictor calls it nothing out of the ordinary. Nick thinks he uses his children and manipulates them and pits them against each other. Victor denies it. “Nothing could be further from the truth.” He doesn’t like this tension. He’s protective of  his kids and this bothers him. He tells Devon that one day he’ll find out how protective being a father means. He says when Dominic grows up, he’ll find out. Now that Chance is dead, he’ll need a strong male figure. Devon would do anything for that boy. That makes Victor happy.

Adam brings Sally into his office to tell her he has learned she’s “quite the hot commodity” on social media. She tells him that people keep asking her to design the Victoria dress for them. People want interviews as well. Adam prefers his staff to create stories instead of being subject of one but he wants to make her an on-camera personality and it’s an opportune time to pull the trigger on it. She jokes that she can’t do it because she’s an introvert and then tells him she’s interested.

Adam tells her to put together a budget proposal. She already has ideas. He assumed so. She’s too driven to leave anything to chance. She admits she’s given up hope that they’ll ever see each other outside the office. Thanks to him and Chloe, she is poised to have an incredible career and doesn’t want to screw it up. She’s drawn to him but accepts work boundaries. She’s glad to be colleague and friends. She goes, leaving him stunned.

Sharon brings Tessa a drink at Crimson Lights. They discuss Mariah throwing herself into work. She thinks she’s feeling lost now that Abby left the baby with Devon. Tessa’s trying to be there for her while finishing up her first LP. Sharon congratulates her. Noah talked about her asking him to do the artwork. She brings up the heartbreak that she thinks Noah suffered in London.

Sharon finds Jack and hands over coffee and snacks. Sharon watches Phyllis’ reaction to Jack and looks curious. “What?” Phyllis asks. “You tell me,” Sharon retorts. Sharon implies that she and Jack are cozy and it’s only been a few days since her and Nick broke up. Phyllis calls her relationship with Jack none of Sharon’s business. He’s been a friend like Sharon has been with Nick and she’s not making it a big deal. She tells Sharon to zip it. Sharon would hate to find out that they broke up because Phyllis wanted to rekindle her relationship with Jack. Phyllis calls that a cheap shot. Nick walks up as Phyllis is asking that they move on. She tells him that Sharon’s poking her nose in where it doesn’t belong. Nick asks why she’s upset. She says it’s because she failed and nobody should pass judgement. Sharon grins and thinks she’s protesting to much.

Nick doesn’t want to talk about Phyllis with her so she tells him her worries over Noah’s break up. He shrugs. Dudes are like that. Nearby, Tessa sends Mariah a video about Thanksgiving pie and then deletes it when she thinks it sounds like she’s trying too hard. Faith and Noah turn up and she asks them to sit. The parents watch. Noah looks fine to Nick. Faith goes to get treats and when her parents ask how Noah is, she tells them he’s fine. Sharon’s relieved. She’s tickled that their little girl is old enough to be a confidant. Nearby, Noah feels cheered up by Tessa. She tells him that’s what friends are for and helps her record a video for Mariah. 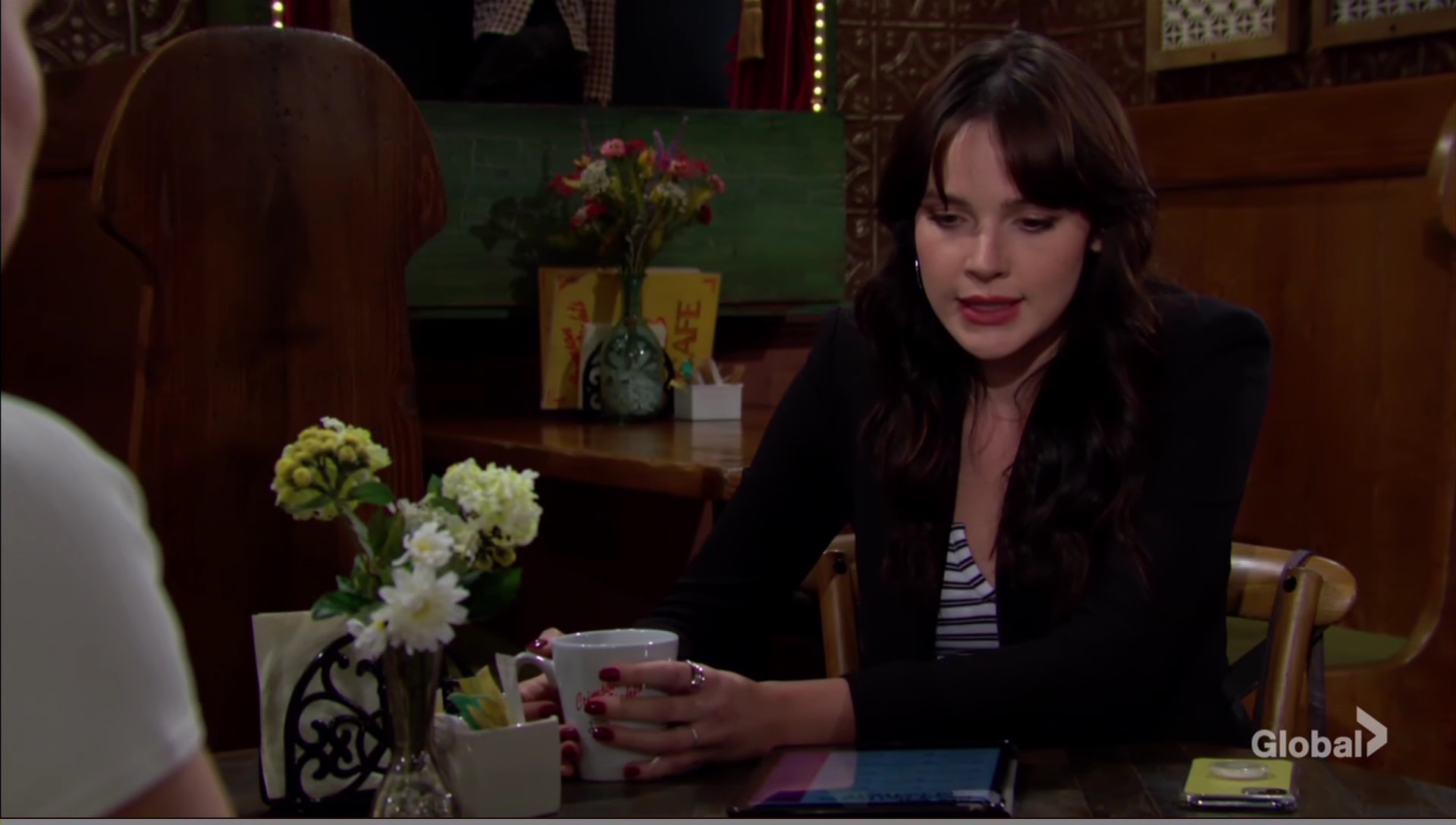 Ashland eavesdrops on Victor and Adam at Newman Media and overhears Victor tell his son that Billy will resign if they leave ChancComm alone. Victor likes that idea. Adam asks what he’ll really do. Ashland walks in and has the same question. Victor didn’t know that Billy had it in him. “That punk always plays the wrong hand.” Adam agrees he doesn’t know when to fold. He wants to buy ChancComm.

Ashland shares his run in with Lily, who thinks their whole move was based on animosity toward Billy and that he was used as ammo. Ashland was pleased to see him ruined for almost wrecking his wedding and he’s happy to repay the favor by doing whatever the two of them want. Vic says they’ll let Billy think they went along with him resigning and call a temporary truce and then when Lily goes to sell, they’ll buy ChancComm at a deep discount. Billy Boy won’t know what hit him. Adam asks when he’ll go down. Victor says they’ll let him dangle a while.

On the private jet, Ashley’s glad Jack’s with her on the trip. He’s focused on supporting her. She doesn’t think this Thanksgiving will be the one they wanted. Jack tells her that they’ll have one as soon as they can. They agree they’re thankful for each other. She calls Victor with an update that they’ve left GC. He tells her to be safe.

Read Monday November 22nd Y&R day ahead recap where Ashland and Victoria went behind Victor and Adam’s back with an offer for Billy and Lily!