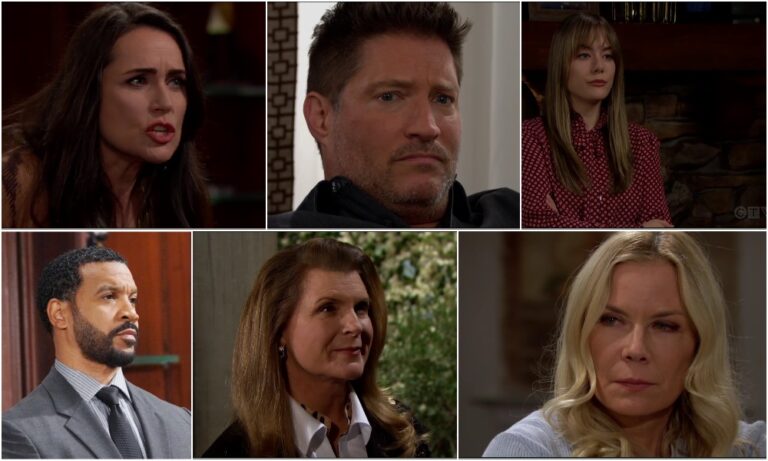 Bold and Beautiful opinion from complaints to temper tantrums.

The show is called Bold and the Beautiful, and but there have been times when I’ve referred to it as the Hopeless and the Insecure, or the Weak and the Ignorant.  We’re always complaining about how we wish some of the characters were more self-aware, or less hypocritical. We complain, nobody listens. We continue to watch and laugh because if we don’t laugh, we’ll cry.

From harpies to catty psychos, at least Bold and the Beautiful knows how to keep their characters a soapy mess. Still, I long for fashion shows, fashion house rivalries, and Bikini Bar scenes, but instead, we’ve had a grandfather with penile issues, licking honey off of a woman’s finger who was into that rather than being into the show’s hottest stud Carter. And if that wasn’t surprising, we had a grown woman whining to her mother and step-father that she wants to give her bio dad a chance and then throwing a temper tantrum when they give her an unequivocal no. As if somehow they should get a vote.

We’ve sat through a lot of comparisons between Deacon and Sheila but we all know that nobody, literally nobody is worse than Sheila Carter…Well, except perhaps Days of our Lives’ Kristen DiMera. While this Deacon and Sheila storyline might have fared better if Bridget was on the scene, at least we get Taylor thrown into the mix this December. Krista Allen will take on the role on December 10.

A few highlights of Bold and the Beautiful that annoyed, intrigued and were downright ridiculous… 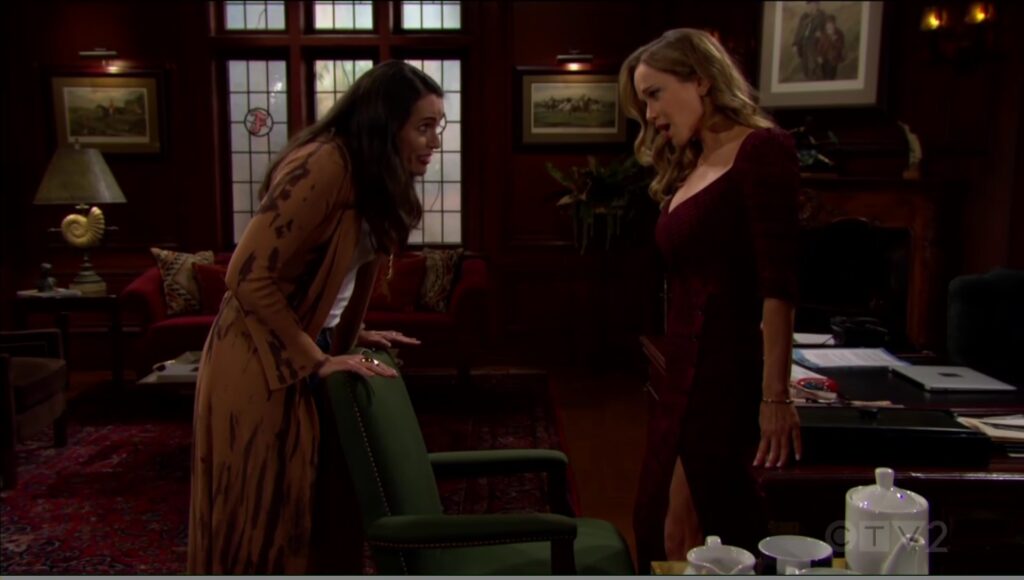 Quinn's psychoEric got turned on when he took it upon himself to lick honey off of Donna's finger. Quinn found out that Eric was turned on by Donna and went bananas. She stormed into Forrester and pinned Donna to the desk and threatened her not to...uh...turn on her husband anymore.

Quinn begged Eric to fire Donna because she was so insecure, she couldn't stand that Donna gave him an erection.

The mind boggles. Truly. The only thing Donna did that was inappropriate was to let her boss lick her finger and to keep talking about how in love with him she is. She didn't deserve to be fired for that insanity. That she's not fuming right now and threatening to sue makes my brain hurt. Bold and Beautiful must really hate feminism. He's still writing as if it's the 80s.

What I did like? The talent. They pulled off these scenes the best they could. The expressions on Eric's face were brilliant when he rose to the occasion, Donna who used to be a big schemer was deliciously demure, and Quinn's over the top reaction was true to character.
Share on Facebook
Share on Twitter 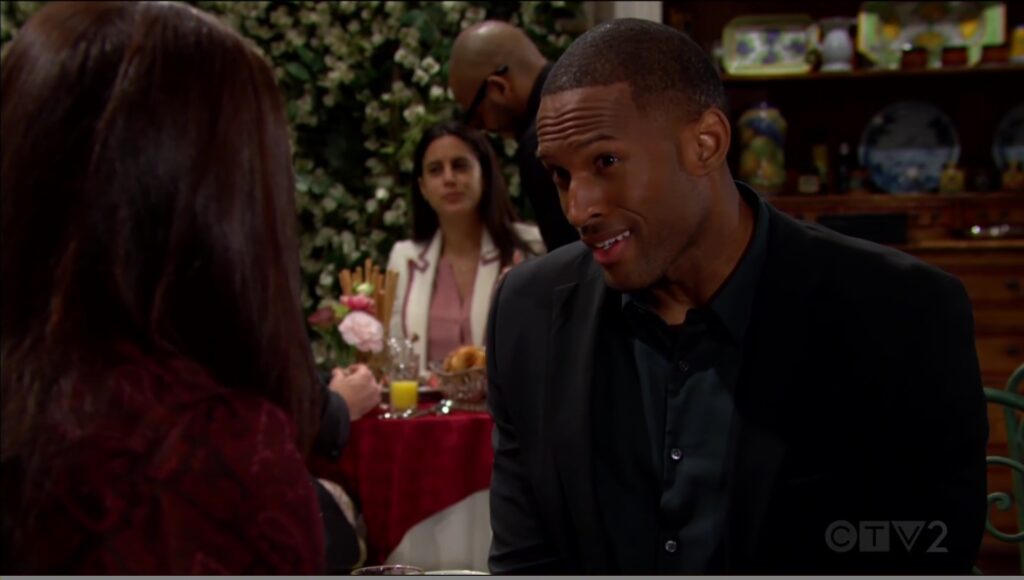 Carter & KatieThey gave us Carter and Quinn, who had chemistry to spare. They were one of the hottest couples in all four soaps and now, they're through, because the erectile dysfunction storyline wasn't written properly to keep people either entertained, informed or, well, not disgusted, and they had to scrap it.

Now, we have Carter and Katie. Zero chemistry, even as friends they've got nothing.

The groundbreaking story should have been about a menopausal women. Not men with penis issues, since the show's demographic is senior babes. It would have been much more relatable. But we can't have nice things. Instead, we got adjectives ripped from last week's dialogue when Thomas was gushing over how amazing Paris is!

Carter to Katie, "You're smart and accomplished and vulnerable, and funny." He called her vulnerable one more time, I guess because he forgot he had already used that word. "You're honest, a wonderful mother to Will, a good friend and sister. I don’t know where this strength comes from. I know you feel shadowed by your sisters but I see you."

Honestly, it was overkill. I was laughing the entire time. He said all this after telling her that they'd barely spoken even though they've known each other for years. Yet...he knows all of this. 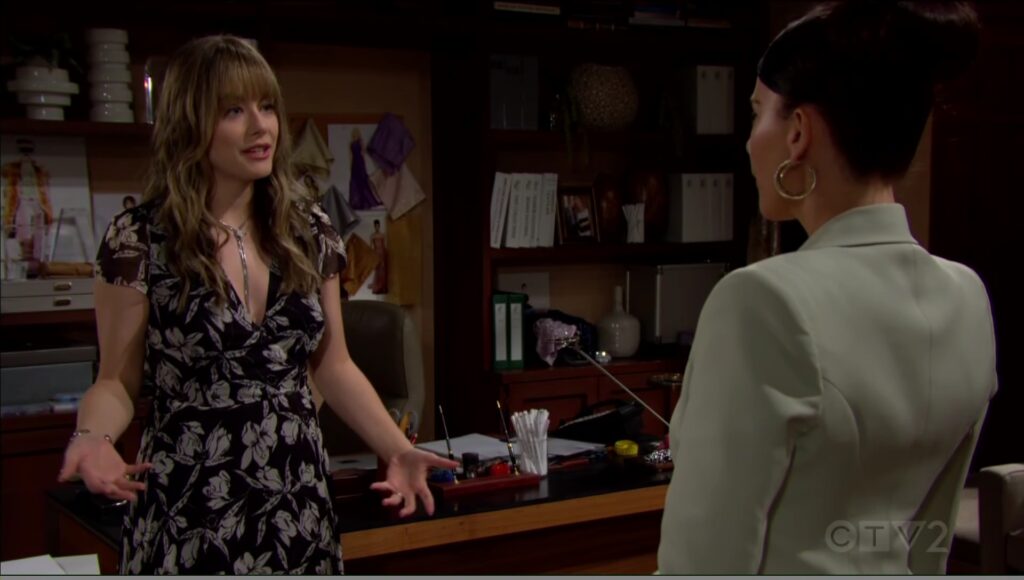 Hope vs SteffyIf Steffy and Hope never spoke again, it'd be easier on many of us who are tired of the back and forth between these two. I don't like that Bold and Beautiful constantly wants their viewers to take sides, pitting female characters against each other, which is the opposite of what any feminist wants to be doing.
Share on Facebook
Share on Twitter 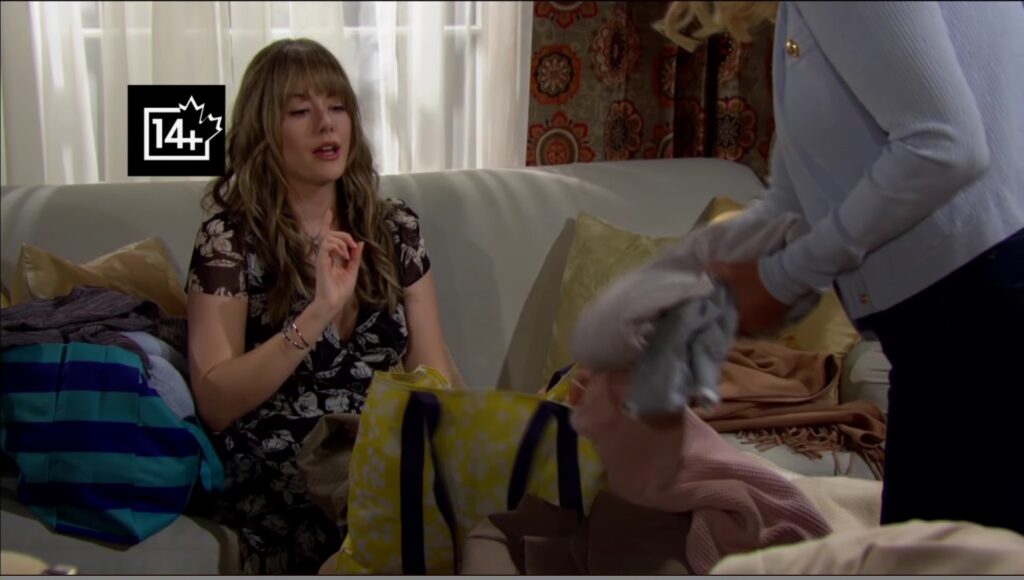 Hope regressesHope's a grown-assed woman who doesn't need her parents consent to do literally anything. But here we are with a story regressing her to a 13-year-old and asking her mama if she can let her father into her life. If that wasn't bizarre enough, the dialogue actually had her asking, "You must have been in love at one time for your love to have created me, right mom?"

This is a woman who has had a child. How is it possible that Hope doesn't understand that sex makes a baby, not love? Writing for plot is sometimes necessary, but dumbing down a character to this extent makes viewers think that the head writer thinks we're bumbling idiots. It's offensive. Do better!
Share on Facebook
Share on Twitter 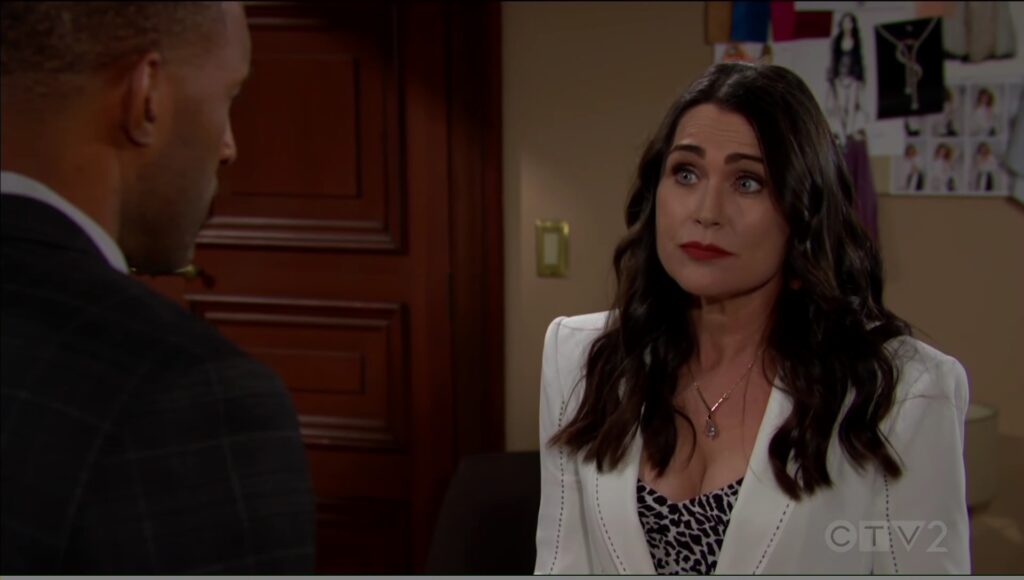 MY husbandQuinn stopped talking about MY husband, MY marriage for two seconds and went to see Carter. Why, nobody knows. I guess to clear the air. She explained that she and Eric would be better off if "Those Logan women would just stay out of our lives." But the Logan women aren't the issue.

Eric is the issue.

If Eric had cut the Logan women off from discussing his penile problems and defended his wife, this dumb story would have been put to rest a while ago. But none of these characters are self-aware, so they blame outside forces for causing them harm.
Share on Facebook
Share on Twitter 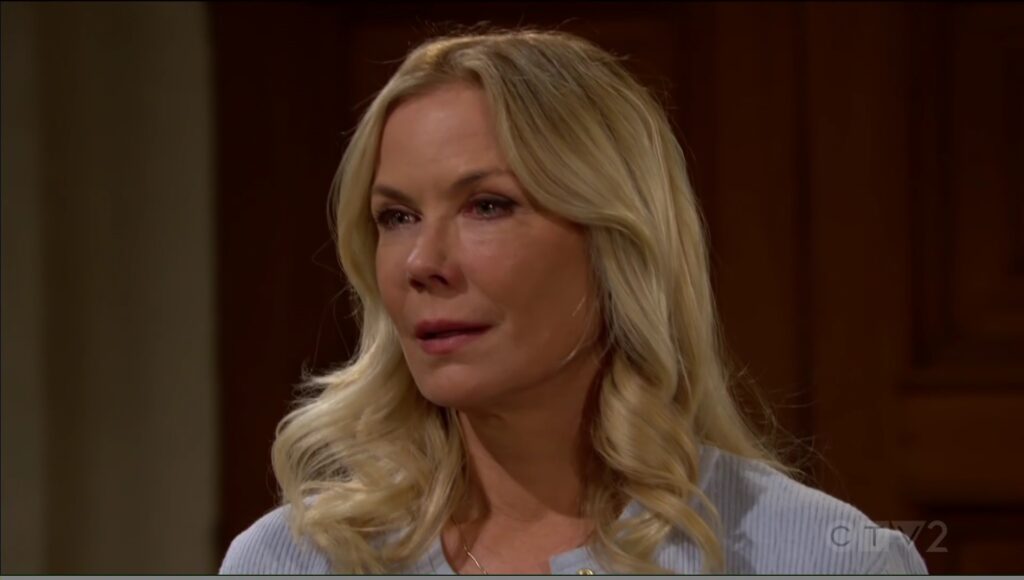 I was seduced!Brooke used to be kick ass. She went to college to study chemistry. She's the one who created BeLieF, the wrinkle-free formula. But instead of celebrating women or treating them like the queens that they truly are, they're written as catty insecure messes. Brooke should own this show but instead, she's relegated to retelling the story of how Deacon Sharpe, her daughter's husband at the time, "seduced" her into his bed as though she was victimized. This story would have gone over better if Bridget was still on canvas and if Hope wasn't a grown-assed woman who should by now already know this story.
Share on Facebook
Share on Twitter 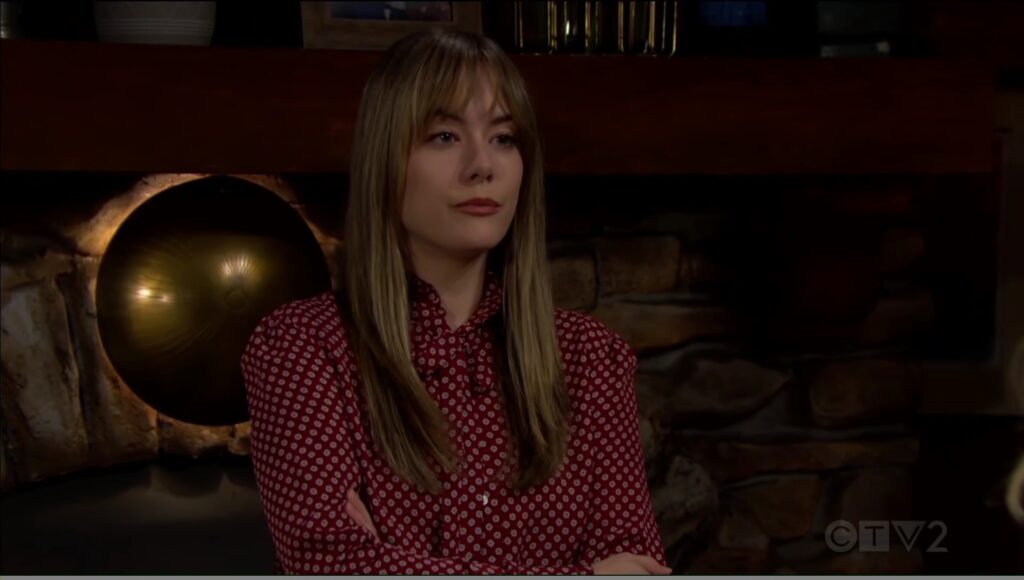 Hope's bangsI was thrilled that Hope stopped acting like a 13-year-old having a tempter tantrum and finally womaned up and got a backbone and told, not asked, told her family she was bringing Deacon into her life. This is the Hope we all want to see.

Now that she's got her backbone, can we get rid of the curtain bangs that make her appear like that 13-year-old? Keep the straight hair, lose the bangs.

Hope,"I mean we're all about second chances. Look at your dad, His latest stunt landed the two of you in jail, and yet he's still around."

Last thought: Ridge and Steffy should have been be more worried about what Psycho Sheila's been up to rather than Deacon. And Ridge is not one to throw stones since he had sex with Brooke while she was under the influence of anti-anxiety medication and didn't even know what the hell he was doing. Some call that rape.
Share on Facebook
Share on Twitter 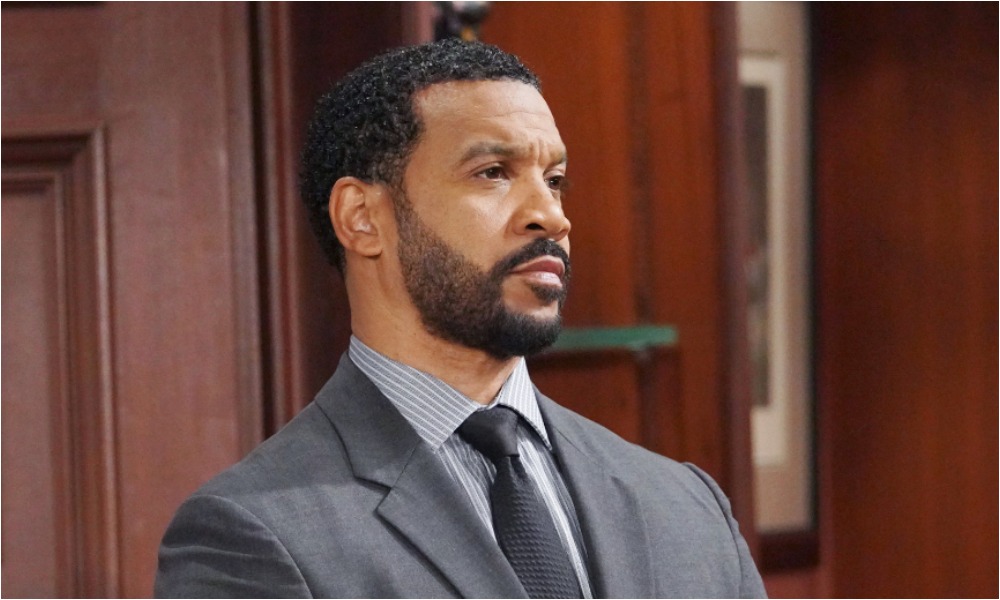 Having him spy on Carter and Quinn was bad enough but now Ridge wants him to spy on Deacon and Sheila. This a repeat of what happened two weeks ago. I understand that there are budget cuts all over but this dirty work seems beneath a corporate lawyer.

And frankly, all I see is that you have a black man doing a wealthy privileged white man's bidding and it leaves a bad taste in my mouth. Do better.
Share on Facebook
Share on Twitter 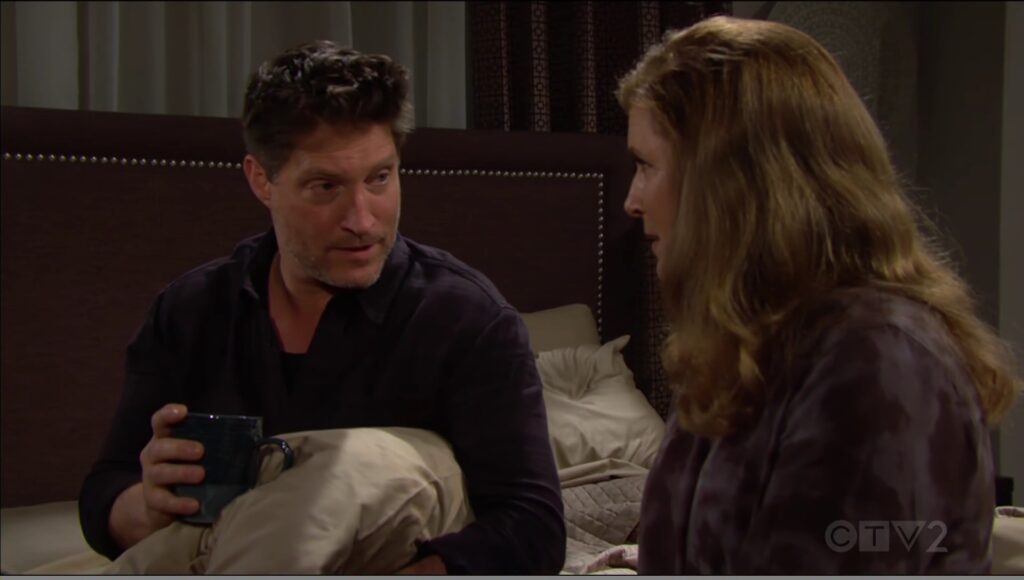 Deacon vs. SheilaWith all the fuss made about what a horrible person is and all the comparisons between him and Sheila, a new viewer would think that he's just as bad as her. He's done some really shady things, just as any character in a good soap opera has, including embezzlement, blackmail, kidnapping and attempted murder. But these crimes have spanned over 20 years, and the guy has done time twice. It's easier to consider giving him a second chance.

Not Sheila. Never Sheila. Sheila could have done all of those crimes in the space of a day. Deacon's a novice in comparison. If Hope wants to give her father a chance, knowing she could get hurt, she should do it. We all take risks in trusting people in life. Right now, Deacon does seem contrite.
Share on Facebook
Share on Twitter 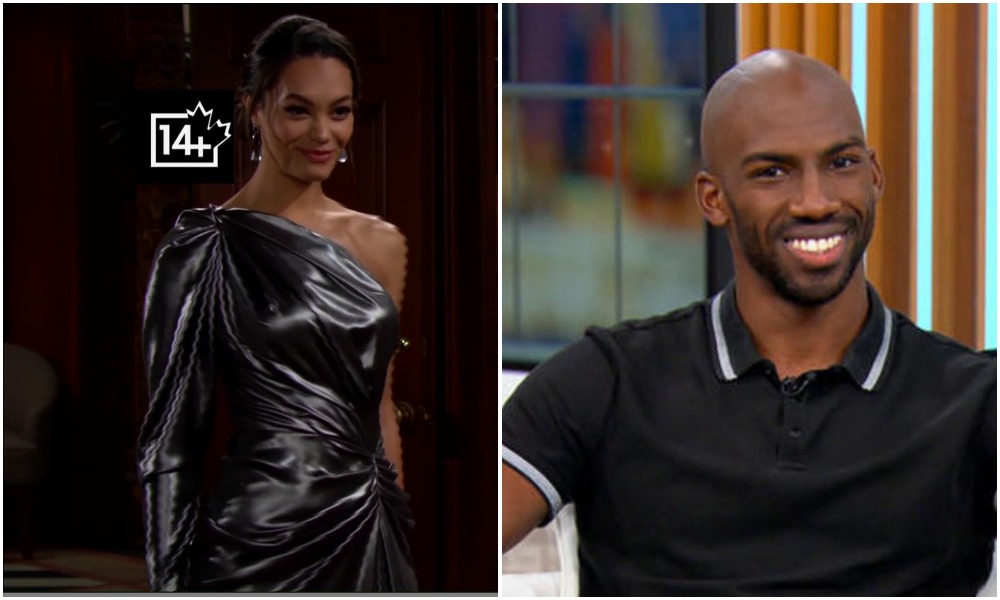 AppearancesAlexis Gaube appeared as a Forrester model on November 11 and Xavier Prather appeared twice, on November 8 and 10. To read more about which CBS shows these two hail from, check out SoapsSpoilers' B&B comings and goings.