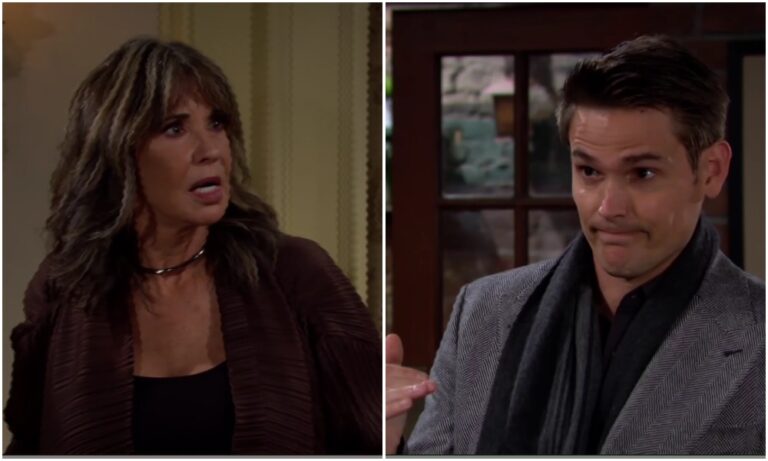 Canadian Y&R day ahead recap for Wednesday, December 1, 2021 episode, which airs in the USA Thursday, December 2. (Recaps live by 5:45 PM EST daily.) In the previous episode, Chance finally agreed to go home and Nina learned he was alive. In this episode of CBS’ The Young and the Restless, Jill is pissed when Billy thinks she’s siding with the enemy, Adam gives Billy an earful, and Imani and Amanda find a place for their new offices.

At the Chancellor estate, Jill was hoping Billy would be happy with Lily in the role as CEO at Chancellor Industries. He would be if she chooses to take it. “If?” She asks. She tells him she wants him to work with her and when he asks, she reveals she isn’t sure what she’ll do with ChancComm yet. He asks her not to sell it to Victor and Adam or it’ll reward them for their behavior. She can’t do what he’s asking. “It’s a business decision.” She needs to do what’s best for the company.

To Billy, it feels like she’s siding with the Newmans over her own son. Jill’s jaw drops open. She says she doesn’t deserve that and reminds him of how she gave him the job in the first place when he was at rock bottom. Nobody believed in him.

Billy thinks she’s given up on him but she argues that she’s done no such thing. He gets it and tells her the feeling is mutual. He talks about trying to protect his kids and that he thought Victor was going to do the same thing. He thinks that Ashland is as bad as Victor. He says he let it go but Jill heard that he spent a fortune paying off this Jesse Gaines to ruin them. She asks what happened with that.

Billy tells her he had a video that would have ruined Locke but he couldn’t use it. Jill yells. He could have end this! He says he couldn’t do it. She asks why he was bound and determined to stop the wedding. “Is it because you still have feelings for Victoria?” They’re nothing but co-parents he says, letting her know that he expects to be with Lily for life.

Jill brings up his gambling and the rush he needs. Why did he stop things? Billy says Victor told him he’d come after him and ChancComm. He never intended the blackmail article to see the light of day. He shouldn’t have sunk to their level. JIll thinks she gave him too much power before he was prepared for it. Billy insists everything was fine until Locke came around.

Mariah stares at a yummy drink Tessa has prepared at Crimson Lights. “It looks obscene,” she says. “Obscenely delicious.” She says her caffeine tolerance is lower so Tessa offers to drink the drink. Mariah refuses and they laugh. She mentions seeing Dominic and getting giggles out of him. Tessa grins. “Baby giggles are the best.” It sounds like she’s thriving.

She thinks Abby will be glad to hear when she gets home. “Whenever that is,” Mariah says, almost rolling her eyes. Tessa reminds her they were going to put themselves in Abby’s shoes. Mariah says she did a live stream with the baby, earlier. Tessa’s glad. She’s making sure he’s okay and loved. Mariah frowns.

Noah appears and tells Tessa he listened to her music today and says her voice is haunting and the songs are beautiful. She’s thankful. Noah thinks she has a hit on her hands. Tessa goes to take a call from her manager and the two discuss Abby leaving town. Mariah says she’s trying to be understanding. They talk about what it’ll be like when she has kids. They’ll have blue hair and be singing in the check out lines. They laugh and he says it seems things are going good with her and Tessa. She agrees they are though they had a few chaotic months. He’s glad to hear they’re doing well.  She brings up his ex and he doesn’t want to discuss her. He’s taking this time to relax and recharge. She thinks what comes next is an iconic album cover. He’s excited to get his “creative juices flowing.” She gives him Christian’s Pee Wee basketball schedule. He can scream from the bleachers to get issues out.

At home, Devon holds the baby and talks about adventures that he’ll go on. He puts him into the bassinet and Amanda rushes down the stairs with an apology. She shushes Imani when she arrives. Imani runs to see Dominic and coos over him. She asks what it’s like having a baby there. Devon calls it “never a dull moment.” They’re going house hunting for Imani’s parents.

The women are glad to focus on something new. Devon’s happy for them. If they need help in finding a place for their office, he’ll help. Amanda thanks him, but they’re looking on their own. They take off. Lily turns up. She wants to squish the baby’s face, he’s so cute. Devon says she’ll have to put him back down to sleep if she does. She needs brotherly advice.

She fills him in on what happened with the Gaines tape being a lie and that Jill doesn’t know what to do with ChancComm. Jill wants her CEO of Chancellor Industries. Devon’s shocked and happy. She’ll be running his grandmother’s company. Lily frowns. She talks about how she’s worried about where he’ll direct his fear and concern. She wants him to know how she feels. Devon thinks she should let him know.

At Society, Amanda and Imani have drinks and celebrate. Imani talks about learning to keep her mouth shut around Sutton, which was the path of least resistance. Now she gets to work with her sister and can’t wait to get started. Amanda’s happy she gained a partner and sibling. They talk about the places they’ve looked at today and disagree on which is best. Imani wants a high rise while Amanda wants a cozy storefront. The storefront is far from the court house, Imani complains, but the high rise seems too elite for Amanda.

They discuss the converted Victorian home which is homey and gorgeous. They talk about how gorgeous it is and decide that’s the one they’ll take. They drink to Sinclair and Benedict and Imani jokes, “Maybe it should be Benedict and Sinclair.” Amanda clinks her sister’s glass and says, “Girl.”

Billy runs into Adam at Crimson Lights and says he guess that Adam and Victor don’t have as much control over Locke as they thought. He tells him about Locke wanting to buy ChancComm. Adam thinks it’ll make things more interesting. Billy assures he’ll be back on his feet again. Adam shrugs. He says no matter who gets the company, nobody wants Billy attached to it. He tells him this is the price that Billy pays for that expose on him. “You brought all of this on yourself,” Adam says before he goes to leave Billy to wallow and flash back to Adam gloating the last time. Later, Lily shows up and Billy is deep in thought. He won’t say why. He tells her about his issue with Jill and says he turned down her job offer. He reassures Lily that when he gets knocked down, he gets back up. She can count on it and so can Adam.

Later, Tessa returns to her table with Mariah and Noah who discuss what she wants her cover of her album to look like. She wants it to be provocative. It should give her something else to discover every time she looks at it. He shows her a photo. “Something like this?” Tessa likes it. He shows her a few more and she’s wowed. They’re excited to get to work.

Adam arrives on Jill’s doorstep. Jill grimaces. “What the hell do you want?” He gives his condolences and talks about how Chance saved his life. Jill’ snot interested in a walk down memory lane with him. He talks about the future of ChancComm. He explains he was backing up his brother-in-law. Jill rolls her eyes. Adam calls her a shrewd businesswoman. She knows. She also knows he’s there to salvage the mess he made and get back into his daddy’s good graces. Adam thinks she’s misinterpreting his intent. She explains that she’s not going to pick up ChancComm as a bargain basement cost. “Ain’t gonna happen, Buddy.” She tells him to go to Plan B. He smiles tightly and says they’ll be in touch. He goes and she tells Catherine’s portrait, “Can you believe that guy?” 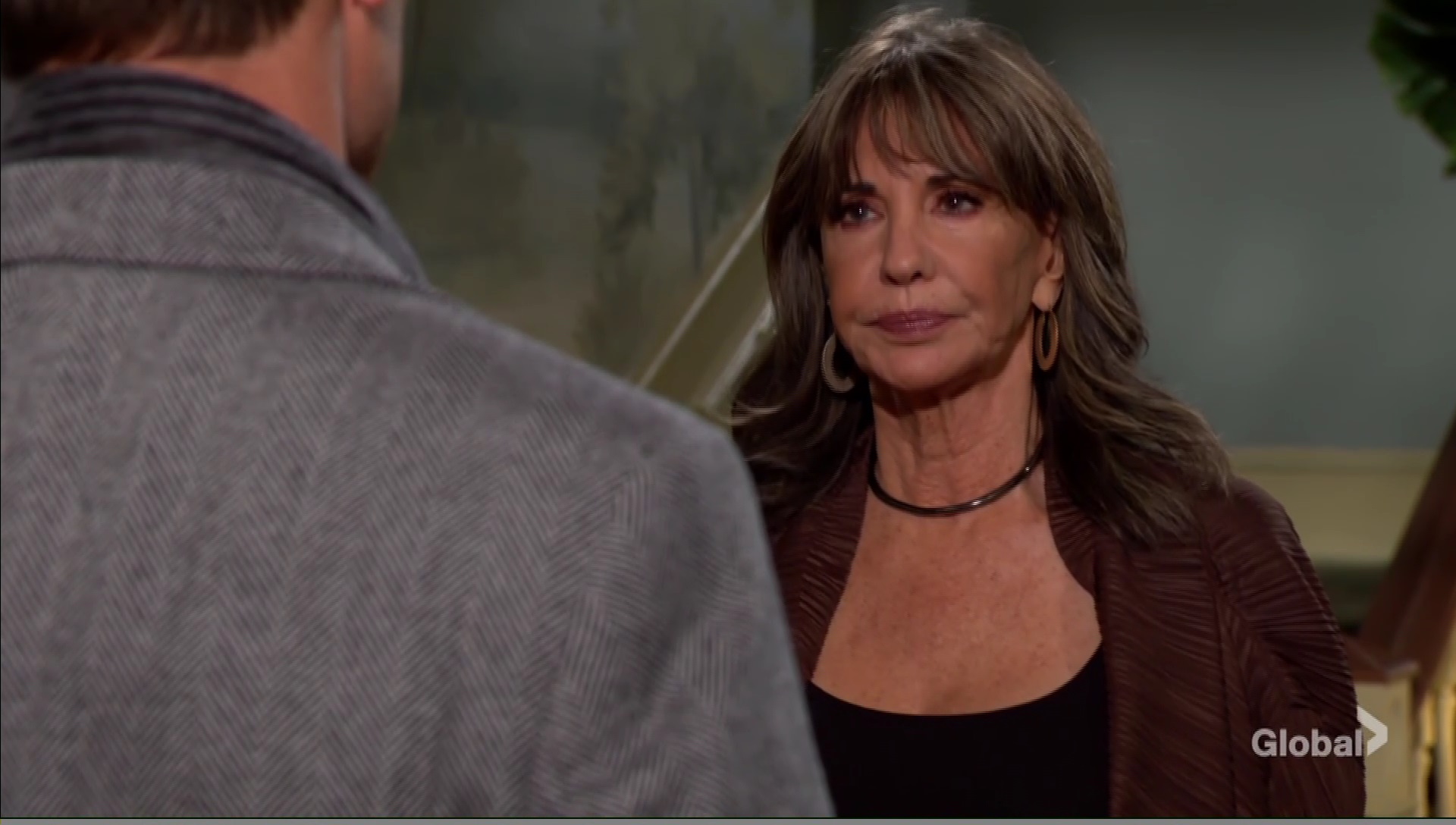