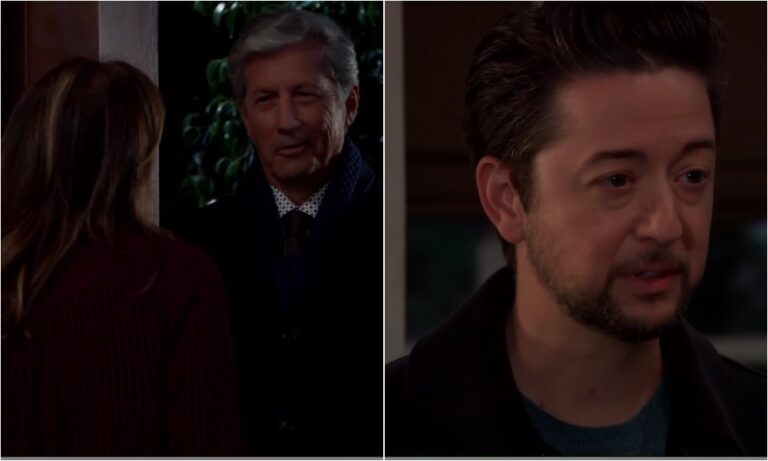 SoapsSpoilers’ General Hospital recap for Wednesday, December 1, 2021 episode. Recaps go live at approximately 3:00 PM EST. Today, Dante and Sam make love, Monica wonders to Drew if he is anxious to get his old life back, and Britt and Carly meet on the bridge. We also have Tuesday’s GH recap where Monica mourned Jason and Carly flashed back to her life with Jason as she dealt with her denial over his death.

Dante and Sam make out like bandits at home. He apologizes for overstepping but she wants this too. They make out some more and head to the bedroom. He’s hesitant but she motions to the bed and they make out.

They remove each other’s clothes and make love. Afterwards, he says it was a long time coming. She tells him it had to be about them, first. The phone rings and they ignore it. He asks if he should stay over or leave. She wants him to stay. She wants to be with him. He’s glad an wants the same thing. They snuggle.

At home, Spencer thanks Alexis for the wonderful dinner. Shawn looks at his phone as Esme and Spencer clean up. Alexis questions him. He brushes her off and says he doesn’t think Alexis likes Esme. “It’s  not about like. I don’t trust her.”

Outside, Valentin calls Scorpio and asks him to take action. He knocks and Alexis goes outside to let him in. She tells everyone to make room for one more and Spencer yells, “What the hell is he doing here?”

He rants for a bit and yells that Valentin shouldn’t even be able to use the last name Cassadine. The doorbell rings and Alexis storms off to get the door. “What fresh hell is this?” She sees Nikolas and Ava at the door. “Bad time?” Ava asks. Alexis says she has no idea.

She shows them who is inside and they show her the pies they brought. It’s been a year since Julian…” she says. Alexis is sorry. She knows he’s her brother. Someone else comes to the door.”Who could that be? Satan?” Alexis opens the door. “Hello Natasha,” Victor says. Alexis’s jaw drops open in shock. She looks around the room and realizes she was kept in the dark.

“You knew he was alive?” Victor asks where Molly and Kristina are. She say they had plans. Victor didn’t know she and Valentin were close. Alexis is shocked that they’re close. “We’re not, he’s my father,” Valentin says as Victor smirks. Alexis is horrified. He was with Helena? She grosses out. Nik asks if they’ve had DNA tests. They haven’t but are both willing.

Ava thinks she and Nik should go. Spencer begins to yell about him dressing as a stalker and stabbing him and then Victor whistles and yells for everyone to relax. Speaking of the patriarch, he says the blood feuds will cease, starting today. Everyone looks at each other, shocked. Alexis tells him he’s  been dead a long time and isn’t going to be the one to pull them together. He tells them the family is stronger together.

At the Quartermaine house, Ned and Olivia discuss Valentin becoming CEO of the ELQ. He needs to act fast, while he’s still upset over Bailey. Olivia won’t say anything. In fact, she calls what Ned’s making the right move.

She knows she can be reactionary and now she feels like she can trust his intentions with Leo and the family. “Does that include you and me?” He asks. She wants him in Leo’s life. He’s been the most fatherly figure. Monica and Drew interrupt. He tells him that he’s got a target on his back now from Valentin Cassadine.

Chase finds Brook Lynn outside and asks what’s up. She’s overwhelmed, trying to process Jason’s death and the miracle that Drew is alive. It puts her personal drama in perspective.

Not everyone is so lucky to be going home to their loved ones tonight. She worries about the kids bonding and then later learning that Bailey’s not hers. Chase asks how she’s doing. She shrugs him off. Chase knows when the secret comes out, she’ll be the one suffering. Has she thought about that?

She knows but  keeping Bailey safe from Peter is important. Chase thinks they soon  wont have to keep the secret. Mac turns up to ask Chase questions about Valentin. Brooke Lynn talks about Chase assaulting him, which is why he needs to talk to Chase in private about what happened.

He goes and when he returns moments later, he tells Brook Lynn he’s been suspended for six months. By the stairs, Monica asks if he’s seen Scout or Sam. He fills her in and notices she’s redecorated.

He likes it but misses the family photos on the mantle. She does too and it was hard putting them away but they reminded her of everyone they lost. Drew hugs her as she says, “And now Jason’s gone.”

She’s sure he’s anxious to get back to his old life. He knows he can’t expect to waltz into their lives after two years. The last time he was there he was trying to piece together his identity. Monica wants to help, telling him his place is there with family.

At the bridge, Carly sees Britt walk up. Britt apologizes. She didn’t expect anyone to be there and thought she could…Carly understands. She tells Britt that the original bridge was torn down and Jason requested it be rebuilt. Britt sobs.

She knew it meant a lot to him and imagined that’s why Carly is there. Carly says before the wedding, Jason talked about her a lot in the lighthouse. She wipes away tears. Britt knows how much Jason and Carly meant to each other. “Do you want me to go?” Carly says no. She apologizes for lashing out at her earlier. She didn’t mean what she said. Britt knows.

Carly knows Jason would want her to have generous thoughts. She says they don’t come natural to her. She wipes tears from her face. Britt gets it. Carly doesn’t want her to go. Britt comes closer and pulls her to her side as they mourn their loss together.

At home, Cyrus disconnects their call and Sonny throws his phone in a fit. “You want a war. I’ll give you a war.” Spin turns up. Sonny appreciates him coming over on short notice, especially on the holiday. Spinelli shrugs. He hasn’t had much to be thankful for. Sonny asks him to trace a call from a burner phone.

Spin’s shocked Cyrus called him. “How distressing.” As they talk, Sonny assumes he’s heard about Jason. Spin asks if he’s back from Greece. Sonny admits they never found a body, but Jason is presumed dead. Spin chokes up. Sonny says he knew the risks. Spin breaks down in Sonny’s arms. He needs time to sit with the news and Sonny says to call if he needs anything.