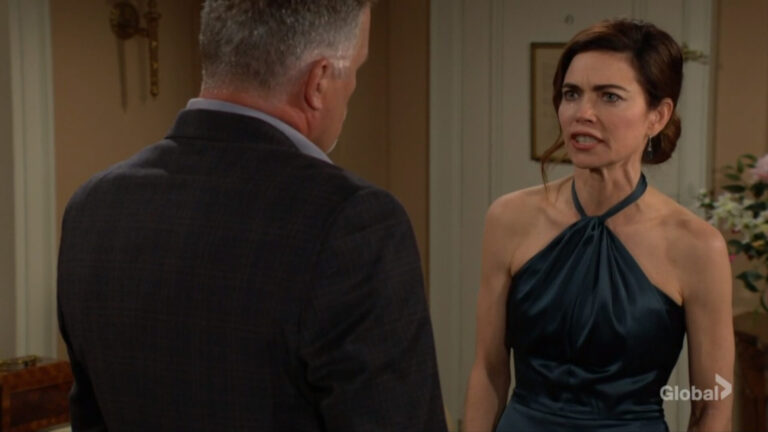 In this episode of CBS’ The Young and the Restless, Nikki learns of Victoria’s plans to return to Genoa City, Chloe and Chelsea have it out one last time, and Sally can’t wait to snap Chloe up at Newman Enterprises. In the previous episode, Victoria swindled Ashland, and Adam had some unwelcome wisdom for Chelsea.

At Crimson Lights, Nikki hopes Victor’s plan for Victoria works. He gets a text and says he’ll find out. “Whatever that means,” she says. He tells her the pilot has interesting news about the company jet. Nick appears. Victor tells them both that the pilot informed him Victoria filed a flight plan from New York to Genoa City for one.

Nikki thanks God. Nick worries, and Billy strolls up, wondering why they’re all serious. He asks if they’ve heard from Victoria. Nikki denies it. Billy’s glad Victoria’s breaking free from Victor at least but can’t help they’ve learned something new.

Ashland walks in on Victoria with her bags packed in their suite in New York City. He sees the luggage and asks Victoria what’s going on. Was she planning on sneaking off without him?

She says, “Of course not.” He forgot his tablet with proof of funding. He thought she was headed to the lawyer’s office and notices Victor texting her. He grabs her phone and looks concerned.

He reads the text and learns the jet’s on the way. Victor asks if she’s alright. Victoria tries to deny leaving him but he can see right through her. 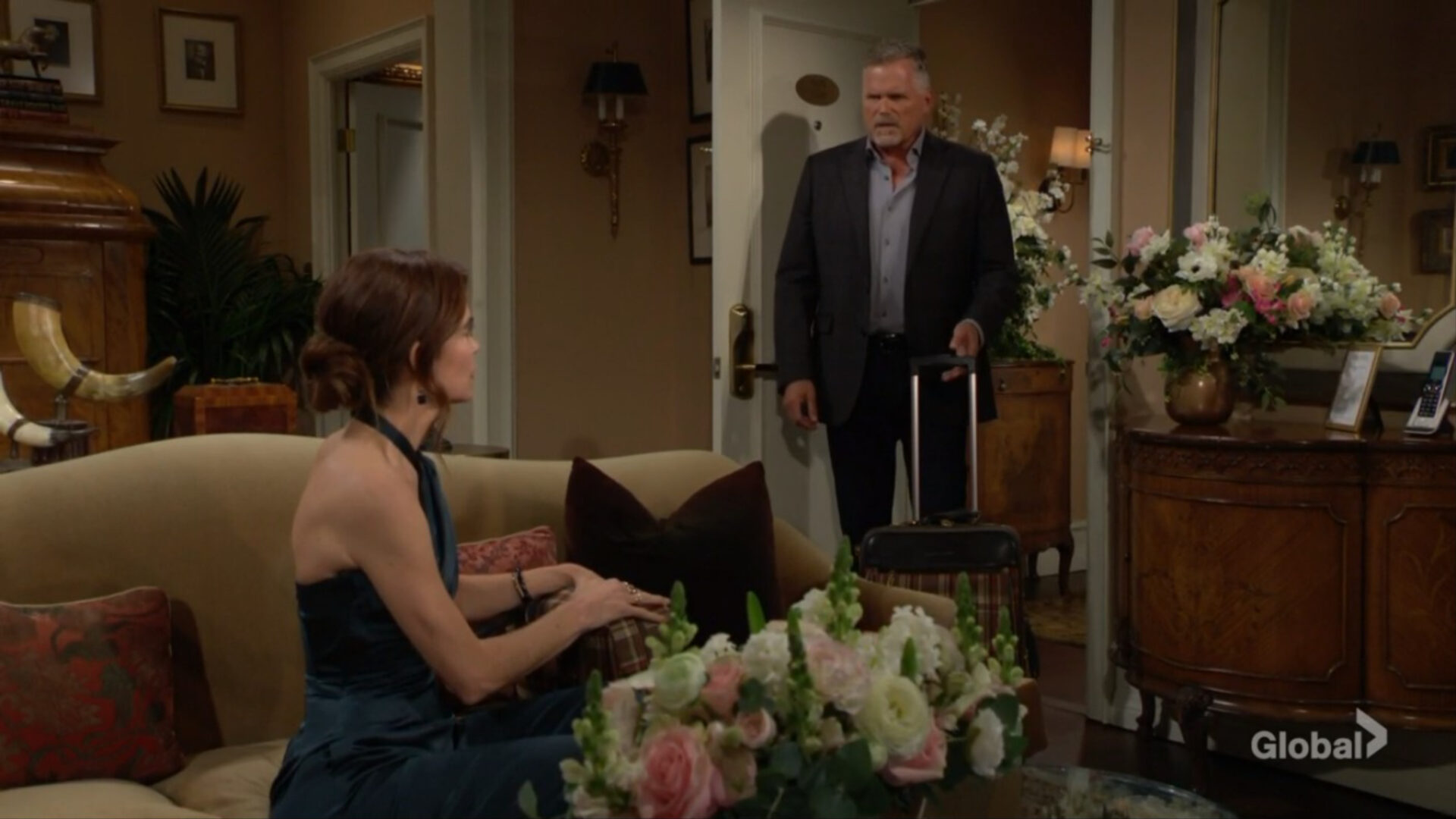 At Newman Media, Adam visits Sally and they discuss Chloe being a fit for the company. Sally wants to scoop her up if she’s ending things with Chelsea. Adam thinks she’s struggling with Rey’s passing. So is Connor. Adam says she’s using work as a crutch, which is true to form.

It’s creating a rift between her and Chloe. They agree Chloe’s at the end of their rope. They talk about Chelsea working for Marchetti as a designer. Sally’s surprised but calls it an incredible opportunity.

Adam explains the argument between the women and that he’s siding with Chloe.

Sally wonders if parting ways is best for both women. Adam tells Madam CEO to hire away. She likes that and hopes the timing is right. Adam knows Chloe hates his guts but says he has no issues with her.

They did some great things while they worked on the fashion platform. He has faith in her. She’s grateful and thinks if she had a quarter for everyone who said that she’d have a quarter.

He trusts her and they embrace. He gets a text about the pilot heading to New York City and wonders why. He requested it for himself and his son. He calls the pilot and learns Victoria requested the plane.

He disconnects and tells Sally that Victoria’s coming home alone. He assumes that his father is putting her back in charge. Sally tells him to slow down. They don’t know that’s what’s happening.

Adam thinks he knows. “Machiavellian behavior the Newman stock and trade.” They bash Ashland a little and Sally thinks Victoria may be returning to call a truce with her parents. She seems practical and will want to know she has her family’s support. Adam considers that. Maybe Ashland pulled some “new crap.”

At Society, Chelsea and Chloe argue that she’s over an hour late and she’s acting like deadlines are optional. Chelsea says she’s under a lot of stress. Chloe knows and says she’s all over the place. She can’t keep up.

She’s tried, but all she gets is snark and putdowns. “Things can’t go on this way.” Chelsea barks out asking what that means. Is she quitting? Chloe snipes that it’s not working but she wants to find a way that it can.

She doesn’t want Chelsea to become so defensive. Meanwhile, Chelsea becomes defensive. She’s sick of Chloe not being appreciative of her. Chloe’s rocked. “How dare you say that after all I’ve done for you.” Chelsea’s aghast. “After all you’ve done for me?”

Chloe reminds her of her dark path during her medical issues. Chelsea made her an unwitting co-conspirator. She’s not bitter about it but if it came out, she and Kevin would have been in trouble.

Chelsea thinks Chloe’s acting like it’s a one-sided friendship. Chloe says she worked for Adam for Chelsea and worked at the fashion platform for her. She practically begged her friend to come work for her because she loves working with her. Chelsea is surprised.

Chloe tears up, that Chelsea’s calling her a bad friend, especially since she’s trying to preserve their friendship and working relationship. They argue and Chelsea calls Chloe controlling.

She says if Chloe wants out of their partnership, “Be my guest!” Sally walks up and witnesses the spectacle. Billy sees Chelsea on the way out and asks if she’s okay. “Not even close,” she says.

Later, Sally approaches a tearful Chloe. Sally doesn’t want to make things worse but she overheard and thinks things are strained between the two. She offers to lend an ear and to provide an alternative.

Back in New York City, Ashland learns Victoria’s going back to Genoa City. He asks if her family got to her. She regrets some of what she said to her family but it was done to prove her independence.

Ash asks if she’s having second thoughts about leaving her family.

She barks that she could never leave her family. The fact that he could think that proves how little he knows her. He’s baffled. She says they won’t be forming a new corporation together.

The move was calculated to cut ties with him and to end his connection with her and her family permanently. She reveals she drained the account and now he knows exactly what he’s dealing with. She calls every single moment they were together a lie.

She suffered at the prospect of watching him die of a nonexistent disease. He crushed her. She’s not even sure him saving her from a burning car was selfless. He says he couldn’t bear losing her but she reveals it’s not good enough.

He doesn’t deserve the money from her father. She’s not even sure he’s capable of feeling guilt. She lets him know she deceived him the same way he did to her to get that money back. She doesn’t think he’s capable of feeling remorse and shows him that she drained the accounts. He tells her that this isn’t what she wants. She asks how the hell he knows that.

She calls him arrogant and that he has a hold on her. He calls their love real. “It was, at least on my part,” she admits. Everything she’s said to him since Switzerland was a lie. He admits he should have known since she wanted to take things slowly.

She calls it the secret of any successful con. He agrees. “You’ve got me. Congratulations.” She asks how it feels to be wrong about her and bested. He accuses her of committing fraud. She laughs. It’s rich coming from him.

She has proof to back up if he tries anything. He asks if she’s satisfied. Was it worth it? “Yes,” she says, tearfully. He thinks she’d make her father proud, which she calls manipulative.

She calls him ‘nothing’ and ‘no one’ and he tells her he loved her with his heart and soul. She doesn’t believe he has either. She tells him she doesn’t care what he does. They’re through. She gets her things and goes and he slams the door behind her, looking glum.

Billy follows Chelsea to the park. He asks what’s up. She tells him Chloe’s getting on her last nerve. She tells him about their fights and he is understanding. He calms her down. She realizes Chloe’s the best friend she’s ever had and starts to feel bad.

He tells her not to start a podcast and reminds her she called his boring. She laughs and feels a little bad but he tells her he took it badly because he knows she’s right about his podcast. They joke about being mature.

Adam arrives at Crimson Lights. He was going to use the company jet to take his kid to a game. He asks what’s going on, and why Victoria’s taking the jet when she doesn’t even work for the family. Nikki asks if he can fly commercial. Adam says there are no spots on any flights. He asks why Vicky needs the jet.