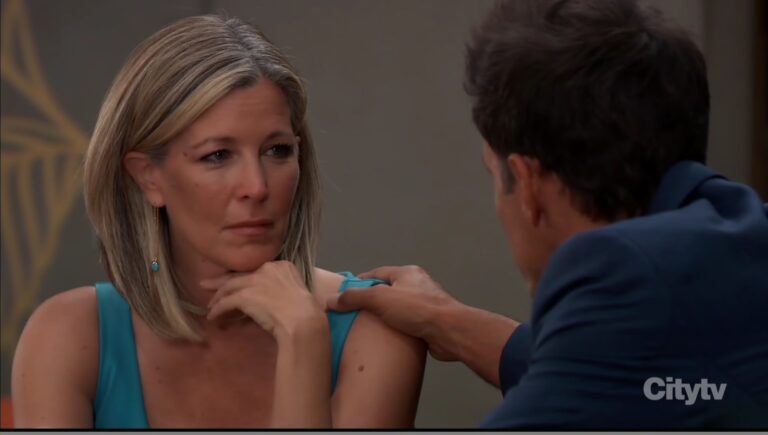 What’s coming up on General Hospital this week? Esme distracts Rory, Cody walks in on something, Brook Lynn wants Sonny’s help, and Britt gets something unexpected.

What’s coming up? Romance! Scotty gets down on one knee and proposes marriage to Liesl, Nina shares a kiss with Sonny, and is it confession time for some?

Watch this week’s GH spoiler video for what else is in store and read the rest of the spoilers below! Don’t forget, SoapsSpoilers also recaps General Hospital daily from 2:00 PM to 3:00 PM with the recap going live minutes later!

This week, Sasha has a meltdown and yells at Lucy and Maxie to stop it! They’re in shock at her outburst.

Meanwhile, Britt tells Spencer that if he doesn’t leave she’ll throw him out. And Olivia asks Ned if this is worth alienating his loved ones. Of course, they’re talking about his standing with Valentin over his family over ELQ. And, Carly sobs in Sonny’s arms.

Congratulations to General Hospital who won an award for Oustanding Daytime Drama series. Check out their Emmy reel. And find out who won in the 49th Annual Daytime Emmys for all four soaps!

Olivia faces off with Nina and Sasha, and things take a turn when Willow arrives.
Sonny tells Brando and Dex they have to get along.

Ned argues with Michael and Drew.
Lucy tries to be a go-between.

Drew warns Valentin.
Word of the non-merger gets around.

Carly celebrates with Joss and Bobbie.
Carly talks about once going in for nursing.

GH was pre-empted for news coverage. In the place of a new episode, some markets aired a repeat of the episode from New Year’s where Nina picked up drunken Sonny, and Curtis and Portia had sex.

Wednesday’s GH recap: Carly could be in big trouble

An unexpected event surprises those at the Metro Court Pool and leads to a revelation.
Leo overhears Michael talking about his next move regarding Sonny.

Anna makes an admission about Valentin.

TJ supports Epiphany in her studies for the MCAT.
Turrns out that Willow is pregnant.

Esme flirts with Rory at the Metro Court Pool.
Trina, Curtis and Marshall strategize about her upcoming court date.
Sasha and Michael reconnect.

Esme asks Nik to use his car.
Nik tells Esme that them having sex was a mistake.

Ava panics and decides to call off the divorce.