Home » Young and Restless » Y&R Recaps » Abby Pops a Pill And Passes Out, Leaving Dominic Crying, While Devon Suggests to Ashley That Dominic Move in With Him For a While

Abby Pops a Pill And Passes Out, Leaving Dominic Crying, While Devon Suggests to Ashley That Dominic Move in With Him For a While 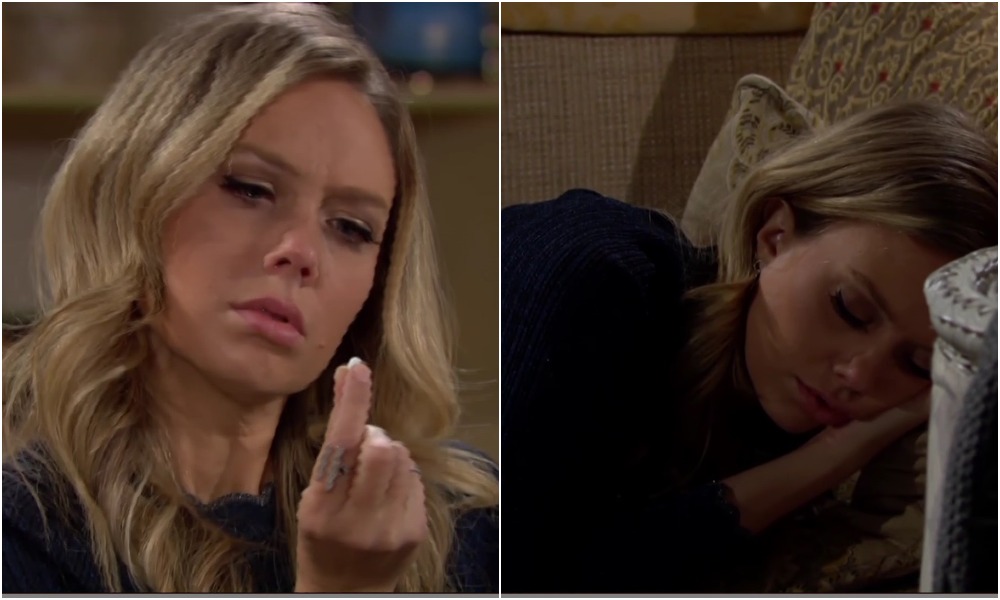 Soaps Spoilers has the Canadian Y&R day ahead recap for Wednesday, November 10, 2021 episode, which airs in the USA Thursday, November 11. (Recaps live by 5:45 PM EST daily.) In the previous episode, Sally and Phyllis fought. In this episode of CBS’ The Young and the Restless,  Abby finally decides to relax, and takes a pill to help her sleep, while Billy is worried his plan has gone to pot.

At ChanceComm, Billy tells Lily that he’s a step ahead of Adam. He’s cocky when he tells Lily that he should tell Adam that Gaines isn’t on some beach somewhere. Lily thinks they need to take a pause. She’s calmed down and thinks it’s a bad idea. She doesn’t want to use someone’s past against them, especially since Ash is a step-dad to his children. Lily thinks they can take the Newmans on themselves. Billy maintains that they need to strike first. Lily thinks it’ll only anger them more. What if Gaines doesn’t go along with it? Billy says he can control Gaines. “Really, like you did in Tuscany?” Billy goes to talk to the man, as Devon wanders in. He asks for advice and tells her about Chance being presumed dead. Abby’s moving between denial and despair and he doesn’t know how to help. He tells his sister about Abby wanting to go to Spain. “It’s irrational and dangerous,” Lily says. Devon is concerned for the baby and Mariah, instead of stopping Abby, offered to move in and stay with Dominic. Lily’s surprised. “Do you think she’s using the crisis to get closer to Dominic?” Devon says not intentionally but does agree that the stress is felt by the baby. Devon is thinking they should move the baby out of the house for a while. He wants to take on the baby but doesn’t know how to approach her about it. She’d have to agree to it.

Victor stops by Adam’s office at Newman Media. Adam says Billy’s still in the office. His source just told him. Adam’s sure he’s strategizing against them. Victor’s disappointed that Lily’s going along with Billy’s schemes. She’s Neil Winters’ daughter. He thought she had more sense. Adam admits she turned him down when he offered her a job. Victor knows she’ll come to regret that. Outside, Sally eavesdrops as Adam says 6:00 PM is the deadline. Victor thinks they’ll be hearing from them soon. Ashley walks up, surprising Sally. “Did you hear something juicy?” Sally says she’s waiting for Adam to get out of a meeting. Ashley tells her to find something else to do since she has to talk to Victor. Sally takes off and Ashley knocks. Victor lets her in and Adam calls Chance a great guy. He feels terrible for Abby. He’d go over but doesn’t want to upset her. “Okay, I’ll pass on your condolences,” Ashley says before Adam goes. Vic asks what the story is with their daughter. Ash tells him about her plans to go to Spain and that Victoria persuaded her not to. Ash is concerned she’ll be crushed by her grief. Once Ashley’s gone, Adam and Victor talk about Abby. “I’ll do everything in my power” to get her through this, Victor says.

At home, Abby rocks crying Dominic. Nina asks to help. Abby asks for a bottle and Nina asks if she should call in the nanny. Abby refuses. “Just the bottle, please,” she says, frustrated. She tells the baby, “It’s okay.” Nina appears later with a bottle and offers to feed him if she wants to rest. “I can feed my son,” Abby says, on edge. The news from Spain doesn’t change that she can take care of her son. She tells him they’re in this together and can get through it. The baby cries and cries. Finally, he goes down to sleep.

Nina hopes they can both nap but she has to check in with the restaurant. She can’t so Nina suggests she ask Devon. “He’s already done so much for me and I hate it,” she yells. She quickly backtracks. It makes her feel weak, but she knows that they’re helpful. Chance wouldn’t want her to be that way. She tells Nina she needs to call Jill and can’t bring herself to do it. “How can I find the words?” Nina admits she already told Philip and Jill, who wanted to jump on a flight there. She told Jill to wait it out. “She can be a bit much.” Nina gets a text from Christine saying to call her. She lies to Abby that it’s her agent and goes to call Christine. Abby spots the medication that Nate prescribed on the mantle and takes a pill. She passes out and the baby cries. In her sleep she says, “Where’s my baby?” Later, she hears Dominic and wakes up. The baby’s not in his bassinette. She looks up and sees Nina sitting with the baby. Abby looks worried and says she took a pill. Nina thinks it’s a good idea. They all need a break. That’s why she’s there. Abby worries that her kid doesn’t know who his mama is since he’s spent so much time with others. “Nina, I don’t think I can do this,” she admits.

Rey finds Billy at Crimson Lights. Billy says his search for Gaines is over. He let it fizzle out. Rey asks if he showed up. Billy lies and says no. He doesn’t think Adam’s going to jeopardize the changes he’s made to his life. Sharon brings Billy’s order and goes to add cream but Billy says this is for a writer who is on a deadline. He goes and Rey tells Sharon Billy isn’t as good of a liar he thinks he is. He seemed to be defending Adam. Sharon’s taken aback. Later, Ashley pops in for coffee and Sharon tries to help with what Abby’s going through. Later, Sally appears and wants to interview Ash. Ashley doesn’t want to be rude but says, “Hell no.” It’s because of what she did to Jack, Kyle and Summer. Sally says they’re all over it. She’s trying to build a bridge but now wonders why she’s bothering. She goes and Devon appears. He goes to her for advice about taking Dominic home with him for a while. He doesn’t want to overstep his boundaries. Ashley calls it a sweet offer but she has the nanny, her and Nina. Devon is concerned that Dominic’s absorbing the stress and negativity. Ashley hears him. She thinks they should watch for it but not deprive time with his mom. The bond is so important and will help Abby heal. She thinks the baby needs to stay with Abby. Devon understands. He hopes she’s right.

Billy brings Gaines some coffee at his no-tell hotel room. He asks when the story about Locke is breaking. Billy wanted to talk about options. Gaines doesn’t like the sound of that. He fought to get there to take down Locke. Billy says the Newmans are coming after his company. Gaines asks if he’s going to expose Ashland or not. Billy hems and haws and Gaines becomes angry. He’ll find someone else to publish it and the Newmans will be after him still. “Stupid move, Abbott,” he says. “Stupid move.” Billy says that withholding Camila’s letter is his power. He’ll use it to protect them and ChanceComm. Meanwhile, he’ll keep him safe away from Genoa City. He’s sure that Ashland will be living in his private hell until he dies. Gaines likes the sound of that.

Back at Newman Media, Gaines does a video chat with Adam and Victor. He tips his Crimson Lights cup up and tells them he’s back and has Camila’s letter. He wants the world to know about the fraud that started Locke’s empire. The world will know if he doesn’t listen to what Billy tells him to do. He shows Billy beside him and waves. He disconnects and Adam and Victor smile, smugly. Adam texts Billy that he’s bluffing. Billy gets his back up and tells Gaines to lock the door behind him. He has to go.

Billy returns to ChanceComm and updates Billy about what just happened. Adam told him, “Nice try.” He’s daring them to expose Ashland’s past. They can’t be going against each other. He needs to do something and fast. Rey walks in and questions what he’s talking about.

On a call, Adam says, “Time to pull the trigger and blow this thing wide open.” Sally has overheard.