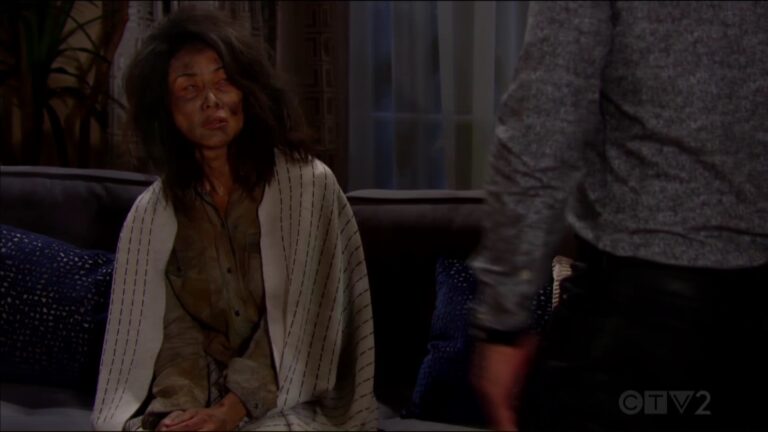 In the Monday, July 25, 2022, full episode recap of CBS’ Bold and the Beautiful, Wyatt and Liam worry about their father’s mental state, Bill has a doctor check on Li, and Mike warns Sheila the walls are closing in.

We also have Friday’s B&B recap where Bill found Li and took her home to heal while Finn started to lose it with Sheila.

At the hideaway, Sheila tries to calm Finn down but he climbs out of bed, screaming in her face, and declaring that he is leaving… but not before he makes her pay for what she did to his mother.

She repeats that was an accident but he refuses to believe it and grabs her by the throat. Grabbing a syringe, she jabs the needle into him and he collapses.

After she puts him back in bed, she wishes he would just let her love him. Mike bangs on the door. She gives Finn a peck on the forehead and then lets Mike in. He tells her the cops have questioned him.

“And you decided to come straight here?” she asks. He doesn’t appreciate her tone and admits it was a risk. The walls are closing in and they have to act quick. When he claims he can hear sirens, she tells him to get a grip.

As Mike rants about the situation, she tries to calm him. He bursts in on Finn and guesses he’s been “harpooned” again. Sheila says he learned the truth about his Li and was upset. “Jeez Louise Sheila! This is getting outta hand!” he says.

There’s no freaking way he’s sticking around. He takes off. When she returns to her son, he grabs her hand and repeats that she will pay for everything she’s done.

Liam and Wyatt are eating at restaurant. Wyatt tells him how amazing the fish tacos are and then asks how he’s holding up after all that’s happened to Steffy. Getting a beer, Liam tells him Steffy is in grief rehab. She must have realized it was too much.

They both blame Sheila for everything. Liam tells him about Mike. Ridge and Brooke knew who the guy was. He recaps the investigation and the lack of evidence.

The topic turns to their father. Wyatt worries that he’s been living alone too long. He’s getting philosophical and compassionate and it’s weird.

At his place, Bill brings Li some more water and offers her food. She’s silent. He wishes she would let him take her to a hospital but she refuses. As she sniffs at the water, he reminds her his name is Bill and tells her about his sons.

When he suggests Will could grow up to be a world-renowned doctor, she shudders. He guesses that struck a nerve and asks if she has a son. After she doesn’t say anything, he makes her a lettuce sandwich and orange juice.

His friend Dr. Jordan Armstrong (played by Vincent Irizarry) stops by. He sits down and asks if she was injured in an accident. She flashes back to driving off the pier in a flaming vehicle.

Jordan doesn’t have much luck. When he wanders over to Bill, he says she seems physically okay but has been traumatizes. He found some glass in her hair so she might have been in a car accident. “It must have been one hell of an ordeal,” he says.

Bill hasn’t had much luck getting any response. The doctor commends him for helping her. Bill doesn’t know who couldn’t feel for her. He’s sure there is more to this and wishes he knew who she is.

Liam calls him and Bill says it’s not a good time to talk. He’s been trying to help the woman he found in the alley. They are shocked he brought her home. His son urges him to be careful. Bill asks how Steffy is doing.

When Li hears Finn’s name, she jumps. Bill gets off the line and rushes over to her. She has flashbacks of Finn. He asks about her son again and offers to bring him to her. “What is your son’s name?” he asks. She tries but can’t say it.