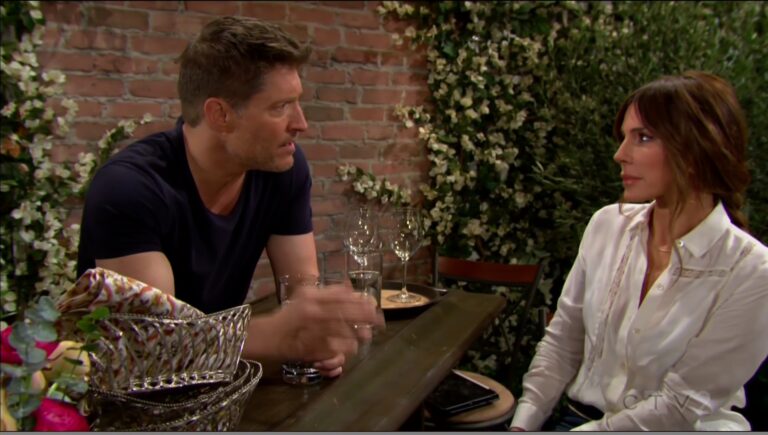 Brooke gets her man baby, Taylor and Deacon bond and Finn battles Sheila

Last week was all about reunions—Ridge and Brooke, Eric and Donna, and Quinn and Carter were all back together and in loved-up bliss.

This week, every story was stuck in recap mode with almost no story moving forward. Here’s hoping next week is better soap storytelling.

After the six longest months in recorded soap opera history, Brooke and Ridge finally got back together for the umpteenth time.

The only surprising thing was how unhappy Ridge seemed about it. Were we supposed to feel as glum as Ridge looked?

You would be right in suspecting that Ridge might be having a gastrointestinal moment from Donna’s pool party food with the strained look on his face every time he spoke.

I could barely stay awake during the scenes between Ridge and Brooke. If they didn’t have Taylor and Sheila to jaw about, what would have been left?#boldandbeautiful

Brooke was elated and called Ridge her rock, which was a bit odd considering his absence in her life. Ridge wasn’t there for Brooke and didn’t support her, so how was he a rock? Maybe it’s because he just sits there and says nothing, like a rock.

After Brooke poured her heart out, Ridge literally shrugged and said “I have to be here.” Ridge went on to say a lot of things about being back home, but none of them were “I love you.”

Is this romance? Stop telling us that Brooke and Ridge are destiny and show us!

Don’t talk about your feelings for your ex-wife with your current wife.

Later, Ridge steered the conversation to all things Taylor, who is a grown woman and can take care of herself. Brooke was surprisingly considerate, but couldn’t help but throw a little shade at her decades-long love rival.

Brooke: “Who can handle change more than Taylor?”

Funny, when pompous Ridge was with Taylor they talked about each other & their family. When he’s back with “destiny” Brooke, all he can talk about is Taylor. I can’t with this stupid man. #Ridgeisabigdummy #BoldandBeautiful

I am sick to death of watching all of these women be so overly understanding of the crummy way that these men treat them. Can we flip the script and have a woman dump a man because she can’t trust him?

Is that too much to ask for in a genre with a female target audience?

What should happen next? Bring back Brooke and Ridge’s son RJ as a troubled teen who gets mixed up with the wrong rich kids. Brooke and Ridge work together as a couple to prevent RJ from ruining his life.

The Taylor and Deacon scenes were the highlight of an otherwise forgettable week. Standing ovation to the person(s) who wrote these scenes. This is how to do plot recap without it coming off as recap.

After the humiliation of Ridge dumping her for Brooke once again, Taylor needed a drink. B&B routinely forgets character detail, so I was glad to see Taylor the recovering alcoholic enjoy a glass of tap water.

Taylor finally found some time in her busy schedule to thank Deacon for saving Steffy, which was long overdue. Surprisingly, the conversation cut much deeper than that.

Deacon, to Taylor: “If Brooke and Ridge are each other’s destiny, why is it such a struggle for those two to stay together?”

WOW! Is there a new writer in the room?!

Well, if you can’t confide in a pastor, I guess a Deacon will suffice… 🤔 #BoldandBeautiful pic.twitter.com/y2vPrbNoV8

Taylor and Deacon have a great rapport and have the potential to be unlikely friends. Deacon is the most decent guy on the show who’s not strapped to a bed, but he’s also obsessed with Brooke, so let’s stay in the friend zone.

Taylor, to Deacon: “You wouldn’t be the first person who needed counseling because of Brooke Logan.”

What should happen next? Ridge finds Deacon and Taylor just talking and totally loses his mind in front of Brooke. Someone finally says that Ridge is the problem.

Finn needs to wise up

Sheila shooting Steffy and Finn was gripping, can’t miss drama at the beginning. Now I dread seeing any of them on-screen because they just keep playing variations of the same scene.

There are just too many illogical plot points for me to care about Sheila’s shenanigans now. The death certificate with no body. Finn being moved to this room with no one noticing. No one knowing where Li is. The list goes on.

“I didn’t mean to hurt anyone,” wails the lady who shot two people and left them for dead.

The normally cool as a cucumber Sheila has got zero chill and has lost control of the situation. Finn, who can barely sit up and can’t walk, is insisting that Sheila let him go. Bickering ensues.

Helpless Finn lying in bed making demands of his psycho jailbreak mama is completely illogical. Finn is a smart doctor, so don’t make him dumb to fit the story.

What should happen next? Finn somehow goes from immobility to knocking out Sheila to hopping on a flight to Monaco to reunite with Steffy and the kids, bringing this story to an end.

Enough with the honey

Quinn and Carter are the only Bold and Beautiful couple I’m invested in at the moment. Relatively speaking, they are the most grounded, the most relatable and the sexiest of the few romantic pairings on B&B.

Carter is doing everything right for Quinn as she shared her frustrations about having to see Donna every day. He reassured Quinn that he’s on her side and then kissed her.

Carter should be giving his buddy Ridge some lessons on how to treat women.

I love how Carter rolls with it, he accepts Quinn unconditionally #Quarter #boldandbeautiful

Pam, Charlie and Donna having a cackle over the woman whose husband just left her was strange. Then the frisky geezers gave Donna a bag full of honey to welcome her back. Eww.

Was that supposed to be innuendo of some kind? This show has some twisted morality when it comes to whose behavior is acceptable.

This meeting of the Donna Forrester fan club was strictly fast-forward material. Pam, Charlie and Donna all seem like characters in a Jordan Peele horror film with their white bread humor and their lack of empathy.

Quinn: independent and holds a career.
Donna: slept her way to being a receptionist #BoldandBeautiful

Eric, to Quinn: “We had a beautiful marriage, wonderful memories.”

Say what? Did that all happen off-screen?

You can’t convince me that Eric doesn’t like the possibility of Quinn and Donna fighting in the office over his raggedy behind. Because most of the men on B&B specialize in pitting women against each other.

What will happen next? Quinn and Donna will provoke each other into fights over Eric in what is supposed to be funny but is just wasting storytelling time for #oldmanfantasy scenes.

I have big questions

Brooke’s on the verge of cracking the Sheila case but the LAPD hasn’t even run a background check on Mike Guthrie? Somebody please just Google “Guthrie Sheila Carter” and close the case in under a minute.

Mike is taking “this list of meds” from Sheila to get them… somewhere. Wouldn’t medications for someone in Finn’s debilitated only be available in hospital pharmacies?

I’m not a world-renowned psychiatrist, but when is someone (besides Bill) going to recognize that Ridge is just a selfish, indecisive man baby with unresolved mommy issues?

Feel free to read more of my opinions on B&B on SoapsSpoilers, which includes alternative storytelling.