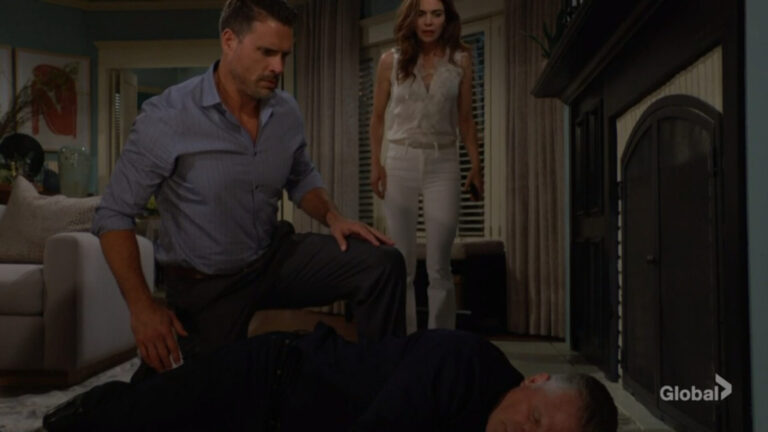 In this episode of CBS’ The Young and the Restless, Nick comes to his sister’s rescue but the cost is steep, Phyllis and Nikki come up with a plan, and Locke’s body is missing after presumed dead. In the previous episode, Adam refused to take Sally back, and Locke stalked Victoria.

In the windstorm, Nick knocks on Victoria’s door and then tries to call her, while inside, Ashland warns that there’s only one way for this to end. Vicky claims the caller is her security detail.

If she doesn’t answer, they will come for her. Locke says they will have to make it quick then. He say they were both powerhouses when they met.

It was inevitable that one of them had to fall because they both couldn’t be on  top. He shows her the ring she gifted him that was to represent their future, but says now he sees that it only resembles her lies and deception.

It’s a reminder of how cruel people can be. He accuses her of playing him. She snorts.

He knows he’s done nasty things too but thinks she’s worse because she became more vengeful.

He now thinks it was a mistake to save her from the fire.

If he’d let her die, he could still believe that she loved him.

She tells him she sees him. He’s not the great and powerful Locke. He’s nowhere near who her father is. He’s not even poor Bobby De Franco. He yells, “Then who am I?”

Vicky calls him sad and pathetic. She screams at him and he grabs her by the arms and shakes her.

Victoria scrambles out of his grip and gives him a shove before she turns around and snags a fire poker and threatens him with it.

Nick races in and Locke says he was invited inside.

He wasn’t doing anything but talking to his wife. Victoria yells that he’s not her husband and tells Nick that he grabbed her.

Nick starts yelling that everything Ashland has done has been with malice. He demands Locke leave but Locke isn’t going anywhere until he’s finished.

She runs into the kitchen. The men get in each other’s face, yelling, until Nick shoves him.

Locke shoves back and Nick punches Locke in the face. The man lands on the brick fireplace. He calls Locke’s name,but the man isn’t responsive. Victoria returns and Nick checks his pulse.

Nick says to call the cops. Now. She tries to get out of it but he reminds her that not going to the cops is worse.

Nikki arrives at Grand Phoenix while on a call with Victor, who worries Ashland is out for blood. Nikki asks him to check on their daughter and then disconnects. Phyllis appears, ready for the Disappearing Diane Club meeting.

Phyllis hopes her investigators came up with something, because “every day she’s in Genoa City, she sticks her talons in deeper.”

Nikki’s sorry but they didn’t find any skeletons.

Phyllis is upset. Nikki tells her that Ashley can’t make their meeting. She says not to worry about Diane using Allie because the girl can hold her own.

Phyllis thinks she should be “tarred and feathered.”

And now, Diane’s acting like she’s a superhero because of what happened with Ashland. Nikki’s incensed and calls Locke the gift that keeps on giving. Michael gushes over what she did as though she saved someone from a burning building.

Phyllis hates how Michael doesn’t see her. Nikki says they need a foolproof plan so Phyllis says the key may be her job at Marchetti. What if she failed? Nikki likes that idea.

Phyllis says they could orchestrate that she’s intentionally trying to sabotage the company.

Kyle and Summer will lose faith in her and want her gone.

Nikki knew she could count on Phyllis to come up with something underhanded.

Phyllis claims she’s better at it, at least this time. She details how she almost took a job at Marchetti but stayed for Jack.

Things were going well. She’ll do anything to take Diane down. They need someone on the inside.

Chelsea’s out so Nikki suggests Phyllis do it. Phyllis runs the hotel but considers something could be done.

Diane arrives at the Abbott manse to see Kyle. Jack lets her in, commenting on the windy weather which he calls a bad omen. He thanks her for helping protect their grandson from Ashland.

Diane tries to play it down but he urges her to just thank him. She was looking for Kyle for some work issues.

Since he’s not home, she asks for Jack’s help in how to impress Kyle and Summer and for advice on the job itself.

She’s rusty. Jack thinks that she could bluff her way through a number of scenarios.

They laugh and share a look when he offers to get her a drink and she says she’ll have what he’s having.

Something smooth and smokey. They drink together.

He reminds her that there will be training involved and then assumes she came to talk to him about this, not Kyle. She grins, making it appear as though he’s right.

Jack asks her to stay committed and honest and not worry about the job. Things will come together. She laughs at the word ‘honesty’. He knows that’ll be hard for her.

She sighs. She hopes people will stop throwing her history in her face. “Old habits die hard,” he says.

They reminisce a little and she asks if he resents her. He calls it a waste.

She’s grateful but he says it’s not for her benefit. She knows but hopes they can be friends one day. What does he think of that? “You don’t wanna know,” he says. Later, he’s let her peek in on their grandson.

She likes him using that phrase. They bond a little and she takes off. The wind let up and Jack comments that maybe there’s not trouble after all.

Chance pops into Crimson Lights for coffee. He’ll be working late. They comment on the wind and he’s sorry to remind her of the inclement weather that Rey died in. She’s fine.

He’s been on their minds. He takes a call from Victoria to tells him an accident happened at her house with Ashland. He’ll be right over.

They disconnect and she heads outside where Nick is getting air.

The wind whips her hair around as her brother tells her he didn’t want Locke to die.

A dog barks somewhere and he goes to walk it off.

She goes after him and tells him he saved her life. She knew her ex wanted her dead. She tells him a little of their discussion on how Locke wished her dead.

He’s glad he could be there but he took his life and there’s no changing that. He’s overcome. Victoria cries and says she knows. She’ll do everything to help him. They embrace and go back to the house.

Chance isn’t there so they head in.

The doors are banging and Nick closes them and then goes to look at Locke.

He’s shocked to find Locke missing and blood on the floor.