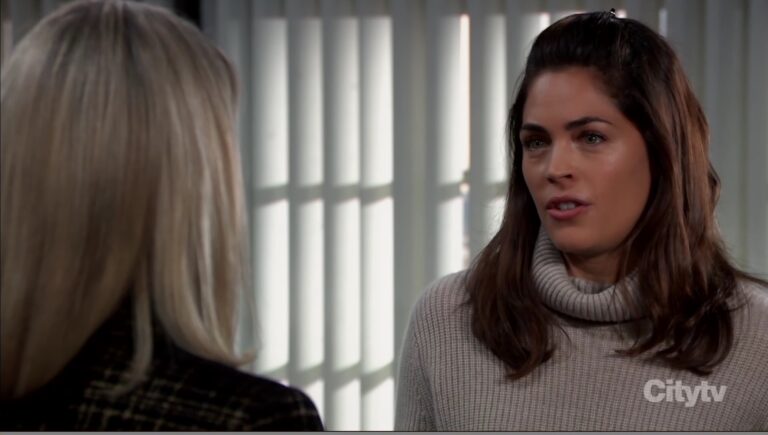 SoapsSpoilers’ General Hospital recap for the Monday, January 17, 2022 episode. Today, Sonny asks Carly to come home, Britt has a suggestion for Nina to take what she wants, and Brick is concerned that the business is going south with Sonny’s personal issues bleeding into work. We also have Friday’s GH recap where Drew offered a shoulder to Carly, Laura attempted a family reconciliation and Michael refused to forgive Sonny.

Curtis welcomes Laura back at Metro Court. They catch up and he talks about being shot by Cyrus. Laura shares that he claims he’s found God and changed. Curtis doubts he could change.

Talk gets muddled when Curtis’ words seem mores as though he’s talking about someone else. He tells her he’s just a hard working club owner.

Laura’s glad to hear that she and Portia are doing well and she admits Kevin told her how well TJ’s doing at the hospital. Then what’s going on with him? He tells her about Marshall coming to town and who he is and that he’d like to reconnect. TJ’s all for it.

Laura assumes it’s because he wasn’t hurt by this man. Is Curtis ready to reunite with him? Curtis talks about him getting involved with dangerous people and going off the radar.

He can relate. Laura thinks that if his story is true, he was keeping his family safe. She think she has to face that he hurt him out of love. Curtis grimaces. Marshall warned him against digging into his past though he claims that things have calmed down.

Curtis isn’t sure what to believe or if this man is telling the truth. Laura assumes that despite his doubts, he does want a relationship with his father. She asks him to let her know how it goes before she heads out.

Marshall appears at General Hospital, glad to see Epiphany. He hurt his wrist so she takes a look at it. When she drops a file, he picks it up with the hand that’s supposedly hurt. She purses her lips and tells him not to waste her time faking.

Marshall admits his hand is fine. He’s there to talk about making sweet music at Christmas. Epiphany reminds him he told her he doesn’t want a social life. He thought she was mad at him because he mistakenly called her ‘doctor’.

He apologizes. She admits she did have dreams of becoming a doctor when she was younger. She worked as a vet in order to assist her. He knows that’s dedication and asks why she didn’t follow her dream. “Life happened,” she says.

Sometimes things don’t go the way you planned them to. He doesn’t think it’s too late for her. She can start with baby steps. “By joining your band,” she says. They laugh and he invites her for dinner.

He misstated before, when he said he didn’t want a social life. He asks if it’s not too late to start over and Epiphany grins and shakes her head. She asks how he feels about prime rib grilled to perfection. They banter over food and she invites him to dinner after her shift.

At the gym, Drew and Michael spar. Drew thinks about reclaiming his ELQ shares. Michael thinks he should be prepared for a fight.

Talk turns to Scout and how she’s doing. He talks about Sam moving on with Dante. They agree he’s a good guy. Drew shrugs that good guys finish last.

Michael wants to prove him otherwise. Drew knows how well Michael’s doing with Aurora Media and doesn’t want to take that from him.

Michael talks about how Drew should keep a distance from Sonny. They’ve had their differences. He tells Drew that his dad defended Nina in court even though she did so much damage to his family. Drew sighs. Carly may be down but she’s not out.

Nina flashes to Carly’s visit at work. Britt shows up. She heard about the bombshell that was dropped at her hearing. Nina says she’s unscathed but Britt knows some scrapes show up on the inside.

Nina assures she’s fine. Britt knows she can handle it, causing Nina to thank her for not seeing her as a victim. She asks where she and Sonny are. Nina doesn’t respond but asks what’s going on.

Britt still thinks she has pull because they have feelings for one another. Nina shouts that it doesn’t matter. He loves Carly and Nina doesn’t want to be the heartless home wrecking cliche.

From what Britt hears, they’re not together and she won’t take no for an answer. She’ll reach out to Sonny on her own.

At home, Carly sits with the kids and promises that though she’s working so much, she’ll be with them as much as possible. Sonny tells her they’re going sledding.

The girls’ want her to come but she begs off. They go find Pilar and Sonny tells her they’d all be happier if she stayed home. She still needs time to herself to figure things out. Sonny doesn’t think that sleeping in separate beds will help them work this out.

She asks if he refilled his prescription and he recalls throwing his pills across the room. He tells her he’s on it but he won’t give up on his marriage. Will she? He asks her to trust in her feelings for him. She talks about knowing how she feels about him when Brick turns up. He can see he’s interrupting.

Carly hugs him and tells him it’s good to see him. She leaves them to talk business. Once she’s gone, Brick asks what’s going on between them. Sonny won’t say much so Brick talks about business going south. There’s a threat on the west coast.

Sonny muses, “Players come and go.” Brick says this dude took out one of his regulars and he’s working on a name. Sonny thinks it may be someone filling Cyrus’ shoes. He’s angry that he has a lot on his mind.

Brick knows his problem lies with having one too many women in his life. He’s in town for the next few days and invites him out with Carly. Sonny assumes that Carly won’t make it. Sonny’s phone rings and Avery answers.

She tells Britt that her parents aren’t home. Britt assumes that means that Carly’s moved out.

At the hotel, Carly sits with Diane and wants to talk to her as a friend. Diane is sorry to hear about what happened at the hearing. Carly wonders if staying in a broken marriage is the right thing to do for Avery and Donna.

Diane understands that Sonny and Nina had a relationship in Nixon Falls and he’s continuing to protect her here in Port Charles. Diane asks her to be certain before she makes any changes.