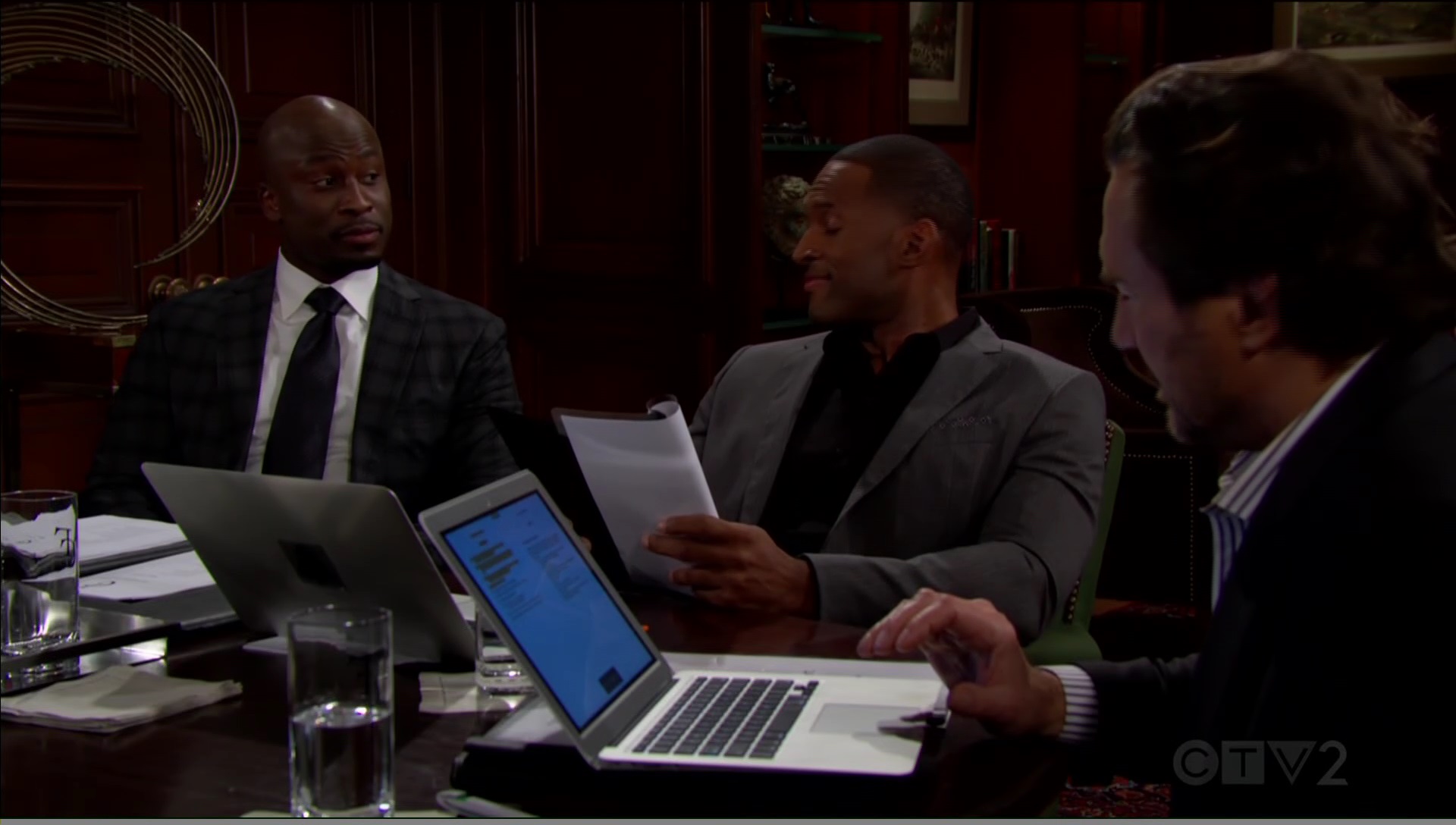 Soaps Spoilers has the Bold and the Beautiful comings and goings for fall and winter.

Casting for B&B will be updated with airdates when they become available. Readers can find the Bold and Beautiful spoilers for this and next week updated weekly and early. Stay in tune with what’s coming on the show by following our daily B&B recaps which go live at 2:00 PM EST. Find the last few months’ worth of comings and goings which included Kiara Barnes’ exit, Xavier Prather’s appearance from Big Brother, and Ted King’s return among others.

Former NFL player and commentator, host of American Ninja Warrior, and co-host of The Talk, Akbar Gbajabiamila, will be seen on Bold and the Beautiful January 18 as a work confidant of Carter’s (Lawrence Saint-Victor) named Max.

Watch for Alfonso Caballero to appear on B&B. He’ll be in scenes on January 10 with Katherine Kelly Lang (Brooke). Caballero plays a meeting leader named Bryan.

Model Alexis Gaube is back again as Andi, the Forrester model on Bold and Beautiful. She’ll be seen January 14.

Cassandra Creech will be making an appearance on Bold and the Beautiful as Dr. Grace Buckingham, according to Soap Opera Digest. Grace is Paris Buckingham’s mother. For those who remember her but can’t place her, Creech was known as Keisha/Diane on Days of our Lives. She also portrayed Denise Maynard on As the World Turns, and Dana Kramer on Another World.

Taylor has a new assistant on Bold and the Beautiful. Erika Medina is seen January 3. The character name has yet to be given out.

Viewers can expect to see Abdur Wyatt as a bartender December 29 at Il Giardino.

Shireen Crutchfield will return to Bold and Beautiful as Sequoyah as a model that works for Forrester Creations on December 21. Crutchfield is a model and actress.  She was seen on Dark Angel as Jace, Jane the Virgin as Mom, and was last seen as Sequoyah on B&B July 29, 2021.

River Davidson (Beth), Avalon and Collette Gray (Kelly), Piper Harriot (Hayes), and Henry Joseph Samiri (Douglas) return to Bold and the Beautiful for the holidays. Viewers will start to see the kids on December 23.

Emma Smith will make another appearance on Bold and the Beautiful on December 3 as a Forrester Creations model, Charlene. Smith is a real-life model who has appeared in Maxim Magazine. Viewers will remember seeing her in the September 1 episode of B&B. Smith is represented by Axle Management and has a large following on Instagram and Tik Tok. In November, folks watched Alexis Gaube appear as a Forrester model. It looks as though the show is finally getting back to their fashion roots. Maybe we’ll get a fashion show at some point.

Recast alert! The role of Dr. Taylor Hayes has been recast, according to EW, and with Krista Allen. Allen is no stranger to soaps, in fact, she played Shelley on Bold and Beautiful in 1995.  The actress also portrayed Billie Reed from 1996-1999 on Days of our Lives. Allen will begin taping the role of Taylor on October 28 and her first airdate is December 10. Hunter Tylo originated the role in 1990 and played the character off and on through until 2019. Like Allen, Tylo also had a small role on Days as Marina Toscano from 1989-1990. For those who forget, Taylor’s absence has been explained as her being doing missionary work in another country. Viewers have wanted Steffy’s mother to return especially since so much has happened to Steffy and Thomas that made their mother’s absence difficult to understand.

According to Bradley Bell, Darin Brooks was supposed to be back at Bold and Beautiful as Wyatt Spencer along with Katrina Bowden as Flo Logan. This couple hasn’t been seen since July and Bell stated that they were “still very much a part of the makeup of the show.” He said they’d be seen in upcoming storylines that will air later this year, though the couple’s names have been removed from the credits. There is no word on their next airdates.

Naomi Matsuda returns to B&B as Dr. Li Finnegan on November 16. Li is in for a big shocker when she makes her return. Look for the fallout from that to last for some time to come. Folks haven’t seen much of Matsuda and social media has been outspoken about how much they like the actress and Li’s strength since her first August 2 airdate on the CBS soap. Matsuda has been busy beyond B&B. She recently finished portraying a Japanese woman in Bullet Train, which is in post-production, she worked on All American as a doctor this year, in addition to playing Principal Susan Maeda in The Uncanny, which is also in post-production.

Chance Confesses He Lied to Abby, Nikki Confronts Ashland For Making Decisions Behind Victoria’s Back & Phyllis Gets an Offer at Marchetti