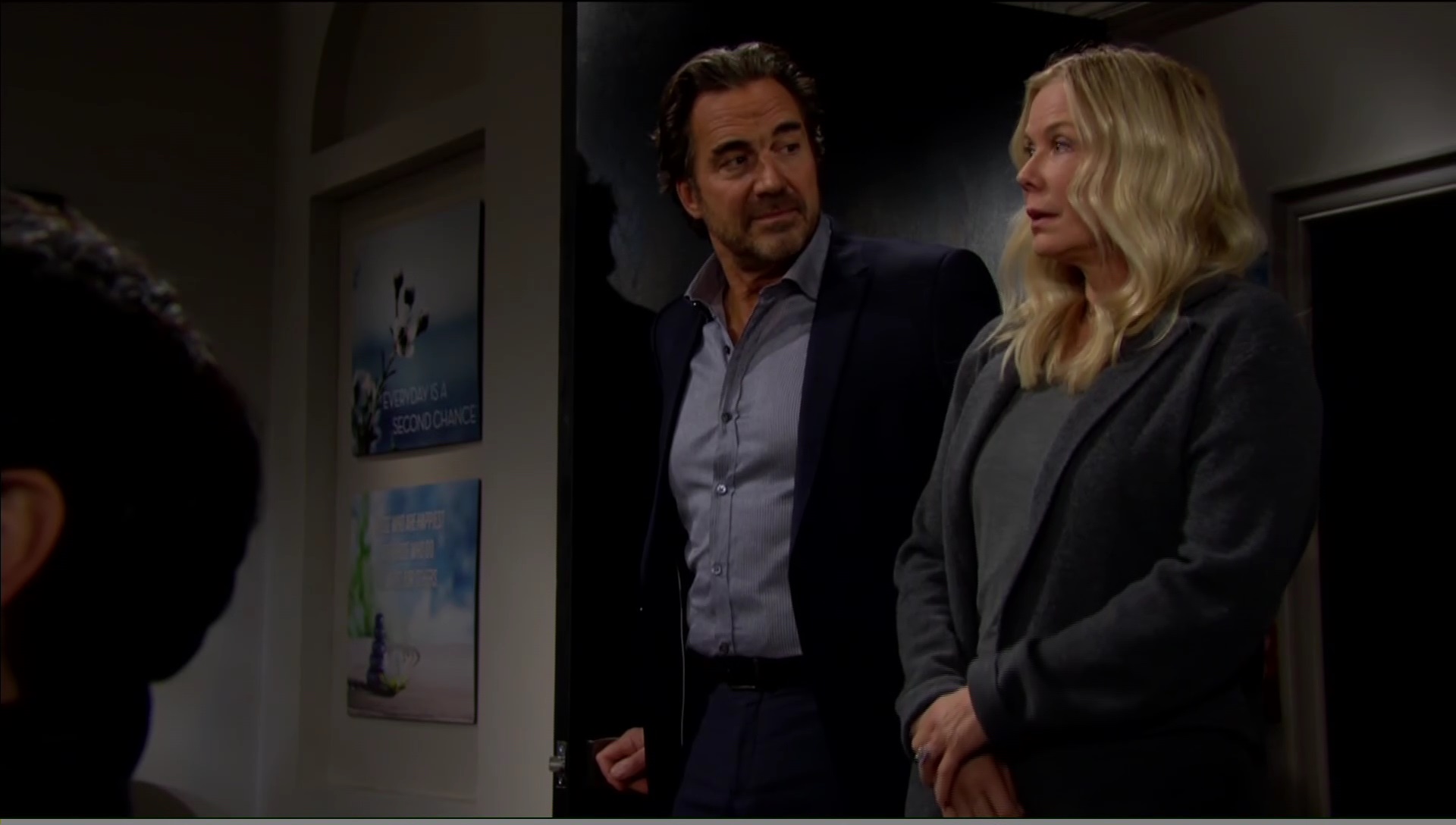 In the Friday, January 7, 2022, full episode recap of CBS’ Bold and the Beautiful, Hope and Ridge give Brooke support after falling off the wagon, while Steffy and Taylor wonder why Brooke had an issue on New Year’s. We also have Thursday’s B&B recap where Hope hinted to Steffy that something happened with Brooke on New Year’s, and Brooke told Ridge she relapsed.

At home, Brooke cries and feels guilty about falling back into her old habits. “No guilt, alcoholism is a disease,” Hope tells her mama. Ridge agrees. Brooke just can’t figure out what drove her to drink. Ridge tells her it doesn’t matter where it came from.

They’ll support her to fight it. Hope agrees. It’s one day at a time. Ridge asks if Deacon has something to do with it. Brooke wonders why he’d ask that. Hope blames herself. Maybe she added new stresses to her plate.

Both women insist Deacon was fine. Brooke needs to go to a meeting as soon as possible. Ridge offers to go with her. She tells him he doesn’t need to.

At Forrester Creations, Steffy tells Ridge that she had a strange vibe from Hope about Brooke, who was affected by Ridge not being home for New Year’s. They ponder at length what the issue was. Ridge’s absence clearly triggered something in Brooke.

Steffy’s glad her mom is back because she’s sure Brooke will implode and that Ridge will need someone to talk to.

At the cabin, Bill tells Liam that his new assistant shopped for the kids this year. He doesn’t even know her name. Liam teases his father and Douglas appears. “Oh hi, Dollar Bill.”

He heads outside to play and Bill tells his son that they haven’t had much one-on-one time and wants to make time for him. He asks how things are between his son and Hope now that “that convict Deacon Sharpe is back in her life.”

Liam says they’re okay but it isn’t easy. “How could it be?” Bill snipes. She’ll learn the hard way ‘yet again’ that wherever “that two-bit conman goes, trouble follows.”

Hope arrives home as Bill talks about her “degenerate father.” Bill is about to say something when Hope says not to worry. She understands his feelings. Bill insists he’s there for both of them when the inevitable happens.

Bill goes and Hope tells Liam about her mother’s relapse and how she blames herself for bringing Deacon into their lives. She knows her mom has been hiding something since New Year’s Eve. She blames herself and Liam insists this is not about her.

There was nothing she could have done to stop this. They’re there for Brooke for whatever she needs. Hope admits Ridge is taking her to a meeting right now. Douglas wanders in to see Hope crying. He asks if she’s okay. She says it’s about Grandma. Douglas smiles and tells her he saw Grandma kissing Santa Claus. Liam tells his son this isn’t the right time to discuss that.

Ridge holds Brooke’s hand to an AA meeting. “You got this,” he says to her as she looks around, clearly not at ease. A team leader named Bryan (Alfonso Caballero) shares his story about wanting to drink at Christmas, but proudly tells the room he held on because of his sponsor.

Brooke gets up later and introduces herself as Brooke. “I’m an alcoholic,” she reveals. She introduces Ridge who vows to see his wife through this. Bryan asks if she’s gone through it before. “Yeah, I’ve had my moments,” she admits. She’s gone to meetings here and there.

Brooke shares that she’s been in recovery for a while and this came out of nowhere. Everything was fine. She details that she was drinking non-alcoholic champagne and calls it a normal holiday. She says something switched inside her and she felt the need to drink.

She has no idea where it came from. She talks about taking a slug of vodka and it was “almost like I’d been already drinking.” Bryan asks if she was alone. She flashes to drinking with Deacon and looks around the room. “Alone?”