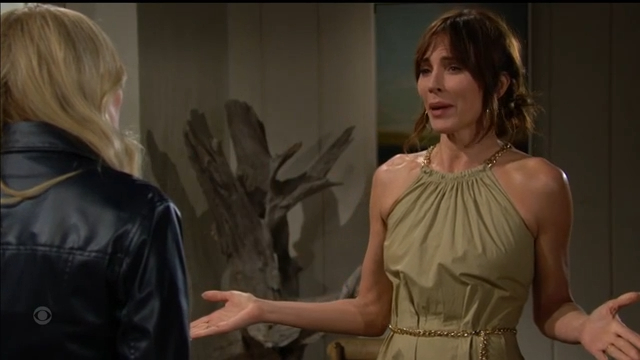 It was a rough week to be a B&B fan with a good memory of the complicated and often contradictory history of this show. So let’s review and get us all on the same page.

According to dialogue this week, Ridge is the miserable and long-suffering husband of Brooke, who has broken her marriage vows repeatedly but most notably with his father Eric and his brother Thorne, while Taylor is the saintly and patient other woman who makes Ridge feel his best self and also enjoys a cocktail.

As we know, Brooke has never intentionally broken her vows to Ridge. She thought Ridge was dead when she boned his brother Nick, so that’s a freebie. Sex with a costumed Oliver when she thought he was Ridge, who wore the same costume, was forgiven by Ridge since it was accidental.

Ridge has cheated on both Brooke and Taylor over the years, while Taylor used to be an alcoholic who killed Darla and shot Bill. DRAMA!

So why ignore this meaty history in favor of a fabricated past that makes Brooke an “ultra-slut,” Ridge a dullard who can’t make up his mind and Taylor as the virtuous second choice?

Honestly, I have no idea why they’re doing this. What’s your theory?

Is this hypocrisy or rewriting history? Maybe both.

Hypocrisy is great in soap operas because it causes conflict between characters, it reminds loyal viewers of show history (we always love that) and it’s relatable to real life.

We’ve all been hypocrites because we’re all human.

But when a character’s self-serving version of the truth goes unchallenged and repeated, I assume it’s an intentional rewrite to manipulate viewers.

In this case, rewriting Brooke as Ridge’s cheating wife makes it seem as though Taylor is valiantly saving Ridge from an unhappy marriage he can’t escape from.

Am I overthinking or do you see it, too?

Steffy needs to dial it down.

Taylor’s ride or die ally is always her daughter Steffy. The family dynamic between them, when they’re written true to history, is delightful.

Steffy has always been a bossy boots who doesn’t take no for an answer. I like that because she’s a successful businesswoman and OG Stephanie’s granddaughter. Steffy’s own scheming to protect the Forrester family would do her granny proud.

But it’s gone too far. The embarrassing and innuendo-plagued parent-trapping moments added to the cringe “Hope, your mom is a whore and my mom is a saint” scenes are a toxic combination of lazy writing and a shocking lack of self-awareness.

Steffy is no angel and that’s awesome! She seems like the kind of woman who would own her past and not be ashamed of it because it made her the woman she is today. Brava!

Steffy as a conservative family values bully is out of character and does not work.

JMW deserves better than to be stuck talking about a triangle that’s gone on for 30 years. Steffy’s husband came back from the dead but she’s barely in scenes with him.#boldandbeautiful

Ridge needs to defend his wife or start packing.

If someone talked about my mom the way Steffy talks about Brooke, that person would get popped in the mouth. So why is Steffy being presented as some kind of heroine for slut-shaming Brooke about things Brooke never actually did?

Even if these new accusations that Brooke stepped out on Ridge are now going to be a rewritten truth, it’s not like Steffy is a stranger to a paternity test.

Compassion for Brooke instead of the usual full front assault from Steffy would be an unexpected twist.

Most of all, I never want to see another scene where Steffy pimps her mother and delivers rewritten history facts.

I’m a Brooke fan as much as I’m a Taylor fan, so I had high hopes for the return of Dr. Hayes to Bold and Beautiful. I figured that something new had to happen for both the character and her rivalry with Brooke.

The show was on the right track with Taylor’s amusing if somewhat implausible connection to Sheila. Then we saw a connection with Deacon that intrigued fans and could have led to a romance, but that went kaput, too.

Since both of those connections have broken, there’s not a whole lot happening for Doc outside of sniffing after Ridge and propping Thomas.

Taylor and Ridge need to acknowledge their own pasts.

The latest upcycle of the Tridge relationship could still work if Taylor and Ridge started speaking honestly about their past and their mistakes and their other loves, vowing to each other that they were smarter now and would make this new relationship work.

Give us some real romance!

Ridge has been a cheater since before he met Taylor, and Taylor had slept with almost all of Brooke’s men (as well as Brooke’s brother Storm and son), so why would the writers ignore all that story potential?

Instead of acknowledging their tarnished histories and spinning new stories from it, Taylor is being wiped clean to put us right back where we were in 1990. BORING!

Tridge reconnecting as two mature people with scars on their hearts, struggling to trust and love again would be an epic romance and would make me root for their paring.

Dollar Bill, to Brooke: “I should have called first. Is Grumpy here?”

There seems to be an uptick in the soap fan social media community of tagging actors in posts and saying nasty things about them. Why do people do this? It’s tacky, it’s ungrateful and it’s sad.

Actors are just people doing a job for a paycheck, like most of us do. They spend their days being told what to do, what to say and how to say it so they can pay the bills and keep us entertained.

So cut them some slack. Concentrate your efforts on the soap stars you enjoy.

I’m sure they would love to hear from you.

What do you think? Will Steffy remember her own heaux past? Will Brooke kick Ridge to the curb?

Is Taylor too broken to fix?