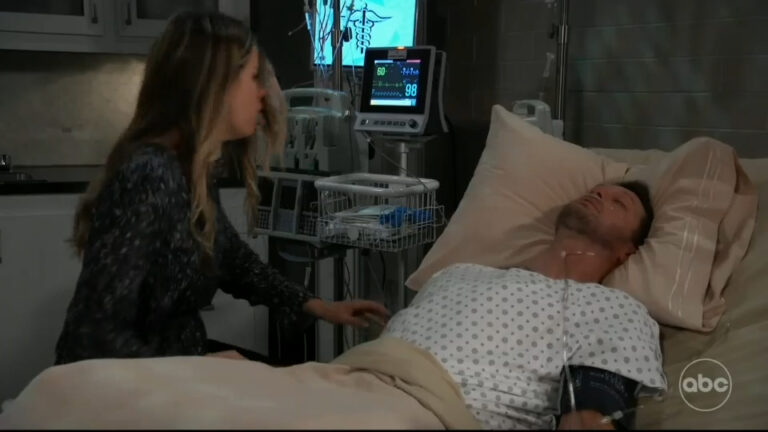 General Hospital recap for Monday, September 19, 2022. In today’s GH episode, Brando seizes, Joss confronts a man who she thinks is stalking her, and Curtis asks Jordan if she didn’t file divorce papers on purpose.

We also have Thursday’s GH recap where Dante became suspicious of Dex and Brad encouraged Britt to give Cody another chance.

At the hospital, Sonny puts on the pressure for Jordan to find out who hooked Brando.

In his room, Sasha is happy that Brando’s awake. His throat is sore but he’s happy to be alive.

Sasha goes to tell Nina and the women embrace, thrilled. Nina rushed to tell Sonny and Jordan runs to Brando’s room for his statement.

In his office, Kevin listens to Liz admit that her problem since checking out of ShadyBrooke got worse. She tells him she can’t account for the time she was alone. “I could have been doing anything,” she reveals, grimacing.

She admits each time they argue, she’s had either a memory or a blackout.

She isn’t sure what the memory is about but says it has to do with her father. She’s young in the memory and sees a woman. When she reaches out, she’s told to stay away from her father.

Liz asked her not to talk about her father. She recalls the dialogue: “Let’s see what happens when  you do.”

She tells Kevin she confronts the woman about her father but isn’t sure what it’s about. She wonders why this memory is coming back to her right now. He offers to hypnotize her. She’s in.

He puts her under immediately and takes her to the stairwell where he tells her to step through the door. She sees the same imagery with the woman she grabs and argues with. Kevin talks her through it and she sees the woman laying on the floor and her standing over her.

In her own office, Portia and Curtis discuss the secrets that Jordan kept from him during their marriage. Portia wonders if they would still be together if Jordan was honest.

Curtis says it has no bearing on where their lives are now.

The basis of a relationship is honesty. She cries and tells him he’s right. He regrets how things went down but he doesn’t want to be with Jordan. He loves Portia. They can’t wait to marry.

She asks if Jordan knows they’re over and then goes off to check on Brando.

At the pool, Joss and Trina stare at Dex. She brings him his sunglasses as he sunbathes.

She tried to get them to him yesterday. She admits she barely missed watching Brando get stabbed.

He heard about that and is sorry. He was questioned by Dante and knows it must have been scary for her.

He didn’t see a thing but if he had, he’d have intervened. She feels helpless.

She goes to talk with Trina after seeing a man in dark sunglasses staring at her.

She asks Trina if the man is watching and Trina notes that he is. Joss approaches him and challenges him. Has he been watching her? The man plays it cool. He claims he has no idea what she means.

He takes the man aside and tells him he was supposed to be discrete while he watched Joss.

It turns out that the man’s guarding Joss. Dex offers to take this shift, though the man comments that Dex has been watching her all night. He takes off and Joss confronts Dex when he returns.

Back at GH, Finn goes to examine Brando.

Jordan interrupts, wanting a statement. She says the sooner she does this, the quicker they get this perp off the streets. Brando coughs and Finn does an examination.

In the waiting room, Alexis and Gregory talk about the attack and the Invader’s coverage.

He found it commendable that she didn’t sensationalize it. Alexis knows they’re going through enough.

She wouldn’t turn their stories into sideshows. He asks for her to accompany him to a seminar on the ethics in journalism.

She agrees to it. He looks forward to the debates they’ll have.

Elsewhere, Sonny tells Jordan he won’t be left in the dark about Brando’s case. She asks him not to tell anyone that Ava and Brando were attacked with a hook.

He only agrees not to tell anyone outside of his family. Finn appears and lets Jordan into Brando’s room. Sasha goes to text Gladys while Jordan asks outright if he knows who attacked him. He recounts what happened but didn’t see their face.

He’s not even sure if it was a man or woman. Portia appears and Brando recalls a jingling sound, like bracelets clinking against each other. He thinks they were wearing jewelry.

In the waiting room, Sasha and Nina relax a little. Sasha says she didn’t like being under Brando’s thumb with the conservatorship but now she wouldn’t know what to do without him.

Nina offers a shoulder to cry on if she needs it.

Sasha heads back to see her husband and Portia allows Sonny in. Brando’s happy that Sonny brought him into the family. He’s glad to be a part of it. Sonny calls him family.

By the elevators, Finn appears to Alexis and Gregory. He’s sorry he’s late.

He was called into a consult with Brando and tells them he’s awake, alert and in stable condition, but he learned that the attack was caused by a hook. Alexis and Gregory gasp in horror. They think this will escalate.

Elsewhere, Jordan finds Curtis. She wants to clear the air. He asks if she hung on to those divorce papers or if was it an accident that they were never filed.

Jordan’s pissed. Why would she do that?

He asks if she thought he’d change his mind about the divorce and come back to her.

Once he’s alone, Sonny takes a call from Dex with an update about the guard. Sonny asks him to watch over Joss and lets him know Brando’s awake. Dex is glad to hear. He’ll keep an eye on things.

Nina arrives and Sonny tells her he’s beefing up security. Nina gets it. Sonny worried she’ll have second thoughts about him but he has to be careful. Nina understands. They kiss.

In Brando’s room, Sasha promises she’ll do all she can to get back on her feet so he doesn’t worry. He vows to get well soon to be there for her. She talks about her idea to take a vacation for their first anniversary.

He likes it. They’ll go somewhere isolated and “celebrate” each other all day and all night. He can’t wait for March 10th.

They kiss and he starts coughing. He can’t stop. Blood comes out of his mouth and he begins to seize. Sasha stands over him in shock.