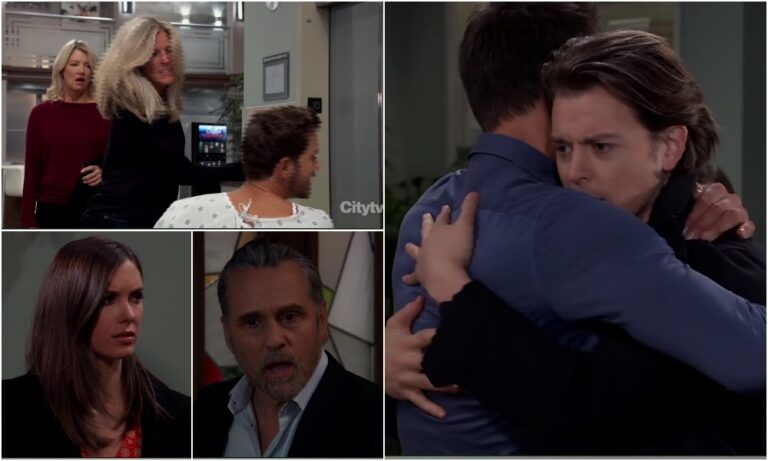 SoapsSpoilers’ General Hospital recap for Monday, December 6, 2021 episode. Recaps go live at approximately 3:00 PM EST. Today,  . We also have Friday’s GH recap where Nina was rocked to the core when Peter exposed her secret, and Valentin said a tearful goodbye to Bailey.

At the safe house, the guards hear a loud commotion and voices yelling inside. They rush into the house guns drawn and find Laura and her brother Martin playing video games. They apologize for the confusion. A guard chastises them and urges them to play Crazy 8s. “I scream at those too,” Laura says.

The men go and Martin wonders if they’ve eliminated the threat against them. Laura isn’t so sure Cyrus is no longer a threat. Martin’s grateful for the chance to get to know her. They talk about spending time together in the open as they play cards.

If they don’t make it back for the holidays, Martin suggests a big old fashioned dinner. Agent Silva returns. She thanks him for caring for them. He hands them the newspapers. He asks if the name Victor Cassadine means anything to her. She learns he’s in Port Charles and tells Martin he’s Valentin’s uncle through marriage. She stammers and tells him that Victor’s havoc is too long for her to list. He’s as dangerous as Cyrus. She’s ready to pack up. She needs to go. He refuses to let her. It’s too dangerous. Later, a fake cleaning lady appears. Silva won’t let her in so she leaves the supplies and goes. Later, the woman is in her car when she dons gloves and calls someone. She asks what her next move is. 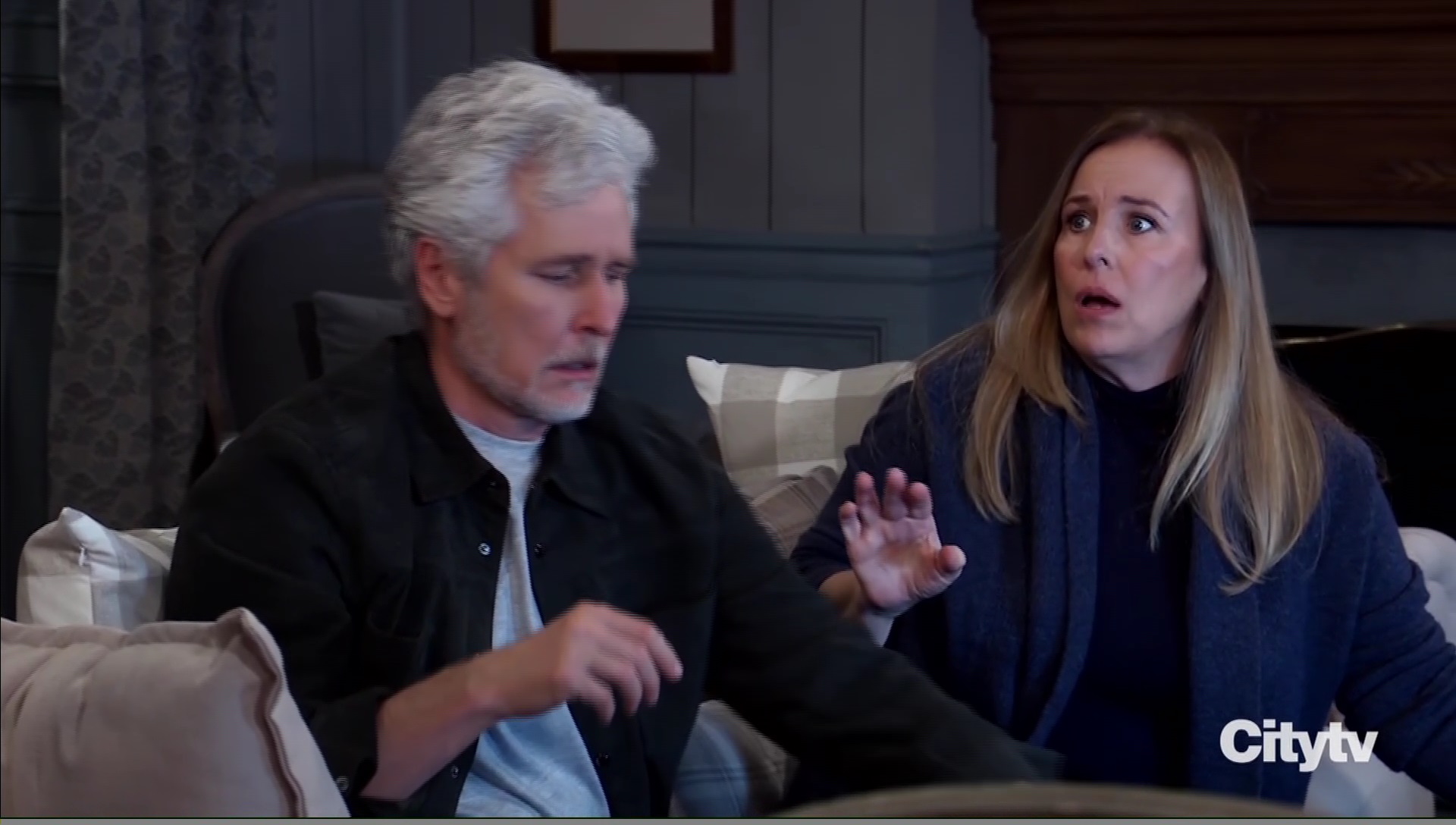 ABCAt the hospital, Peter continues taunting Nina. He thought Carly would have run Nina out on a rail by now. He threatens to tell Carly about her secret just as she shows up. She questions Peter.

He’s not forthcoming. Carly asks the guard for a minute alone. He turns his back and Peter says, “Just long enough to share a moment for the dearly departed Jason Morgan.” Carly slaps him across the face. Nina looks stunned.

The guard tells her she only asked for a word but Carly says sometimes more than a word is necessary. Nina steps in and rails on Peter and he tells her to be careful. Sometimes things that happen in Nixon Falls don’t stay in Nixon Falls. Nina lies and says he’s just looking for revenge. He’s got nothing on her. He hates her. Carly asks why she called Obrecht when Peter saw her in Nixon Falls, instead of the cops. She says he threatened James. If he couldn’t find his own daughter.

The guard wheels Peter away and Carly yells at Nina, asking what else she pulled while she was there.

Elsewhere, Britt gives Sonny his condolences. “You know how life is,” he says. He asks how long before Brando and Sasha can bring Liam home. She says soon. Sonny thinks she’s changed. He can see why she was special to Jason. “Yeah, so special he chose another woman over her.” He tells her that Jason loved them in his own way.

She’s surprised to hear him say that. He admits some would say he’s gone through his own changes. He appreciated her saving Jason that night. She wishes she could have saved him on Cassadine Island. He does too and if she had the chance, she knows she would have done all she could. He walks with her to her office, “Cause you never know if there’s another Boogeyman out there.” They laugh.

By the elevator, Nina admits to Carly that Peter also blackmailed her with threats and pain to buy her silence. “What does Peter have on you?” Carly asks as Britt and Sonny appear. Sonny closes his eyes, looking concerned. Nina lies that he knew she was keeping Sonny being alive a secret. Sonny interferes and Carly keeps yelling. If she would have turned in Peter, he would have been locked up ages ago. And Jason would have still been alive. Nina walks off crying and Carly yells that Sonny can’t defend her.

Sonny says, “You have a right to be angry but Jason’s death pushed you over the edge.” She tells him of course she’s angry. He was her best friend. “He was your best friend,” she argues. He isn’t telling her she shouldn’t be angry but he is channelling his anger into making sure whoever is responsible is caught. Carly asks if he thinks her reaction is inappropriate? I mean, it’s no less appropriate to how I reacted when you were dead.”

Sonny says, “Right. Your husband.” He’s not saying her grieving is wrong. Carly’s confused. She asks him to clarify but Nina texts to ask him to meet in the chapel. Carly takes off and Sonny goes to the chapel. Britt snags Carly. They talk about body pillows.

At the Quartermaine mansion, Drew tries to catch up after learning Bailey is Chase’s son. They tell him it’s a long story. Willow wanders in. “Drew?” Michael appears moments later, shocked to see Drew. Drew embraces him. Michael has many questions about where he’s been.

Everyone gives them space and Drew asks if he and Willow are married. Michael calls it complicated. They were married, and they’ve a son, but now they’re back together. Drew has bad news for him about Jason. “He was trapped in a tunnel on Cassadine Island. There was a cave in and it’s unlikely he survived,” Drew shares. Michael looks stricken but thinks if anyone can defy the odds, it’s Jason. Drew hates being the bearer of such bad news. He admits he and Jason started to bond at the end.

Drew needs to call his dad. He muses that he’d finally gotten past the impulse to call him and now he has to make a check-in call to make sure his family is okay because Jason’s not there. “How can Jason not be here anymore?”

Outside, the nanny brings Bailey out and Willow’s confused. Why did the nanny call him Bailey’s father. They lie and tell Willow that it’s true. He just learned that Bailey is his. Brook Lynn tells Willow she kept it from him to get her ELQ shares back from Valentin. Willow didn’t know they had sex. He tells her just that one time. Brook Lynn calls them co-parents. “That’s it.” Willow looks down. “Like Michael and I were.” Later, Drew holds Bailey and he and Brook Lynn talk about what to do with Peter.

GH brings Kristina Back to GH

Back at home, Nik gives Ava keys to his Porsche since she can’t find her own and she takes off. The doorbell rings and he answers it to Victor. Ava returns after finding her own keys and sees the men together. Victor introduces himself and Nik sings her praises. Victor asks her to call him Uncle Victor. They’re family after all. He understands that he has her to thank for his freedom.

Nik’s surprised. Ava cringes as she admits how she shared some information with the WSB. He has some information for her. He thinks he should tell her alone since it’s confidential but Ava insists Nik should stay. They talk about Hayden and how Victor protected him. “What have you done to Hayden?” Nikolas asks.

“Word of advice? Don’t ask questions you don’t want the answers to.” He talks about giving Peter access to his resources and Peter gave him something in return. Ava asks what that was. He doesn’t say and he hopes it doesn’t become a problem between them. He makes veiled threats and goes. Nik says they’ll have to send him packing. She thinks they should bide their time. No standoffs or showdowns. When Victor goes down, he’ll drag them with him.

Willow and Michael arrive at the hospital. In the chapel, Nina warns that Peter is a loose cannon and about to tell their secret. Sonny say the timing is bad. He tells Nina she’s not responsible for Jason’s death. She knows but her bad choices have a ripple effect. She cries that if she has to say sorry for the rest of her life, she will. He tells her she doesn’t need to do that. Willow walks up as he says, “Nobody needs to know.” Whatever happened between them in Nixon Falls has to come from him. “And it will.” Nina agrees  and tells him the love that they shared was the best thing she’s had in her life. She’s sorry but she could never regret that. Willow’s eyes widen.

Michael finds Carly and they hug. He tells her he knows about Jason. She explains they wanted to tell him in person. Michael thinks there’s hope that he’s alive.