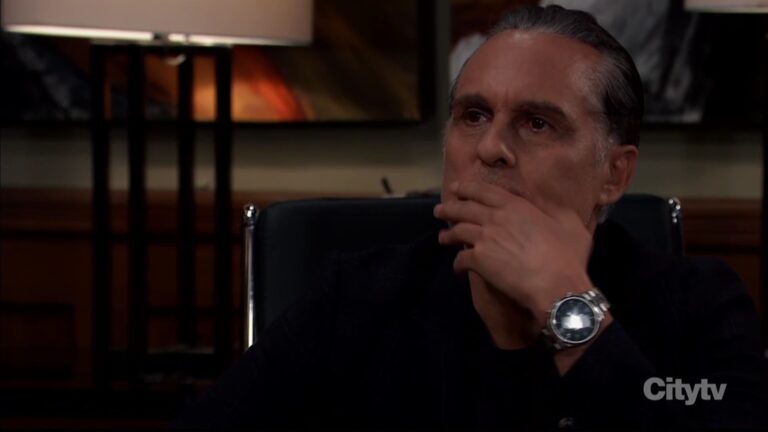 General Hospital recap for Wednesday, August 3, 2022. In today’s GH episode, Rory takes Trina to the pool to forget her worries, Joss tells Cam about Spencer’s plan, and Spence learns he could be heading to jail again.

We also have Monday’s GH recap where Jordan and Curtis began putting the pieces together, as Willow had a biopsy and Spencer was arrested.

Sasha meets Nina at Metro Court and when she’s asked how she is, she snaps. She apologizes quite fast. Nina knows she has a lot on her mind.

She talks about running the hotel being a challenge, and how her partner isn’t welcoming. Still, she feels owning the place was a good call.

She shows her to a table outside and again wonders where her husband is. Sasha came for a drink, and isn’t attached at the hip with her husband.

She’s meeting Sienna Colby, the makeup artist. They talk about Brando being crazed but Nina sides with him.

They all saw her break down at work. He’s worried about her.

Brando meets Sonny in his office. Immediately, Sonny can tell he’s upset with Sasha. Brando explains she ghosted him.

Sonny wonders why he’s not tracking her down. He thinks that’s a bad idea. They had a fight about him trying to control her.

Sonny advises to keep giving her space. He knows Brando understands her as a recovering addict himself.

Brando has nightmares about her buying more drugs. Brando asks Sonny to have her followed, but quietly.

“Are you asking me to help you spy on your wife?” Sonny asks. Brando realizes he is and listens to Sonny. He goes to find his wife.

At Kelly’s, Joss tells Cam that Spencer was arrested. He came forward to give Trina her alibi, letting Cam know that he left Spring Ridge to visit his mama’s grave and saw Trina there.

Cam’s shocked. Joss is thrilled he did a 180 and explains that he told everyone that Esme took the video of them.

She wonders why Cam’s not reacting and he admits he’s known for a while. Months. He was trying to get Esme to slip up.

Cam wanted to tell her. He made him promise. Joss flies off the handle. “I am your girlfriend. I have a right to know.”

Trina and Rory arrive poolside. She’s grateful he brought here there to relax but then she talks about Spencer’s testimony. She’s sorry but Rory gets it.

She’s processing. Trina’s not sure how to feel about what Spence did or her and Rory sharing that kiss.

She thinks he’s assuming she’s too complicated and that he just wants to be friends, because she may be going to prison.

She thinks it makes sense that they stay friends only. He doesn’t want that. “I’m totally into you,” he says. She asks why he’s letting her run her mouth about Spencer.

He laughs. He can’t stand the guy but wants to help Trina. They dip their feet into the water and he says he looks forward to getting to know her more. They share a kiss.

At the PCPD, Jordan tells Spencer he’s probably headed back to prison. She brings him into her office and interrogates him.

He explains the whole thing about escaping and the reason behind it.

At Wyndemere, Nik tells Ava he cleaned up the parapet and there is no sign of a struggle. He isn’t sure if she’s dead, but is laying groundwork for a cover story.

He touches her and she freaks out. “I told you, you touched me for the last time. I’m better off on my own than with the man who betrayed me.”

Nik says she can’t bear the brunt of this on her own.

Ava says she didn’t push her. They were fighting over the letter and it was her own momentum that had her flying over the edge. “You didn’t call 911,” he points out. “You told me not to!”

Ava snipes. She reminds him he had sex with Esme and had sex with her after. It disgusted her and she’ll never forgive him.

Nik thinks if she leaves him now, it’ll look like motive. The staff heard them arguing and told him. If her body shows up on the shoreline, she’ll be the one they’ll come for.

Spence calls to tell Nik he was arrested. He and Ava are shocked as they discuss him testifying and providing an alibi.

Nik says he’ll be back soon but Ava won’t be there. He tries to talk her out of it but she’s done with him.

In some dark area, Smoltz meets with Sienna about screwing Sasha over by recording her. He hopes she’ll talk about using drugs while she killed Harmony.

Sienna (played by Cynthia Zitter) thinks he has it in for Sasha but he says it’s just click bait.

Sienna calls Smoltz and slips her phone into her pocket, recording as she finds Sasha with Nina at Metro Court.

Nina takes off and Smoltz listens from his car as Sasha says she wants to have fun tonight. Sienna tells her to go to the restroom. She’ll follow.

She brings up Harmony’s death and Smoltz thinks to himself that she’s going to ruin everything, and of course, she does.

She claims she’s into true crime stories but Sasha’s done. She takes off and Brando arrives to ask Nina if she’s seen Sasha. Nina tells him she left so he runs to the pool.

At PCPD, Nik turns up and Jordan gives him fifteen minutes with his son, while Martin tries to convince the commissioner to let Spence go.

She says he needs to go before a judge. Not her. In the office, Nik and Spencer discuss him looking for evidence to reveal Esme was the one behind the sex tape.

Nik reveals that Esme’s gone, and Spencer rolls his head and sighs. Martin interrupts to tell them he can’t see a judge until the morning. He has to stay in jail overnight.

Nikolas tries to get them to let him go but Spence is fine. His dad needs to find Esme, the key to Trina’s freedom.

Ava goes to see Sonny. She needs his help in ensuring Trina goes free. He says to go to Esme and get her to confess. “No!” Ava yells, “You can’t do that!”

His guys can find her fast. She says his guys won’t find her in time.

He asks what she did. She deflects. This is about Trina. He’ll do his best. She leaves. Sonny calls Dex with a job.

Ava goes to Nina at Metro Court. She’s taken a room, because of her problems with Nik. They discuss the trial and Ava can almost guarantee that Trina won’t go to prison.

In Smoltz’s car, he refuses to pay Sienna since she messed up. Suddenly, Sasha appears at his window.