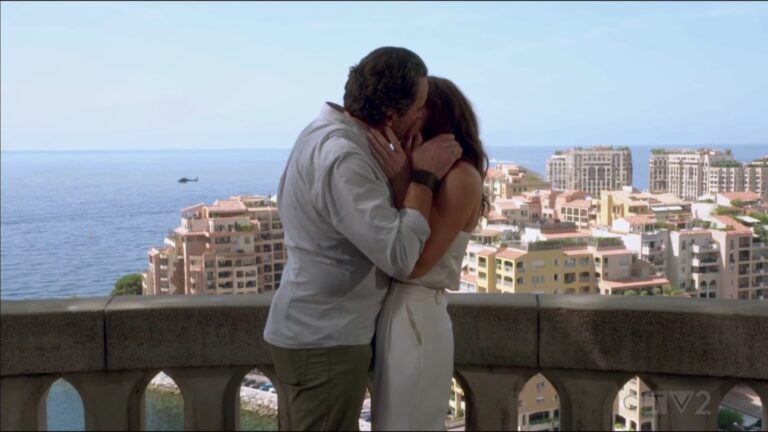 In the Wednesday, August 3, 2022, full episode recap of CBS’ Bold and the Beautiful, Finn celebrates reuniting with his family, Hope shows Deacon her latest work, and Brooke tells Katie Bill did something right.

We also have Tuesday’s B&B recap where Steffy asked Finn why his mother hid him from her and Deacon lied to Baker.

In Monaco, Finn tells Steffy and the kids he’s been dreaming of reuniting with them. Ridge and Taylor are thrilled to watch the doctor fawning over his family.

Kelly notices her mom has tears in her eyes. Taylor decides to take some photos of the reunion.

Ridge suggests they leave them to some family time. He never thought he’d see his daughter smile like this again. Taylor tells them how much she loves them. They hug.

Ridge and Taylor go to the other room and she dances like a teenager. He’s confused. They joke about seeing “Finn-again” and then looking at the pictures of Steffy smiling.

She decides to post this so people can see they are together again and okay. As soon as she posts it, she starts getting likes.

Ridge thinks the world should celebrate the reunion. Taylor wants to focus on the goodness instead of what Sheila did.

He reminds her they went through something together.

Meanwhile, Steffy puts Hayes to sleep. Finn tells Steffy and Kelly that he’s sorry he was away for so long. They are glad to have him back.

“You guys are not going to get rid of me again,” he assures them. Surrounded by them is where he wants to be for the rest of his life.

Steffy and Finn go outside. This all feels unreal to her and she can’t stop staring at him. He repeats that it’s real and he’ll never leave.

They talk about how magical Monaco is. “It brought me you,” she says. He adds it can be their special place.

She’s carried his ring because it made her feel close to him. She never thought she’d put it on his finger again. Sobbing, she slips it on him.

Steffy repeats that she can’t believe he’s alive. He fought hard for this moment. No one was going to keep him from her.

The thought of her kept him fighting and he can’t imagine how painful it must have been for her to think he was dead.

Choking up, she says it was devastating. But she learned what it was like to have something taken from her. She vows never to take him or their family for granted.

Before today, she didn’t believe in miracles. They tell each other how much they love one anther and kiss.

At Forrester Creations, Brooke is on the phone filling Katie in about Steffy and Finn’s reunion. “Just know that Bill did a good thing,” she adds, before hanging up.

Deacon and Hope drift in. Brooke wonders why he’s there. Hope explains she brought him by to see the photos from her latest shoot and she was sure Ridge wouldn’t be around.

They talk about how happy Ridge and Taylor must be with the big news.

Hope shows Deacon the pictures and he thinks they are fantastic. He wonders if she’s thought about modeling full time.

Brooke calls them over to see the photos that Taylor posted. They can feel the happiness through the screen. “Destiny 2.0?” Brooke wonders.

Hope thought that title was reserved for her and Liam. She decides to take a photo of how happy the three of them are to look at the photo of happy people.

Back in Monaco, Taylor reluctantly shows Ridge the photo that Hope posted of her smiling with Deacon and her mom.

“How about them apples?” he ponders. She decides to herd him outside for some air.

They take a walk. She apologizes for letting him see the picture.

He wants to be surprised but he’s not. He left and five minutes later his wife was cosying up to Deacon.

Ridge just wants to focus on where they are. She’s been a rock and the only true thing in all this. He’s never been so proud to have had kids with her.

She thinks that’s sweet. This has really been a whirlwind. It seems like anything is possible.

He pulls her into an embrace. They kiss.