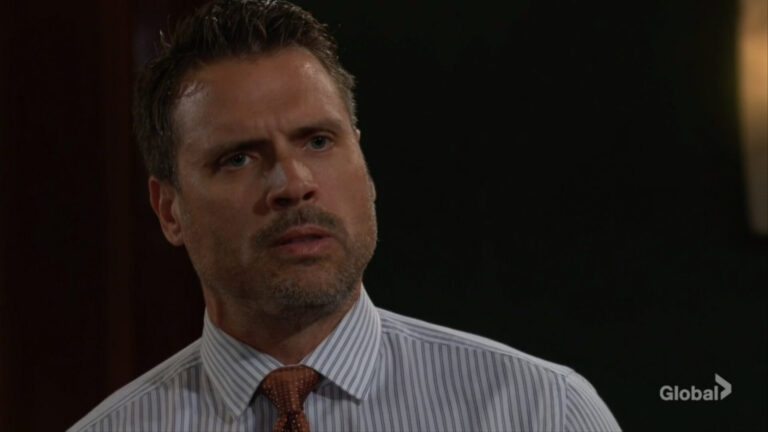 In this episode of CBS’ The Young and the Restless, Diane and Jack talk about second chances, Ashley, Nikki and Phyllis scheme for revenge, and Sally and Adam discuss Locke’s demise. In the previous episode, Sally and Nick debated the Locke story, and Devon started to think hiring Nate was a mistake.

In Sally’s office, she asks Nick if he’s really willing to leave it to her how to handle the Ashland story. He is but would like a head’s up.

She’d like to scoop the competition with what she knows about the night Locke died, but it might be premature at this point. Once she has the relevant information, she will do what she has to.

He thinks that’s smart and appreciates it.

Nikki finds Victor staring at Victoria’s portrait in her office. She’s worried about their daughter too. He’s concerned about how she’s reacting to Locke’s death.

She tells him that Nick is upset and confused. He’s not sure what to make of it.

Victor is sure he will be alright.

Nick visits his father next. Victor wants to know if Newman Media is on the same page as the public announcement they are about to make.

Closing the door, Nick recaps the conversation he just had with Sally. Victor is relieved that she may not be the liability he thought she might be.

He seems bored by this conversation but his son wants some answers about what really happened last night. Victor takes a drink.
Nick says there is nothing simple about this and there are holes in the story. Crossing his arms, Victor is dismissive and shrugging as his son keeps asking questions.

Getting frustrated, Nick demands answers so his father tells him to stop looking for a fight. That only proves to Nick that he is hiding something.

Finally, Victor admits that Locke was found dead on Victoria’s floor and his men took care of things. They found the body, removed it, drove to a ravine, and staged an accident.

“You did nothing wrong,” he tells his son. It was an accident and no one cares that Locke is dead. The cops will close the case and he should do the same thing and move on.

Victor tells him that his motive was to protect him from being investigated.

At Crimson Lights, Chance asks Sharon how she is dealing with Locke’s death. She admits it’s brought back a lot of thoughts about Rey. Nick has been a great help.

The cop asks her if Nick told her everything about what happened that night. Nervously, she tells him she’s been giving Nick support and then claims she has to get back to the kitchen.

Adam bumps into Kevin at Society and they bicker. Kevin gloats about how well his life is going now that he’s out of Adam’s orbit. He accuses him of wallowing in bad habits. Chloe tells him all about it.

When Kevin mentions he’s working on Ashland’s case, Adam wonders why he needs to be doing that at all hours. Kevin gets snarky and avoid saying anything.

Once Kevin exits, Sally strolls in. Adam is defensive but she claims she’s only there for takeout.

They don’t want things to be weird between them since they will keep bumping into each other.

She’s realized he’s right and they are better off without each other. Fighting for a relationship only one of them wants would rob her of her self-respect.

It’s time for Sally to put her energy into herself and her job. No man is worth sacrificing that for. Not even him.

Adam says she made the right call and is glad she kept her job. He’s surprised when she tells him how supportive Nick has been.

Ordering a martini, she tells him she has a good grip on how she will handle things. They chat about Locke being dead. He can’t help but think that it didn’t need to end like this.

She remembers how optimistic he was about his plan to end this. But she thinks it’s hypocritical of him to criticize his sister for looking for revenge.

She knows he was thinking of partnering with Locke before he died. That was before he realized how freaked out Locke was and warned his family about it.

He would never have predicted things ending in a simple car crash. “You don’t know the half of it,” she says.

Adam prods but she’s not about to give him any information. Her loyalty is to Newman Media now. She takes off, leaving looking hurt.

At the Abbott estate, Ashley tells her brother she will be back at a decent hour to go over a lab report. When the doorbell rings, she wonders if she should stick around to keep an eye on him.

Ashley is not pleased when she discovers Diane at the door. DiDi brought something by for Harrison. “I’m going to be back really soon,” Ashley warns as she exits.

Diane brought some age-appropriate books about grief for their grandson. He says that’s very thoughtful.

She assumes he thinks she’s swooping in but it won’t make up for the pain she caused Kyle. Diane can imagine he doesn’t think she deserves to be there for their grandson.

He admits that a few weeks ago he would have felt that. But not now.

Jack won’t question her feelings for Harrison. The whole family needs to be there for him.

Tearing up, she tells him how much it means to her to be considered family again. “I promise I will never let that child down the way I did Kyle,” she vows.

They know the only person who will grieve Ashland is Harrison. She says that to leave behind so little love is a terrible way to end life.

It’s hard for her not to compare this situation to her own. Unlike Ashland, she has been given a second chance and is determined not to take it for granted.

They go through the books she brought. He’s impressed and touched by her thoughtfulness.

Before she can go, she thanks him for shutting Phyllis down in the park. She’s no damsel in distress but appreciates him looking out for her.

It’s been a long time since anyone was on her side. Diane shows herself out.

Nikki jogs into The Grand Phoenix to meet with Phyllis. They sneer about Ashland dying and how much better off they were when Diane was dead.

Ashley swans in next to join in the Diane trashing. Phyllis announces that she and Nikki have hatched a scheme to get rid of her.

As they sit around, they explain that they need to dig up dirt here. They have to create a situation where Diane fails so spectacularly she’ll be forced to leave town.

To accomplish that, they need someone on the inside of Marchetti. That someone will be Phyllis.

“It’s a horrible idea,” Ashley decides. She’s not going to let Marchetti be damaged when it could hurt Jabot. The other woman assures her it will only be something to expose Diane.

Ashley reminds them of what happened with Gloria and the face cream. Phyllis insists they can be more nuanced.

The Abbott thinks that Phyllis joining Marchetti will look suspicious. Phyllis admits she’s already talked to her daughter and handled it. This isn’t winning Ashley over.

However, the ladies toast to taking down Diane. 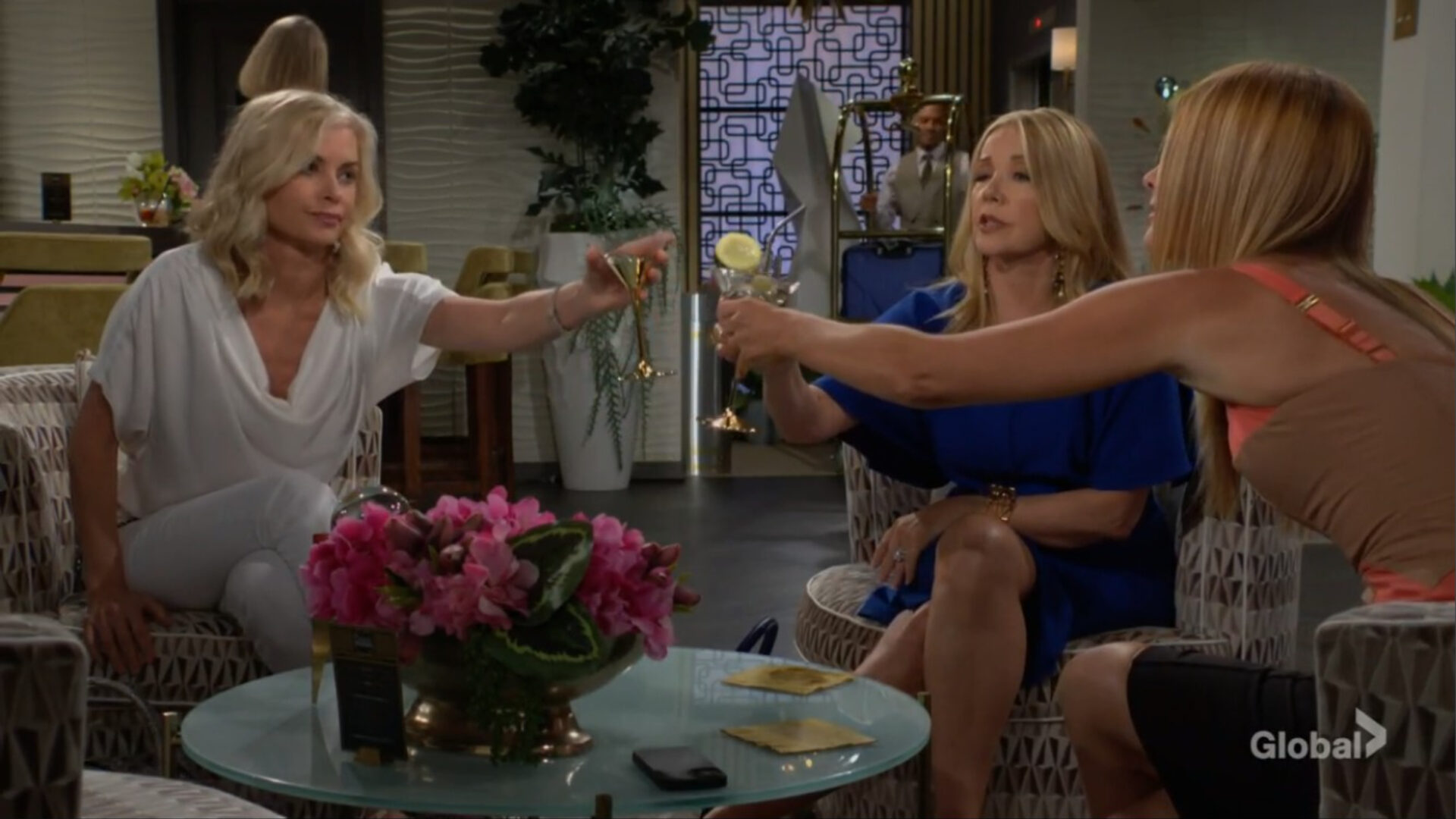 Kevin finds Chance at Crimson Lights and tells him he’s found another piece of the puzzle. A car was spotted in the vicinity.

Chance says they will have to grab the local security footage from the gas station. Maybe that will give them the answers they need.