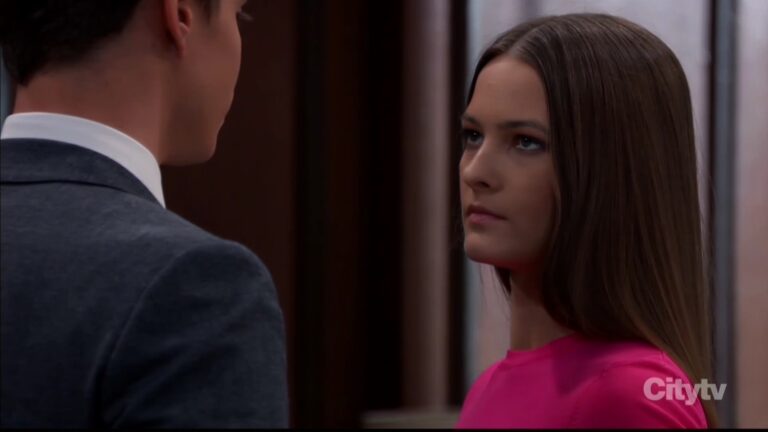 General Hospital recap for Tuesday, July 26, 2022. In today’s GH episode, Carly urges Joss to back down, Nikolas backs out of the divorce plan, and Rory shows up to support Trina.

We also have Monday’s GH recap where Joss recorded Sonny and Dex beating Felty while Anna and Valentin got sexy.

At home, Joss brings Carly coffee. It’s very strong. After she gulps it down, Carly wonders what she was out late doing and how it involved Sonny. Her daughter explains she saw Sonny and his new muscle beating and threatening a guy and recorded it.

Carly’s sorry she saw that. Joss says she would have done the same thing if she’d seen anyone else break the law. Her mom doubts that and is sure she did it because Sonny poses no threat. Joss declares she’s done looking the other way when it comes to him.

Her mom reminds her that going after Sonny means leaving Donna and Avery as collateral damage. Joss points out that being a father isn’t a get out of jail card.

As she complains about what happened at Michael’s trial, her mom stops her. They need to get past this and it won’t be possible if Joss keeps going after Sonny.

Joss admits that she let Dex erase the evidence because he pointed out that Diane would make sure Sonny skated while he goes to jail for following orders. She wonders if Jason was an idiot for making some many sacrifices for Sonny.

Maybe Carly is an idiot too for going along with him. He’s showed them what they really mean to him. Taking her hand, Carly refuses to defend Sonny but insists they co-exist for Donna and Avery’s sake.

Her mother suggests that she was lashing out to get control back after what happened at the trial. Joss beats herself up about that and her mom points out she’s just afraid for her best friend. She’s proud of her for being so loyal to Trina.

By the Metro Court pool, Nina tries to convince the bartender, Aaron, to pitch in and help the wait staff. He gets bitchy and refuses to listen to her after what he read in The Invader article about her. Sonny pops up and tells him to watch his mouth.

He’s sure Aaron must be having some other issues and was just venting. But if that’s not the case, they have a big problem. Aaron sheepishly apologizes and is surprised Nina accepts it.

After he walks off, Nina tells Sonny how impressed she is by him having her back. When he points out that he suggests this sort of thing would happen, they begin bickering.

He insists he will always be straight with her. If she can’t deal with that, this won’t work. She doesn’t need to be coddled and protected. He tells her how roughly he and Carly used to treat each other. Nina doesn’t want to be part of anything like that.

Sitting down, he tells her that he wants a relationship with her. So does she. He suggests they stop comparing themselves to Carly and just be different.

Nina just needs to know his loyalty will always be with her. However, she’s afraid they will never escape Carly’s shadow.

He knows his ex will always be part of this but he can live with that because Nina means that much to him. It’s up to her how much he means to her.

At the hospital, Curtis chats with Portia about last night and how Trina is doing today. She asks how he found the guy he brought in. Jordan strolls over and asks the same thing. She assumes he’s angry because of what she said on the stand.

To her surprise, he thanks her for choosing her words so carefully. He commends her for doing her job admirably. Jordan says she will always be on the side of justice. But she wants to know how he stumbled on Oz.

He offers to explain as long as it doesn’t get back to the ADA. She vaguely agrees to this so he explains why he went looking for Oz and the minimal proof he’s found linking him to Esme. Now he’s in a coma with the information that could clear Trina.

Jordan says they can’t rule out illegal drug use and attempted murder are at play so that gives her space to investigate.

At Wyndemere, Ava and Nikolas make out in the hallway on her way out. When she checks the mail, she finds their “future” in an envelope. It’s their divorce papers. He tells her they don’t need to deal with those now.

She thinks they should get it over with but he snaps he can’t sign them. He says she was right all along and the divorce is off. Reality struck and he realized how random life can be. The prince can’t risk putting her through the danger of tempting fate.

She’s thrilled they are ditching this plan and he promises they can celebrate tonight. Ava kisses him and takes off.

In the great room, Esme calls the hospital to get an update on Oz when Spencer interrupts. They begin bickering. She doesn’t think it’s possible to get Trina off the hook and not go to prison herself.

Esme reminds him of all she has done for him out of love. He refuses to listen and demands she make a choice. She’s not sure it’s worth it to help Trina, particularly since she’s lost him because of her.

He rejects the idea that she loves him and orders her to set Trina free before it’s too late.

Nikolas interrupts and announces he pulled some strings to get her internship at Spring Ridge reinstated. She rushes off. Spencer wonder why he’s helping his girlfriend so much.

When he admits things are “complicated” with her, Nikolas says that may be his fault. Spencer insists what’s happening isn’t his fault. The prince can’t promise not to make any mistakes, but he’s a flawed man and likely will.

Esme buzzes back in and says she’s ready to resume her internship. She promises Spencer she will see him at the court house. Once he takes off, Nikolas tells her they need to discuss her almost exposing them sleeping together.

She tries to assure him it was just a weak moment and bustles off.

Jordan later arrives to question Nikolas about a recent guest to the island.

In the court room, Trina worries to her father about whether the jury will believe her. Taggert assures her that everyone who testified for her came out swinging. He tells her not to back down.

Rory jogs over. He’s taken a personal day to come and support her and apologizes for how badly he did on the stand. She tells him to give himself a break. He wants to make it up to her.

The ADA catches them and calls him away, telling him it doesn’t look good for him to cavort with a defendant.

When he returns to Trina, he tells her not to worry. She can’t stop herself. He steps away when Ava shows up. She asks about the cop. Trina says they are just friends right now but suggests she ask again when the trial is over.

Joss and Carly arrive. Trina tells her friend she can’t believe Rory has shown up to support her. Meanwhile, Ava tells Carly she’s welcome to spend more time with Avery.

Taggert gets a call from Portia in a panic. She has an emergency with a patient and can’t leave. He assures her their daughter will understand.

Trina corners Rory and tells him that if he needs to go to avoid trouble, he should. It means a lot to her that he’s putting himself out on a limb. He’s not going anywhere. They turn and stare as Spencer arrives.