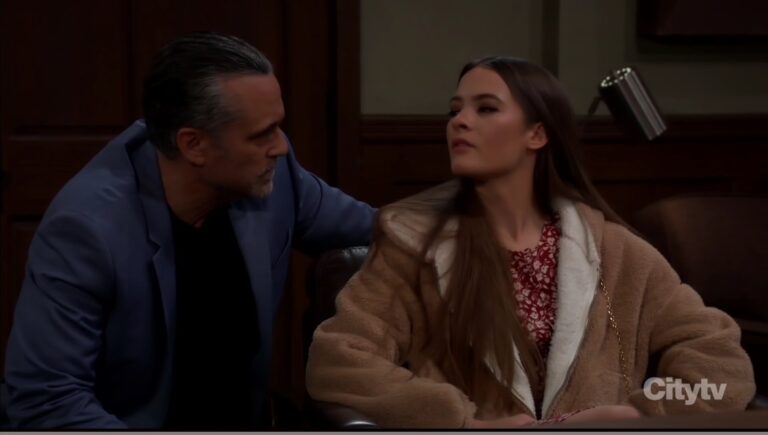 General Hospital recap for Wednesday, March 30, 2022. In today’s GH episode, Sonny interrogates Esme, Brook Lynn asks Chase for a favor, Gladys tells Sasha what she thinks of her marriage, and Trina orders Spencer out of her life.

We also have Tuesday’s GH recap where Esme was grabbed by Sonny’s thugs and it was revealed that Harmony killed Neil.

At the PCPD, Dante and Chase talk about Brook Lynn. Dante grew up with her and says she always had a heart beneath her selfish act. Chase gets defensive. Dante reminds him he keeps saying he can’t trust her. “Just give Brook Lynn a little more credit,” Chase says.

In the Deception office, Lucy, Brook Lynn, and Maxie discuss the IPO for the company. Lucy wants to ask all the acts from the Nurses’ Ball to appear at the launch, especially Chase and Amy.

Gladys barges in, eager to get some stock options now that Sasha is her daughter-in-law. Lucy says if she wants to prove her worth to the company, she can fetch them lunch and chases her out.

Waving her hands, Lucy urges Brook Lynn to go and ask Chase to sing. Brook Lynn shoots it down. They owe him enough already.

Lucy doesn’t see the point of friends you can’t guilt into helping you. “I need gummies!” she declares, storming out.

Maxie asks Brook Lynn what the deal with Chase is. The Quartermaine admits that she has feelings for the detective, but he’s put her in the friendzone. Maxie guessed that.

They hear Lucy speaking to Chase in the hall. They enter and things are awkward. Chase is recruiting for softball.

Maxie makes an excuse to drive Lucy out of the room and leave the other two alone.

Chase and Brook Lynn discuss softball. She tells him Lucy wants singers for the launch party and would love for him to sing with Amy.

He smiles. He’s flattered but only sings for charity and doesn’t know how it would look to sing for a cosmetics company.

Upset, she interprets this as meaning he doesn’t belong in her world.

He didn’t mean it that way. She makes an excuse to get rid of him. He mopes into the hallway confused.

Brando and Sasha arrive at the Metro Court. They loved their time away and aren’t willing to give up the honeymoon vibe. They kiss and decide to get take-out before sneaking away. Now that they are married, there are some things they need to discuss.

They are married but still don’t live together. She thinks they should just enjoy being married. She’s happy with how it is now.

Gladys rushes over. If she’d known they were coming back, she would have taken the day off.

Gladys tells her son he can retire early now that he’s married to Sasha. After she buzzes off for the lunch order, she returns and tells them she only wants what’s best for both of them.

When Brando leaves to take a call, Gladys tells Sasha that it doesn’t seem like she thought getting married through.

Sasha admits it was spur of the moment, but it was the right decision. She promises she will make him happy. Gladys is sure he will be happy, but she doesn’t want him hurt. Lucy and Maxie come over and congratulate the newlywed.

Lucy is determined to throw a big marriage party for them. Sasha insists that’s not necessary, but no one listens.

Lucy thinks people will flip out when they learn the face of Deception is married. Maxie sees Sasha looking flushed.

When they sit down and show her the book for the launch, the first picture is of Sasha pregnant. She immediately runs off and calls her drug dealer.

In her office at General Hospital, Portia and Curtis eagerly wait for Scott to arrive to discuss Trina’s case. The lawyer enters and tells her the case is a doozy.

Portia insists her daughter is innocent. He believes it and explains the case is loaded with opportunity to cast reasonable doubt.

He explains how the arraignment could go and how useful Trina’s reputation will be to defend her. He reminds them Cam is his grandson and he wouldn’t represent anyone he thought could do this to him.

After he leaves, Portia tears up. She tries to stay strong for her daughter. Curtis assures her that he’s got her, whatever happens.

In the interrogation room at the PCPD, Trina tells Spencer that she is innocent. He points out there is evidence pointing to her.

She insists Esme is behind this. Spencer reminds Trina that she was drunk and mad and can hardly remember what happened.

Esme was with him the entire time. She repeats she didn’t do it and Esme set her up. He’s seen the worst in his girlfriend, but he was the instigator in the things she did.

Trina says she would never intentionally hurt a person.

Spencer points out that she’s lied for him. He seems to excite negative impulses in women. Trina says what she did for him doesn’t compare to making a sex tape.

She can’t believe he would say this when she has always defended him as a good guy.

She’s sure he’s still blind to Esme. “Everything she’s done has been for me and my family,” he says. He explains she might be carrying his child.

That explains a lot to her.

From the moment she met him, her life has gotten worse and now she’s been arrested because of his girlfriend. If he can’t look her in the eyes and tell her she’s innocent, they have no more to say.

She orders him to leave. The guard hands her a soft drink.

When Spencer goes out to the office, Portia arrives and starts lecturing him about Esme. Dante gets between them.

Curtis ushers Portia to the interrogation room and Dante asks Spencer to leave.

Portia hugs her daughter in the interrogation room and tells her to go into the courtroom with her head held up.

Curtis and Scott join them and they head to court.

Victor arrives at Charlie’s and tells Nikolas he saw Esme driving off in the backseat of a car. Nikolas is surprised because she was supposed to come right back.

His uncle tells him she might be carrying the next Cassadine heir.

That explains why she’s so emotional. Nikolas wonders how his son is handling this. Victor says the kids will need their support.

When they step outside, the prince tries calling her and finds her phone on the ground. He guesses Sonny must have her.

Esme is plopped down in Sonny’s office by one of his thugs. He claims he didn’t intend for his colleague to frighten her, but he wanted her to come in for chat. This is about what she did to his stepdaughter.

She claims she’s innocent and the PCPD arrested someone else for the video. Sonny tells him his instincts are never wrong and they tell him she was behind this.

Esme repeats that she is telling the truth. He reminds her of when she lied to him at the hospital.

Esme says that was just a misunderstanding. He accuses her of lying to his face and reminds her of what she did to Ava and to Avery with the teddy bear.

She apologized and he forgave her. Sonny has a long memory when it comes to people who hurt his family.

Crouching beside her, he tells her to save everyone some time and just admit she was behind the sex tape. She repeats that she didn’t do it.

The mob boss says he’s had his share of regrets, but they don’t have to define you.

You can take responsibility and move forward, bettering yourself for the people who will come into your life. She has the power to make things right. All she needs to do is confess.

Victor and Nikolas barge in outside. Esme yells for help and runs out to Nikolas. Sonny says they were just talking. After the prince leaves with Esme, Victor puts Corinthos on notice. Sonny smirks.

Victor warns that the Cassadines always come out on top and he might have to learn that the hard way. Sonny has come up against more frightening people and challenges him to take the first shot. “Believe me, I will finish the fight!” Sonny declares.

Spencer arrives at Charlie’s and finds Esme hugging his father and thanking him for his help.