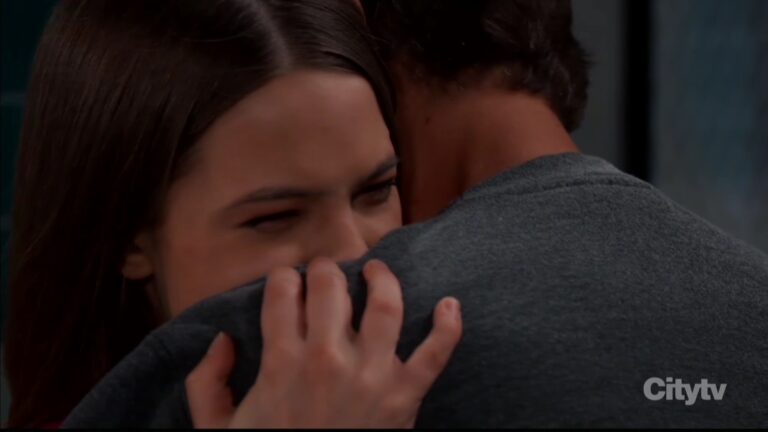 General Hospital recap for Wednesday, July 27, 2022. In today’s GH episode, Spencer speaks at Trina’s trial, Jordan looks for answers about Oz, and Cody gets advice about Britt from Maxie.

We also have Tuesday’s GH recap where Nina and Sonny argued and Spencer prodded Esme to save Trina.

Jordan stops by Wyndemere and asks Nikolas about Oz paying the island a visit. News to him. Everyone was out yesterday morning other than Esme and the staff.

She informs him that Oz is in a coma and may have sold Esme the phone used for the sex tape. When he asks for details, she won’t offer them but says they need to speak to Esme.

After she exits, he flashes back through his conversations with Esme and her desire to confess they slept together. Victor bursts in and sees he’s a mess. Cleaning up messes is one of his specialties.

Nikolas explains that Esme could expose him. Victor is appalled to realize he slept with her. The prince complains that she’s a monster. Victor grudgingly admires her and then says Ava and Spencer don’t need to know about this.

He’s decided that it’s time to “evict Esme for good.” Nikolas says she didn’t jeopardize anything, he did. His uncle thinks guilt over the “vengeful Lolita” is misguided.

Nikolas doesn’t want to go down a road he can’t come back from. Killing Esme would not rub his mother the right way. He wants to prove he’s willing to face up to his failings.

Victor offers to drive him over to the court house.

Esme gets into Spring Ridge to visit Ryan. He wonders why she has such a sad face and reminds her they can accomplish anything. She explains that Kevin had her banned from visiting but she manipulated Nikolas into restoring her privileges.

Ryan worries that the prince might confess and ruin things. She says Felicia is to blame for her banning. He promises she will be dealt with. Right now, she needs to put some distance between herself and the Cassadines.

She explains Spencer wants her help to exonerate Trina. He has the identity of her birth mother. Ryan says she’s been compromised and now he could be exposed as her father.

She’s starting to think he doesn’t care about her. Her father asks what she wants. Esme needs to know who her mother is. Ryan isn’t convinced that Victor could find her if he couldn’t.

Esme says that if he doesn’t want her to take Spencer’s deal, then he needs to tell her who her mother is.

Her father claims he had an unorthodox relationship with her mother and never knew her name. She understood and accepted him, then disappeared.

Ryan suspects that Spencer is bluffing.

Esme doesn’t need to confess, just get Esme off the hook. He warns that if she disobeys him, she will be an orphan again.

She warns him that she might have to leverage information about him to avoid jail time.

He abruptly gets up and walks over to her, hugging her and saying that her mother meant everything to him.

That time in his life was very painful and her mother was the only person he could be himself with.

She walked away and he can’t stand the thought of their daughter doing the same.

Esme promises she would never betray him.

He whispers that there’s no place on earth he couldn’t find her. One day they will reunite with her mother, but right now they have more immediate concerns.

When Spencer arrives in the court room, Trina heads over to him.

He tells her he’s there for her. She reminds him he’s a witness for the prosecution. He says he’s going to tell the truth.

The ADA interrupts and tells Spencer she’s glad to see him but wonders where Esme is. He promises to make sure she gets there.

Trina tells Joss she was a fool to believe this would all work out.

For a second, Trina thought that he had her back.

When the trial resumes, Spencer takes the stand. He’s prompted to describe the night in question.

The Cassadine goes over the details and insists he has no idea what happened in the house after he left with Esme.

The ADA makes him admits that Trina is the only person he knows was there.

When a recess is called, Trina stomps over to Spencer and accuses him of being happy to help Esme.

Ava glares over at him as he sends a text.

The ADA calls Esme and orders her to the court house or she will be held in contempt. Before Esme leaves Spring Ridge, Ryan promises his daughter they will find her mother together if she doesn’t do what Spencer asks.

Diane tells Trina and Taggert that Spencer gave them an opening about Esme’s whereabouts. They can use that against her.

Ava tells Spencer she’s onto him.

He had the chance to give Esme an iron clad alibi and he didn’t. “Whose side are you really on?” she wonders.

Cody stops by the pool and gives Aaron a buck for tipping him off about Britt being there. He strides over to her as she gets mocktails with Maxie.

He accuses the doctor of avoiding him.

Britt explains that he was her last date and terrible. Cody confirms it was terrible and it was his fault. He just wants to make it up to her.

Maxie suggests he get them drinks.

After he walks off, Maxie says he gets to her.

Britt groans that he’s arrogant and persistent. “Seems like Society Set-Ups got this one right,” Maxie quips.

He returns with drinks and asks to start over. Maxie leaves to powder her nose.

Cody sits down to grovel. He’s tried to hard and wants to get to know the real her. She squints and accepts his peace offering but laughs in his face when he asks for another date.

He accuses her of not wanting anyone to get close to her. She’s finished with this and walks out.

Maxie tells Cody he has chemistry with the doctor and urges him to be fearless.

She’s pretty terrifying and just wants someone who will like her at her worst.

Cody wonders if he can convince people Britt cares about that he’s okay, she will too. He shows her a passport he made for their dates.

She says it’s corny and sweet. Britt will hate it and then love it.

When he suggests she give it to her, Maxie doesn’t want anything to do with this.

Maybe he just needs to prove who he really is.

Jordan stops by General Hospital and asks Britt if she can get details about Oz’s tox screen. She doesn’t have a warrant or anything.

Britt lets her ask questions anyway and wonders why Curtis is staying outside the patient’s room.

The doctor looks up the report and can confirm there is no record of him visiting their pharmacy. She wonders if there is a rash of drug overdoses.

Jordan is evasive and asks about anyone who asked about the drug.

Britt flashes back to Spencer asking her about the drug and won’t say anything.

The cop assumes she’s protecting someone.