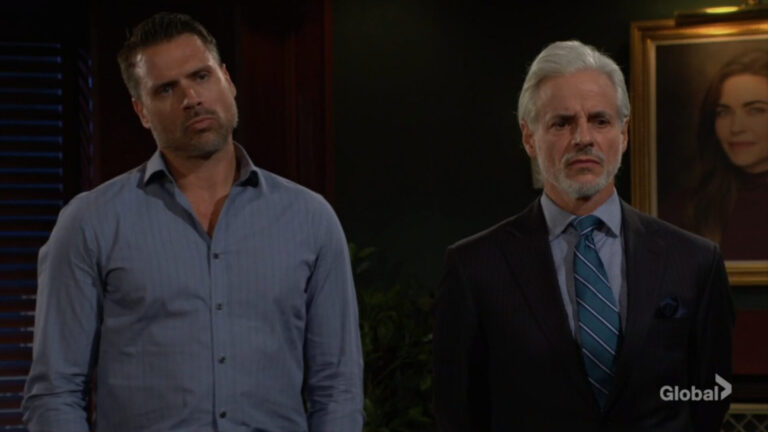 In this episode of CBS’ The Young and the Restless, Michael keeps his ears open, Nick brings Chance the ring he found, and Victoria’s family keep telling her she’s not responsible.

In the previous episode, Sally slapped Adam & Locke was found, and Nick helped Chance with his detective work.

Sally drops by Crimson Lights. She finds Nick and tells him she’s there to talk with Sharon about Adam. He cuts her off.

He apologizes but can’t talk about the drama between her and his brother right now. She can see he’s upset and asks what happened.

He doesn’t want to talk and asks her not to take it personally. She suggests he sleep but he is waiting for other shoes to drop.

They all knew that. He asks her to stop making excuses for Adam like Sharon did. He  tells her to stop throwing herself at Adam’s feet and asks if this is all the self respect she has.

She assumes he’s being harsh because he’s projecting what his sister did.

Michael drops by Victoria’s office at Newman and tells Vic that everyone on his security team has been briefed.

Victor appreciates what Michael did for them. He won’t soon forget this.

They think Nick will have questions. Victor takes a call.

Phyllis drops by Society for some bonding time with Summer. She hopes her mom isn’t there to trash Diane Jenkins. She’s not.

She wants to go back to the time they used to chat before Diane returned.

Summer’s happy to do that. She starts complaining about how hectic things are at work.

Phyllis says that the first, second, and third rounds are on her.

They laugh. Phyllis claims she’s not busy at work and offers to help. She brings up Chelsea pulling out of her commitment as lead designer.

Summer says it was but she thinks her mental health is more important. Phyllis offers to take the marketing role she offered her but Summer says someone’s in that role.

Does she really want a job?

Phyllis loves the hotel but it’s not as challenging and rewarding the way it was in the beginning. Summer asks if this has anything to do with Kyle hiring Diane.

Phyllis lies that it’s not. Summer doesn’t believe it. Phyllis doesn’t agree with Kyle’s decision to hire Diane, but won’t do anything about it. This isn’t about Diane.

It’s about them working together. She says to think of all the fun they could have creating, going to fashion shows…

Summer admits she likes the idea but has to run it by Kyle. He won’t be thrilled at her and Diane in each other’s faces. Phyllis won’t get in her face.

She admits she had a hard time letting go  of the “absolutely horrible, horrible things” she used to do.

She vows not to let anything jeopardize their relationship.

They joke about giving her a job as company chauffeur since she’d look good in one of those hats.

Back at Crimson Lights, Nick gets a text from his dad and takes off.

In her office, Sally tells Chloe that she’s torn over keeping her CEO position. Chloe worries and asks what’s up. Sally says nothing and Chloe realizes it’s about Adam.

Sally relays the entire story about Adam sacrificing himself for her. Chloe feels for her. She reveals she confronted him.

Chloe hopes she knows quitting would be crazy. Sally’s confused and asks for help.

Chloe gives scenarios. If Adam asked her to quit to prove her love for him, what would she do? Sally calls that unfair since that’s what he did.

Chloe says indeed. It’s reverse psychology. Adam has her begging to accept this sacrifice in honor of her love for him.

Sally says that’s not what she’s doing and then realizes that Chloe’s right. “You are feeling his massive ego.” Meanwhile, he’s putting her down.

Is that what she wants her life to look like? Sally doesn’t want that.

Chloe explains that Adam will constantly putting her love to the test because he doesn’t know any other way to be.

Chloe asks what she’ll do now. Sally honestly thinks he wants this opportunity to prove himself. She doesn’t think he’s been playing her this whole time.

Chloe thinks she’s trying to convince herself that Adam’s love was real. It’s time to stop fixating. Sally still wonders if he loved her but Chloe worries she’ll forget who she is.

Chloe says Chelsea fell into this same trap. She lost years with her obsession with Adam. She ends her pep talk, getting Sally to remember who she really is. “You are not a quitter.” Sally decides to stay.

She finds her confidence and decides to make the most out of this opportunity she’s been given. “Correction. That you’ve been earned,” Chloe says.

Sally thanks her for being a good friend. Sally’s excited and honored to work with her again.

Back in Victoria’s office, Nick arrives and Vic says Nikki’s caring for Victoria, who is resting at the ranch. Nick asks why they called him there.

They must know something. Michael says they haven’t heard anything yet. Victor says when the man is caught, Victoria can press charges.

Michael talks about the man going on trial and how many things are against him. Vic is sure things will turn out the way they’re meant to.

Chance strolls in with an update. They ask if the car at the bottom of the ravine was Ashland’s. Chance says yes, it was his. He was behind the wheel. “Ashland Locke is dead,” he tells them.

Nick asks for details but they need to wait to hear back from the morgue on that.

Victor will tell Victoria. Chance asks why Victor was at her house.

Vic claims his security detail told him. Chance asks why it’s the first he’s hearing. Victor says he didn’t ask. He’s had them deployed since Ashland returned to Genoa City.

His detail saw Nick knocking on Victoria’s door to no response. They knew something was up since she was inside. Nick says he went around back to get in. “Did your guys follow Nick to the back door, Victor?”

Chance asks. He says they did and became alarmed and called. Nick and Chance admit they didn’t see them.

Victor asked them to take the night off. He said he’d take care of it. Chance is surprised they didn’t see Ashland come and go and that they didn’t look inside.

Michael thinks that Vic already answered those questions. Victor thinks this is turning into an interrogation but Chance is just fleshing ti all out.

Vic offers his security detail’s number to confirm this, so Chance takes off.

Once he’s gone, Nick demands to know what they’re keeping from him, if anything. Victor thinks that he’s just projecting guilt and he has no need to.

Michael says Nick had nothing to do with him getting behind the wheel. Victor suggests that Ashland got up, walked out of the house and drove himself into the ravine knowing he’d kill himself.

The point is, he can no longer cause havoc with his sister. Victor asks him to come to the ranch and get away from it all but Nick needs to go for a drive to clear his head. He takes off.

Nick arrives at Society and stops by Phyllis and Summer’s table. He tells them about Locke’s death. Summer’s shocked and takes off to tell Kyle.

She’s not sure how they’ll deal with this. With Harrison.

Once she’s gone, Phyllis tells Nick to look on the bright side. Nick sighs.

She tells him that he’ll never have to deal with the man again.

At Crimson Lights, Chance looks at the ring that Nick provided, that’s now evidence. He stares off, brow furrowed.