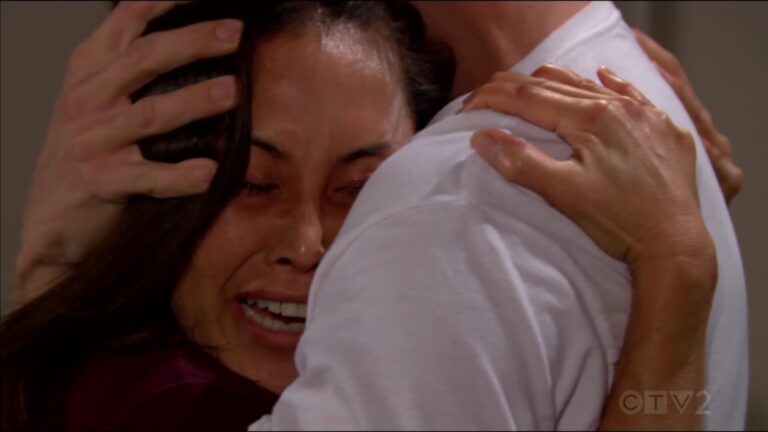 In the Wednesday, July 27, 2022, full episode recap of CBS’ Bold and the Beautiful, Taylor and Ridge fly to Monaco to see Steffy, Li explains what happened to Bill and Liam, and Sheila tries justifying herself to Finn.

We also have Tuesday’s B&B recap where Liam was shocked to recognize Li as Bill’s guest and Deacon wanted a chance with Taylor.

At Bill’s, he reminds Li that he found her on the street so she must have undergone some trauma. She says Sheila’s name and Liam explains she killed her son. “Finn is alive!” Li blurts out.

They assume she’s confused. “He’s alive! He’s with Sheila!” she insists. Bill believes she believes she’s telling the truth. Liam has some questions.

Li explains the hospital wrote her son off but she saved him and now she has to stop Sheila. The Spencers squint and look at each other.

Sitting down, she explains that she wanted everyone to think her son was dead. She smuggled him out and signed the death certificate. As she nursed him back to health, Sheila broke out and tracked her down, discovering Finn is alive.

She tried to warn the police but Sheila chased her in the car and she drove off the road. Her son is with Sheila and she needs to save him again.

Liam wants to tell Steffy but Bill forbids it. No one can know until they have dealt with Sheila. Bill and Li head out as Liam calls Baker.

At the hideaway, Finn doesn’t believe Sheila when she tells him she loves him. If she does, she needs to do the right thing and let him do to be with his wife and son. He’s wanted to believe that there is good in her, but this doesn’t feel like love.

Holding him against his will and sedating him feels more like punishment. She must be causing Steffy all sorts of pain. He’ll never see his mother again because of her but won’t let the same thing happen with his wife.

She checks his vitals and he reminds her that this situation is not sustainable. He’s not helpless and she can’t keep him there.

Sheila never meant for any of this to happen. She came back to LA with good intentions. All she wanted to do was tell him she is his mother. Things could have been so different if only Steffy had acted differently.

He refuses to believe Steffy is to blame for any of this. His mother says she could have proven herself and taken her rightful place in his life if his wife hadn’t been hellbent on stopping it.

They rehash him getting shot by accident. He won’t listen to any justifications for something so unforgivable. She repeats that she loves him and can’t go to prison thinking she will never see him again.

If she saved his life, he says, she should let him live it. Nothing makes him happier than Steffy and the kids. She needs to let him go.

Sheila tells him he’s a compassionate man. Maybe he can forgive her? He doesn’t think so and unplugs himself.

When she tells him he can’t walk out, he asks if she will shoot him again. “I’m not your son. Do you have an idea what you’ve taken from me?” he asks. He wants her to see how much destruction she’s caused.

She finally backs down and won’t stop him. He wishes it could have been different.

Ridge and Taylor are on a jet to Monaco. She beats herself up for not pushing her daughter more. She wanted to take her at her word that she was doing okay. Ridge says they will make sure she comes back from her loss.

The doctor just wants to hold Steffy and remind her that family is there to support her. He says the only person who can life her darkness is gone forever.

Taylor talks about how unfair everything is and hopes her daughter is getting tools to cope. It hurts her heart that Hayes will grow up never knowing who his father was.

He hates long flights and can’t rest because he’s too wound up. She complains that the Wi-Fi keeps dropping out. She’s noticed that Li disappeared from social media.

Taylor sleeps on his shoulder and then wakes up to say she dreamed about their daughter going to a bonfire on the beach and being happy.