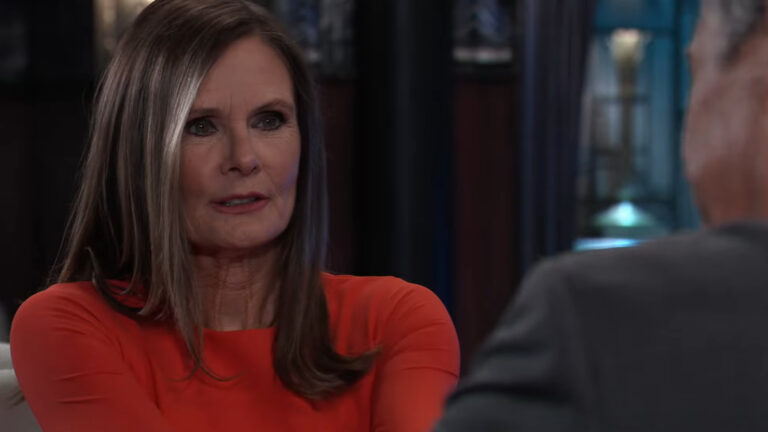 We also have Wednesday’s GH recap where Anna warned Valentin about Victor, and tests showed Brando was poisoned.

In Jacksonville, Carly gets her phone up and running. She sees she has a lot of missed calls and checks them.

Payton interrupts to wonder why she is still around. After they trade some barbs, Carly urges her to hold another vote and reconsider moving the cemetery.

Things keep getting nasty and they dredge up the past and Carly threatens to make things hard. She offers to buy her a drink to talk this over.

Payton wonders if she can afford that after she lost her hotel. She says Carly can put whatever she wants on her tab and swans off.

Nina joins Sonny at Charlie’s. He tells her about the fight that he and Alexis just had with Kristina.

Drew wades in to offer his condolences about Brando. When they ask how Carly took the news, he tells her he hasn’t spoken to her in days. He offers to make some calls.

After he walks off, Sonny tells Nina he’s only worried because of the dangerous situation. She tells Drew and Carly are looking like a lot more than friends.

He insists on getting her security. Drew returns and says Carly still isn’t answering her phone. After he leaves, Nina and Sonny worry about Sasha. She’ll need their support.

Carly calls him and Nina steps out. Sonny tells his ex what happened to Brando. She’s shocked. It doesn’t make sense. She’s sorry and wonders why this is happening.

Sonny tells her that the killer could be attacking people close to him. He has security on the kids and she’s safer staying where she is. She thanks him.

Payton returns and Carly tells her she’s not going anywhere until she makes sure her mother stays in the cemetery. “I’m still really good at raising hell,” she warns her.

Lucy is startled by Victor renting out the Haunted Star for her. She’s even more startled when it unmoors. He tells her they will be miles from Port Charles soon.

She admits this was rather inspired. They recall him arriving on it many years ago.

If she didn’t know better, she’d think he was abducting her. It’s been a long time since she was kidnapped.

He has her sit and champagne is served. She wonders if all his business lunches include boat rides.

As he toasts, he tells her they get to watch the sunset from the deck. He’s made sure she’s free for the rest of the day.

They chat about how disappointing Valentin has been to him. She wonders when they are heading back to land.

He whips out a jewelry box and announces they are just getting started. She’s thrilled as he slips it on her and wonders what she’s done to deserve it. She reminds him she’s a “lady.”

Victor assures her his intentions are honorable. He just wants them to forge an alliance. He doesn’t do things by half and something big, even earth-shattering, is coming.

“We’re heading into rough waters,” he says and the only way that lives will be saved is with him at the helm. He needs a first mate and thinks that could be her.

She urges him to share his nefarious plans with her. He’d like nothing more but isn’t sure who to trust. He sends Johan outside for some air and then says they are alone at last.

At Deception, Maxie tells Anna and Valentin that Lucy was trying to get rid of Victor, but he was persistent. She wonders what’s going on and if she should be worried. Valentin is reassuring.

As Maxie makes calls, Anna worries that pushing Lucy into this was a mistake. Valentin is sure she can handle herself. She worries Victor has figured out Lucy has an agenda.

Maxie tells them it’s weird Lucy took off while they were in crisis mode with Sasha. She points out that Lucy made a tweet about stars with a jack o’lantern.

After Valentin and Anna rush off, Maxie calls James to talk about Halloween. Nina stops by to get her opinion on the best way to help Sasha.

Maxie says she’s the last person to ask. She tells her that they were pushing Sasha out of the company to protect the bottom line.

Sasha was so upset she had another public meltdown. How many times can her heart be shattered? Nina urges her just to try and give her what she needs, even if she pushes her away. Someone will have to plan Brando’s funeral.

Anna and Valentin grab a boat and chase after the Haunted Star. He assures her that Lucy will be fine if Victor hasn’t sniffed out her deception.

Johan comes out and Anna has to stop Valentin from sneezing. She’s not quick enough. Johan hears something and pulls out his gun.

At General Hospital, Jordan instructs Portia and Finn not to leak any more to the press.

As Finn checks the toxicology report, he says that whoever they are looking for has a real imagination for murder. It’s a reptile venom.

Jordan doesn’t recall any serial killer profiles that include something like that. It’s too soon to say if there is a serial killer.

After Portia walks off, Finn tells the commissioner that whoever spoke to the press is only trying to help. She tells him that they have already received false confessions from people.

When Jordan bumps into Portia, she thanks her for running a tox screen. Portia tells her whatever it takes to get to the truth. Jordan is glad they are both on the side of truth.

Finn sits in his office and looks at old pictures of his dead wife on his phone.

Liz stops by Kevin’s office at General Hospital. She can’t stop thinking about the memory of the man who might have been her father.

He points out memories are tricky and to verify it, she will have to reach out to her father. She’s not ready to do that yet and has another idea.

She’s eager to get more details as soon as possible. He has another appointment but agrees to cancel it.

Once he has her under hypnosis, she tries to picture the faces of the people on the stairs. It’s fuzzy and she doesn’t see the face.

Once she’s brought out, she says she knows exactly what needs to be done and runs off.

Going into an office, she gets out her sketchpad and starts drawing a woman who looks like Finn’s dead wife.