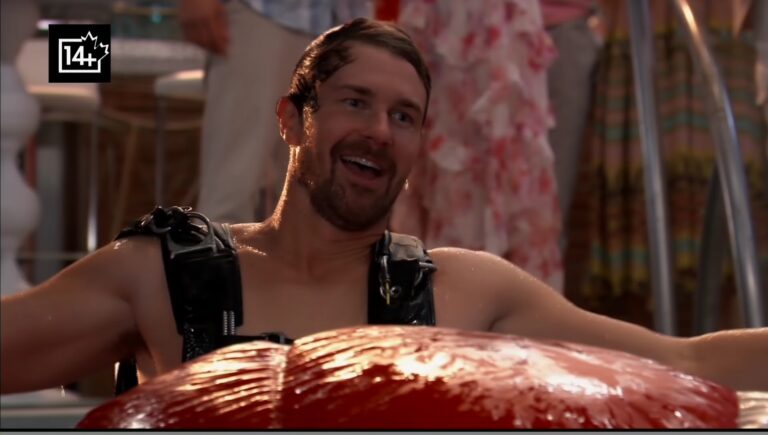 General Hospital recap for Thursday, June 2, 2022. In today’s GH episode, Sonny goes looking for Nina, Michael assures Drew he won’t use ELQ in his revenge plot, and Nikolas has a confession for Ava.

We also have Wednesday’s GH recap where Esme and Nikolas had sex and Nina was devastated by the judge’s ruling. 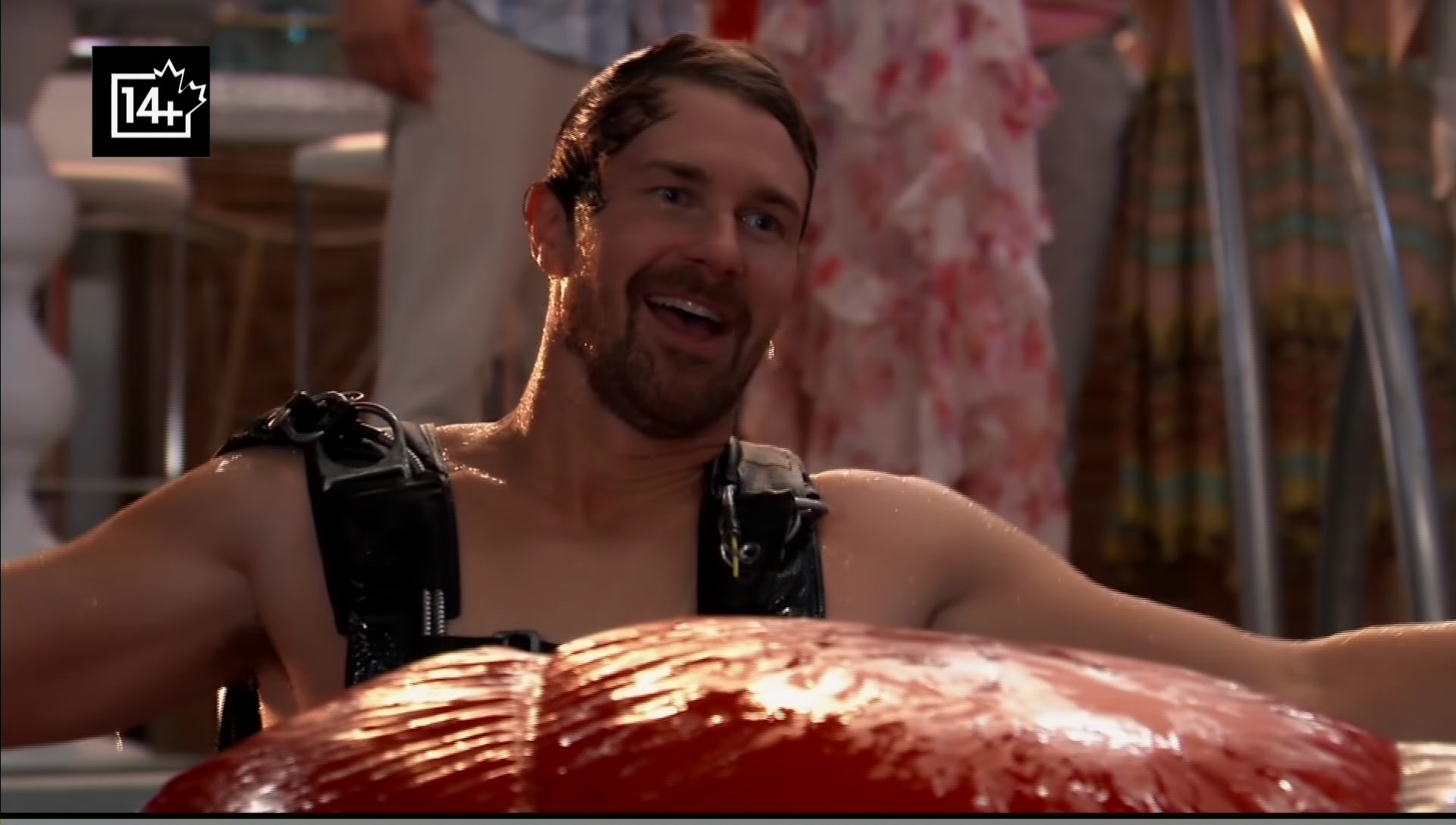 On the Metro Court roof patio, Britt is flustered as she flaps in the pool after a man has parachuted on top of her and knocked her in. She calls for help out and he greets Port Charles.

Brad records the whole thing as Britt crawls out. She asks Dante to arrest the guy. Maxie assumes the stunt was planned. The cop calls the guy out of the pool. He’s shocked when he recognizes him as Cody.

Once he climbs out and is given a towel, Cody apologizes to Britt. He was told the pool would be clear and wonders how Dante ended up there. He’s surprised to learn he’s a cop.

Dante cuffs him, much to Britt’s delight. Sam does not look amused by any of this. The cop explains it was reckless endangerment but Cody insists he was hired to do it. Spinelli says it was a brilliant marketing idea.

The doctor still wants him arrested. Brad says he should be let off with a warning or a spanking. Dante and Sam lead his friend away.

Spinelli gets Britt coffee and tells her that they will one day look back on this and have fond memories. Brad certainly will. “He’s all mine,” Britt warns him. She vents about the cynical attempt to sell romance and wants to sue him.

Chase asks Brook Lynn to sit and talk about how hard it is to find true love. She wonders if it’s better to quit when you’re ahead. He says that’s the smart play but Finn is the smart one in his family.

She tells him how heroic he is and decides she needs to jump in more and think less. Chase agrees to that and offers to do all he can to help her get her music back. She urges him to seize the moment.

As they lock eyes, he gets a text from Finn. She encourages him to go and be with his brother. He tells her tomorrow can be all about them.

Joss plays with Wiley in the park. She gets a text from Cam assuring her he will set Spencer straight. She and the kid chat and then she suggests they take a trip.

At the court house, Michael asks his mother what she has in her hands. It’s the DNA test results confirming Nina is Willow’s mother. She looks at them and sighs before claiming it’s nothing.

Drew joins them. Willow tells him it’s all over and Nina can’t stake any more claims on the family again. Michael doesn’t want to talk about Nina anymore.

Drew leads him away to talk about ELQ in the hall. He worries that his vendetta against his father could get in the way of their business merger. Michael vents about what Nina did to his family and Sonny siding with her.

Drew can understand why he is furious, but he’s had this campaign against Sonny long before this hearing. Michael admits he doesn’t know who Sonny is now and is furious with himself for seeing him as anything other than a criminal.

Drew doesn’t want ELQ used to go against Sonny. That’s not only for the sake of the company, but for Michael’s sake too. Michael is sick of them all propping Sonny up and he’s determined to out-maneuver him. He can do that without hurting ELQ.

Carly tells Willow she’s never seen her as angry as she was today. Willow rants about Nina and why she will never let her near Wiley again. She’s done with her.

Carly couldn’t agree more and shoves the DNA results in her purse. When Michael and Drew return, Joss brings Wiley in and he runs to his parents. She learns they won the case. Joss is thrilled.

After the rest of the family files out, Drew asks Carly about the DNA results. She claims Nina is not Willow’s mother. He assumes that’s for the best but wonders why Harmony says what she did.

Sonny sighs as he drifts into Charlie’s Pub. Phyllis assumes he’s looking for Nina. He’s worried about what happened at the hearing. He tried offering his support but that only made it worse.

Phyllis tells him how much simpler things were in Nixon Falls. No lawyers. He fills her in on how bad the day in court was.

She wonders if he would make a different choice if he could go back and do everything again.

He wouldn’t. He’s been true to what he believes and thinks Wiley deserves to be put first and have more love. It’s wrong to cut a loving grandmother out of his life. Sonny just wants him to grow up to be his own man.

She’s sure his heart is in the right place. Scott calls her, looking for Nina. When she gets off the line, she tells Sonny that Nina lost.

Sonny wants to go looking for her. Phyllis suggests she needs some time alone. “I need to be with her,” he insists, taking off.

Dante and Sam take Cody to Charlie’s and give him some clothes. He’s relieved he’s not really being arrested and starts asking about Britt. When the cop calls to Phyllis to order some food, he senses something is wrong.

After Dante gets the information from Phyllis, Sam starts asking them about how they know each other. They grew up together and used to get into a lot of trouble.

Sonny goes to the graveyard looking for Nina.

At Wyndemere, Ava and Spencer follow Esme’s trail of discarded clothes to the turret room and discover the door is locked. He knocks on the door but there’s no answer so he walks off.

When Ava knocks, panting Nikolas opens up with his shirt open. His wife wonders what he’s been doing. He claims he hasn’t seen Esme and looks around, adding he fell asleep while reading.

“That must have been some nap,” she says, buttoning him up. She is about to tell him about her feelings when, Esme standing on the battlements outside in her underwear, drops a shoe.

Nikolas tells his wife that the noise must have been bats. Ava apologizes for threatening to walk out on him. He flashes back to sex with Esme and then says he thought she’d given up on their relationship.

Ava almost had until she learned he asked Laura to send a letter to the private school she wants to get Avery into. That reminded her of how thoughtful he could be. They have real issue to work through but she’s never been a quitter.

The prince is still flustered and wishes he’d told her this before. He says they still have issues but can’t discuss them there.

After he leads his wife out out, Esme strolls in and says that Ava will regret this and so will he.

Cam shows up and Spencer tells him that he cut a deal to get Esme out of the house but things went wrong when he caught her tearing into Trina. Now she’s disappeared.

They bicker about the situation and Cam complains that Joss keeps going into combat mode whenever he suggests Spencer is not evil incarnate. Cam won’t lose Joss because he can’t keep his head in this.

Spencer heads back upstairs and finds Esme. There is something she has to tell him.

Downstairs, Ava is confused by Nikolas’ strange behavior. “There’s something you need to know,” he says.