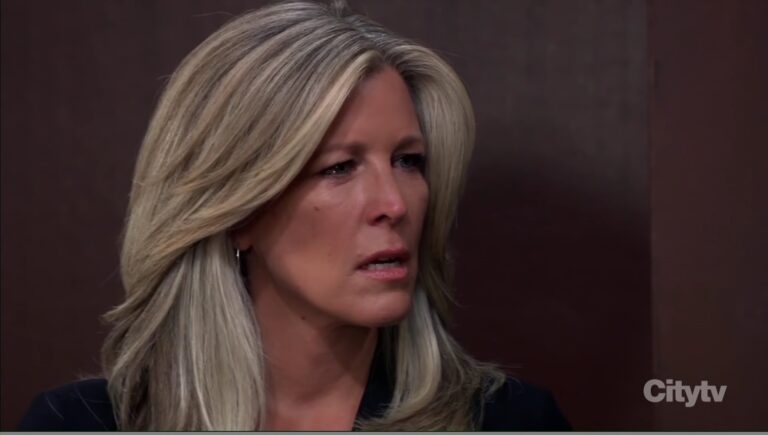 At the Quartermaine house, Brook Lynn dreams that Chase is shirtless and dripping wet and asks her, “Is it hot enough for you?” She wakes up with a start. “I’ve been single for far too long,” she says. She gets up and rants to Ned about always asking her to pick up her messes. He has messes as well. He tells her she’s right. She’s an amateur at making messes. He blames himself. He’s sorry he hasn’t set a good example.

Drew and Chase and Curtis do yoga, shirtless. Maxie checks out Curtis on his way from the room. She asks Chase how Bailey is. He tells her she’s trying to feed herself and calls it messy and hilarious. He invites her to the house. She goes inside and Lucy’s in la la land. She hasn’t noticed how dank it smells, according to Maxie. Lucy flashes to flirting with Marty and making love with him and can’t stop smiling. She tries to stay in the moment with yoga but it’s impossible. She moans aloud, thinking of the kiss they shared and Maxie questions what she said. Lucy tells her she hooked up with Martin. Maxie’s shocked. Lucy says, “It was so fun.” Maxie high fives her. “Get it, girl!” She says.

Marshall gives Epiphany flowers for singing along with him at Christmas. They both had a great time and he comments that she left early. He lets her know he’s sticking around Port Charles and thinks they’d make beautiful music together. He asks her to join his band. He thinks they’ve great musical chemistry. His band wants to give it a shot at least once. She thought he was asking her out. He apologizes but hopes she’ll consider one day singing with him. They share a laugh and he goes.

At Metro Court, Martin thinks his sister is trying to warn him away from Lucy. She denies it. She needs to go focus on being a grandmother. Later, Valentin and Martin watch Victor and Anna by the door. Martin asks Valentin who he should be worried about more. “Victor,” he says. Meanwhile, Anna shares that she has been following Victor. Port Charles is her home and she plans on being his shadow. If he steps out of line, she’ll deal with him. “The way you dealt with Peter?” Victor says.

He’s not worried since she backs off him all the time. He read her file. Her no-nonsense reputation is well -known. She tells him he’s testing her by imposing herself on Valentin. He can sees she cares for him. It gratifies him but he suspects Valentin is even more so. Back at their table, Valentin asks Martin if there’s wiggle room in Mikkos’ will. Martin will find out. He advises he should focus on Victor. Val says that it looks like Anna can as well. Val tells Martin he can’t have him as a partner and Lucy Coe. He has to choose.

At Kelly’s, Esme asks Spencer how she should pack for their trip. He has a hard time being excited over it since afterward his life will be over and he’ll have to go to prison. Laura wanders in for coffee and tells him she heard that there was a wonderful shift in him. Spencer asks how disappointed she is in him and wonders if she just hates him like his dad.

Laura is disappointed but doesn’t hate him. Esme stands up. She blames herself, too. Laura agrees, she should have had better judgment. Spencer thinks he’s learned from it but Laura doubts it since he’s thrown in with his uncle Victor. Spence defends Victor. Without him he’d be in Pentonville instead of Spring Ridge. Esme hugs Laura and tells her not to worry. Once he’s out, they’ll be a happy family.

In court, Willow is sworn in and seated in the witness stand. Scotty talks about the “modern arrangement.” He asks if they spoke with the DA after he left and if she thought about what it was about. Did she ask? Willow thought that spousal privilege applied and that she doesn’t have to admit anything. Scotty reminds her about the penalty to perjury. She tells him that his business sought business with political figures. Scotty says it shows that she and Michael gave the DA money. The DA objects. Scotty says ELQ made a donation before Nina’s arrest. What was that for. Willow has no idea.

She comments about Nina keeping Sonny from his family for 9 months. Scott asks what that had to do with the donation. The DA objects and the judge waves him off. Willow says the contribution was legal. Scott asks if the trial should be tossed out as a possible act of heroism. Does she believe Sonny saw himself as a victim at all. Willow stares at Nina and Sonny glances around, worriedly.

Nina looks sick when Judge Milford allows Scott to continue with questioning. Willow says that to her knowledge, Sonny’s not a victim. Scott asks if she thinks Sonny had some sort of unstated motivation as to not sick state on Nina Reeves? Nina whispers for Scott to stop while Willow hems and haws. Scott keeps at her. “Why did he not want restitution?”

Sonny grabs Carly’s arm and takes her to the door. “I have something to tell you,” he says. Carly drops his hand. She wants to hear. Willow finally yells, “Yes!” There’s another reason Sonny didn’t go after restitution. She admits she overheard Nina and Sonny in the chapel talking about how they were in love while they were in Nixon Falls.

Drew and Curtis have Corinthos Coffee. Drew details how being home has been. He admits he needs to be productive but hasn’t any idea of where to start. “What about Aurora Media?” Curtis asks. Drew says no. And not at ELQ, either. He’s thinking about Curtis’ Marshall problem. Curtis says has has no digital footprint. They should look for the man was pretending to be and stop looking for Marshall Ashford. He needs to be offered a job so he’ll have to give his SS number.

Back at the Q house, Brook Lynn laughs that they’re bonding over their mutual chaos. He has solutions. He tells her to ensure Chase doesn’t hold Bailey over her head the way Valentin did. Chase clears his throat from the door. Ned tells them to sit down with lawyers and iron out their roles in Bailey’s life. “It’s all about the boundaries.”