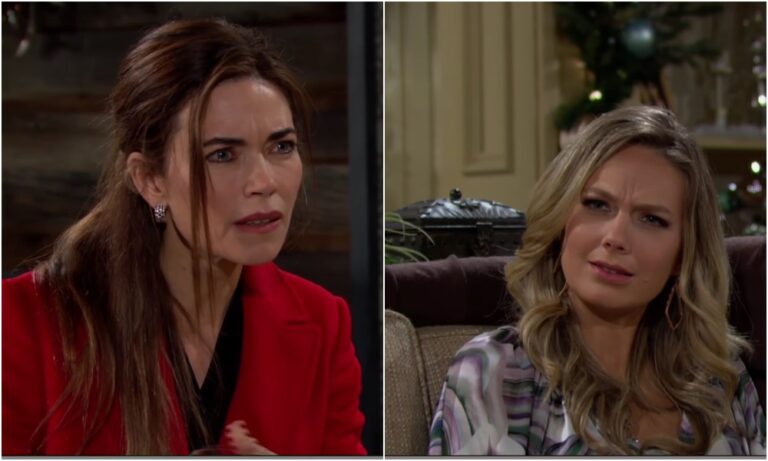 Canadian Y&R day ahead recap for Monday, December 27, 2021 episode, which airs in the USA Tuesday, December 28. (Recaps live by 5:45 PM EST daily.) In the previous episode, Sally eavesdropped on Adam’s conversation. In this episode of CBS’ The Young and the Restless, Lauren counsels Phyllis, Chance and Abby are thrown by Devon’s request, and Victoria realizes Billy’s not drinking, so he feels forced to tell her the truth about his plan.

Billy sees Victoria outside Society and asks Andy the bartender to get him another apple juice. His ex appears at his side tells him the kids are thankfully with Hannah so they don’t have to see him like this, drinking alone in the middle of the afternoon. He asks what a big deal it is. She asks if Lily knows where he is. Billy tells her it doesn’t concern her. Victoria wishes she didn’t know what it was like to be in her shoes. Andy gets another juice for Billy. Victoria doesn’t like this, or sending their kids to boarding school.

Billy says she could have stopped this whole thing. She basically gave them the green light, “Like the Red Queen. Off with his head!” She grabs his juice and tells him he doesn’t need any more of it. He tries to take it back and it spills. When she cleans it up, she smells the glass and realizes it’s juice.

She confronts him for lying and asks what he’s up to. He asks what the big deal is. It’s early for a drink even for him. She knows he ordered it because it looks like scotch. Is he trying to make her feel guilty because he lost his job? If so, it’s not working. Billy knows it’s near impossible to get a Newman to feel bad about anything. She asks if he’s punishing her. He tells her he’s had enough and takes off.

Nate says hello to Lily. She’s happy that he and Elena are moving in together. He and Devon seemed to be getting along at Christmas. Nate admits they are. He talked about how much he missed Dominic. Lily understands that he’s attached. Who can blame him? Nate admits he tried to convince Devon to get more time alone with the baby. Lily doesn’t think it’s a good idea.

She knows how sensitive this could be because of her help bringing Mac into the world. Nate guesses he should have had Devon talk to her. Lily is concerned that if he talks to Abby and Chance, they may think he’s coming at them with the thoughts that he could do a better job. Nate thinks Devon must have felt the most equipped when Abby dropped the baby off with him to go to Spain. Lily thinks they’ll figure out something everyone is comfortable with.

Abby arrives at home and walks in on Devon doing his baby whispering thing with Dominic who has finally taken the bottle. Later, the baby is put to bed and Devon calls being Dom’s godfather a great experience. They’re grateful to rely on him. Devon says he’s there to talk about amending their agreement. Chance is confused. He thought things were going well. Devon says they are. The experience has been more than he anticipated. He planned on bonding with the boy but so much has happened that none of them could have predicted.

He never imagined he’d be a part of Dominic’s delivery or be the first to hold him. It became one of the most significant moments in his life. Devon goes on to say he’s happy she left the  boy with him while she was away. It cemented their bond ad has him thinking of the arrangement. The idea of it made sense as a family friend. But it’s turned into a whole lot more for him.

He’s hoping they can agree it’s a good thing for Dominic too. He asks if they’d consider amending the agreement to better reflect how he’s feeling. Chance asks what he’d like to change. He wants to spend more time with Dominic. Alone at his place. He as thinking he could have his own room. “Correct me if I’m wrong. It sounds like you’re asking for shared custody.”

Devon wouldn’t use those words but practically speaking, “Yeah, that’s what I’m talking about.” Abby worries they’ve done something wrong but Devon says it’s not that. He knows fatherly relationships are important to kids. They don’t know what the future holds. Life’s unpredictable, he says. He doesn’t want to take the role of father from Chance. He only wants to be a supportive role. Abby thought that’s what was happening. Devon says it is, which is why he wants something in writing. Abby says, “Wow,” and gets up and walks away.

Chance tells Devon they’ll consider it. He appreciates them listening and goes. Abby’s confused. Chance blames himself. Abby doesn’t want him to do that. She knows Devon and Dom have a bond. She thinks it’s special but she’s the one who let Devon take care of Dominic when she was gone. She should have left him with one of their moms. Chance says, “He doesn’t trust me. He doesn’t think I can come through for you and Dom.” He admits he told Devon he was having a hard time adjusting to civilian life. He was restless and on edge. He should have kept his thoughts to himself. Devon’s his biological father.

Of course his mental state is of concern to him. Chance says he admitted to being overwhelmed about being a father. He calls it a dream come true for him but it’s so much harder than he thought it woudl be and then Devon’s been there since day one. “He’s doing things that maybe I can’t.” Abby didn’t know he was struggling that much. She thinks it’s natural. Chance says maybe so but now, Devon doesn’t know if he can count on him. Abby thinks that they need to take Devon at his word. She thinks that it’s similar to the way Mariah felt in the beginning. Devon has a different approach. She thinks they need to be patient. They’ll figure it out. Abby’s worried he didn’t come to her with all of this. It must be frustrating that his connection with Dom didn’t click right away. It’ll grow over time, she tells him. Chance seems relieved and calls Abby amazing. “I’m in love,” she says. She’s tough. He can tell her anything. They hug.

Y&R spoilers up to December 31

Phyllis greets Nick at Grand Phoenix. She tells him she enjoyed their video chat with Summer and the gang. Harrison liked Phyllis’ gift the best. Phyllis says it’s not a contest. “But if it were, I’d win.” She laughs. He’s wearing the gifts she got him. She knows. She smelled his essence. Nick lets her know he’s off to see Summer. She hopes he has fun and wishes she thought of going. He’s trying to be more spontaneous, he says. Phyllis thinks that a New Year’s birthday forces one to think about his future. “Not that you’re doing that,” she says.

She could think of worse places to do that. She offers to help if he needs anything done here while he is gone. He appreciates that but he’s not her problem anymore. They tell each other to have a happy New Year and he goes. Lauren wanders up. Phyllis admits she’s jealous that Nick’s going to visit Summer.

Lauren thinks she should go but Phyllis says she’d look like a stalker. She can’t go anywhere because of work. Jack went to New York, Lauren tells her. Phyllis is surprised. she wonders if he left town to get away from her. She admits she didn’t go to his Christmas celebration. Lauren assumes he feels rejected but Phyllis doesn’t want to ruin their friendship. She wonders what to do. Lauren suggests she make it up to him New Year’s Eve. She just texted and he said he was in New York for a few weeks. Phyllis says it’s fine. It’s for the best. Her and Jack for the holiday is a bad mix.

Lily disconnects a call from the kids when Billy gets home. She tells him the kids are having fun in Hawaii. Billy lets her know what happened with Victoria. She knows he was drinking apple juice and will either figure out what he’s doing or talk to Jack or someone else. Lily knows if she tells Nikki that she’ll tell Victor. Billy hopes he didn’t push it too far.

It could all be for nothing now. Lily doesn’t like watching him pretend to fall apart but she knows it’s important for him to redeem himself. She’s not sure what they can do. He thinks he may have to bring Victoria on board with the plan.

Nick helps Sharon bring bags into Crimson Lights. He has a favour to ask her. He asks her to care for Christian while he goes to see Summer. She’d be delighted. She tries to psychoanalyze him having heard he had a dream from Mariah. Nick doesn’t want to talk about that. Nate appears and she goes to get coffee for him. Later, Devon arrives and tells Nate about his discussion with Abby and Chance about Dominic. Nate’s glad Chance seemed to understand where he was coming from. He thinks it sounds like a good sign.

Victoria takes a call and rolls her eyes. “Fine. Send them in.” Billy and Lily arrive. She questions what’s going on. Lily apologizes that they’ve lied to her. Billy wants to explain. He thinks once he does, she may come to his side. She’s doubtful. Billy details his plan. “Only you would come up with a plan this stupid,” she says. “Get another job,” she suggests. He doesn’t want Adam and Victor to get away with what they did. Lily understands Victoria’s concerns but says there’s a poetic justice to it. Adam always comes out on top.

At home, Lily watches Billy pace and worry about Victoria’s decision. Victoria finally arrives. She thinks the plan is outrageous but she won’t get in his way for a price.