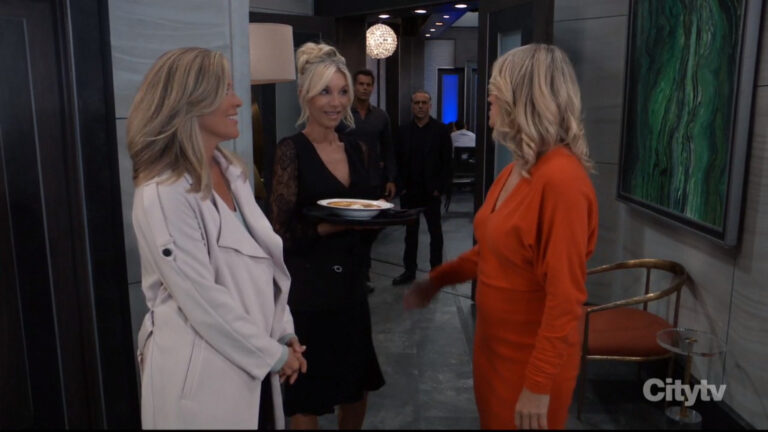 It may not have been thrilling, but it was welcome.

She clearly enjoyed having him undressed and trapped in her bed for days more than she has any other turn of events in years.

It was like in the early Harlequins where a nurse would gradually fall for one of the many mostly nude and incapacitated men in her care.

Once Dex was mobile enough to cease being an unused sex toy, he zipped up and returned to working for Sonny, leaving Joss in store for another non-lecture from her mother that was more or less about her becoming just like her.

I feel bad for Cam of course, but this was inevitable.

Since Joss ceased being one of the children of the corn to become a Carly clone, any man who gets involved with her is destined to be doomed.

Oscar probably got off lightly.

Another thing I will say for Joss and Dex is at least they are not Carly and Drew.

They have both moved long beyond their raucous and dangerous days into the endless stream of pep talks and affirmations that constitutes their very longwinded but far from breathless relationship.

Sonny getting to the brink of being annoyed about her looping Brick into her latest shenanigans is about as close to exciting as this has become, but it was about as hot as the steamless soup that Carly nearly poured on Nina during their latest fight before backing away from any drama.

It’s all about avoiding drama lately, which is at least new for Carly.

Although she and Drew will wind up kicking themselves, and maybe experiencing some friction, when the truth about Willow’s biological mom eventually comes out, I’m not sure that will be pay-off enough.

Carly and Nina insulting each other is fun but it has its limits.

This Cassadine plot so far hasn’t had the level of delirious absurdity that they had in the old days.

As much as I adore Victor, he’s more of an elegant and vicious pervert than a completely deranged megalomaniac like Stavros and the others.

However, I am still hopeful that this could go in a unique direction instead of another re-tread of their doomed schemes for world domination.

I may usually root for the villains, but I would still find it very hard to root for Laura and her lot.

They may not have the James Bond-tier villainy of the Cassadines, but they don’t have any of the charm that goes along with being its foil.

With the exception of Robert and Holly, they are a group of deeply corrupt and sanctimonious people without much style or sense of humour.

Meanwhile, Anna and Valentin have the whole gothic romance meets spy movie thing from their past that scarcely gets brought up (it’s been a lot of time since we got flashbacks to him as the WSB’s answer to the Hunchback of Notre Dame), all of which has vanished like the bullet scars that characters who have been shot dozens of times should show.

With the Cassadines and Feds on Devane’s trail since she took off, it was a nice surprise to hear Olivia Jerome’s name mentioned and it would be a pleasure to see her tear Anna down again, especially after the rather disappointing last battle they had with that wet designer sock Dr. Monroe in the middle.

We’ve known Kelly Thiebaud has been slated to exit for months and that her most likely avenue for departure was the most tedious one, disease.

I’m still hoping that this isn’t another one of those stories and could take an unexpected left turn that could have her gone in a more memorable way.

Given the specter of the cursed diamonds, this is still a possibility.

As for Britt, it’s easy to feel bad for her, but seeing as she’s been written as the shadow of the character she once was ever since they brought her back, it feels more like a metaphor for what they did to one of the show’s better villainesses from recent years.

Obrecht has also paled in comparison to what she used to be and lightened her hair to show it.

The hook story has lost some of its momentum.

I tend to forget about it when it isn’t onscreen.

No one ever seems all that threatened.

Maybe it’s because the show always feels like it sprawls more than the others, but tension is something it has a really difficult time sustaining.

Heather’s brief, and very welcome appearance, at least cast a little doubt on who the hook might be.

Even Finn was wondering if she was involved given that she had traces on her of the obscure poison being used.

There isn’t a lot of other reason to bring Heather back otherwise, although some have suggested that more than being back to her casual killing, she could also be involved with whatever it is that Austin is up to his neck in (it’s probably either her or Olivia Jerome.

I hope they aren’t planning to add yet another character they don’t know what to do with).

I know a lot of people have been miffed by the re-writing of Liz and Finn’s pasts, the destruction of her parents’ characters, and, even more so, by how little sense any of it makes.

After all, for the timeline to be minimally plausible, Finn has to be in his sixties, and not only is Liz a different generation, but he had sex with her sister and his wife was her father’s mistress.

While all of that could be potentially hilarious, I have the sneaking suspicion it will be brushed into the ether.

It does make me wonder to what degree they will bother re-writing Dante’s past now that it has been hinted that he and Cody were involved with something at least questionable if not outright sinister when they were teenagers.

Will this be used as another way to try and give Cody dimension, be a bitter secret the airing of which will tip Dante back into another psychotic break, or will it be something more unexpected?

Unlike many viewers, I don’t object strongly to ridiculous re-writing as long as it goes somewhere.

BLQ’s deal with the devil

After months of beating around the bush, Linc finally offered Brook Lynn the chance to get her songbook back in exchange for her covering for his past (and potentially future) sexual harassment.

Brook Lynn will likely double-cross Linc in the end, but this will somehow only cause more issues with Chase.

I know many viewers like Brook Lynn and Chase, but I’ve always found their sluggish Hallmark movie-style romance tedious.

Combined with this ripped-from-the-headlines-of-years-ago plot that plays more like a 50s sex scare movie about vice in the entertainment industry without the unintentional laughs and the fact, as people tend to point out, that Chase and BLQ have a pretty one-sided relationship where she exploits him, makes the whole thing kind of gross.

Leave us a comment about GH, whether you agree or disagree, remember this is only an opinion and everyone’s is welcome here.