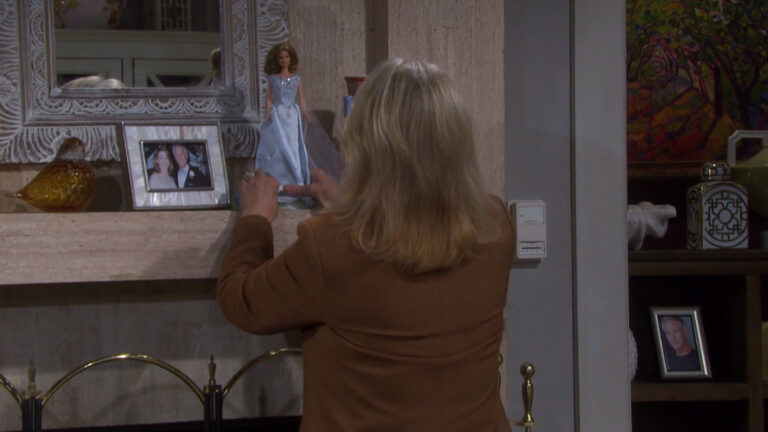 In today’s Days episode, it’s still Thanksgiving and Alex and Stephanie have a date, Rafe has Gabi and Li over, and Nicole dines with Abe and Paulina as Marlena and EJ talk about how special Susan was.

In the last Days recap, on Thanksgiving in Salem, Jada decided to keep her baby and raise it with Eric, Nicole and Rafe said goodbye, and Abe and Allie brought Thanksgiving to SPD.

Stephanie finds Alex lighting candles for a romantic dinner at the Kiriakis manse.

He thinks she’s been working too hard. This is their second date. She smiles.

They talk about how awful they feel for Tripp and she says Chanel’s hanging in there.

He talks about how Thanksgiving dinner with Bonnie wasn’t easy since she went on and on about how she could have been killed.

They discuss the clown and hope he’s caught.

He’s shocked she knows about it but she’s eaten them every year.

They dig in and they love them. “I have a very sophisticated tongue. Palate. I mean palate,” he says after thinking it needed more sage.

He eats more muffins and calls to God. He thinks they’re orgasmic.

They make loud kissing noises as they make out.

She calls their dinner perfect.

Rafe dries dishes at home, then gets ready to puts Nicole’s pie into the oven, flashing back to her instructions on how to cook.

He throws it in the garbage. In the living room, Rafe brings Gabi and Li the crackers and cheese.

Rafe gets beer from the cabinet under the TV and Li thanks him for inviting him.

Gabi says Ari’s at Sonny’s. Rafe made her favorite cornbread.

Gabi’s sorry. She and Holly wanted to watch a cheesy Christmas show.

Rafe’s sad. He brings up Nicole and Gabi calls her ridiculously fickle.

Rafe tells them that Nicole made them a pie. Li’s thrilled.

He loves pie. Rafe tells them about Jada’s pregnancy and Gabi laughs at Nicole getting her just desserts.

Gabi wants to send Jada and Eric a baby gift. Rafe says no.

You’re supposed to wait until the shower.

They agree to focus on happy things like the wedding.

They toast to love and laughter. Rafe thinks about Nicole after seeing a photo of them together.

He puts it away.

Nicole arrives at the pub and remembers hearing Eric say that he and Jada will raise their child together.

She takes off while inside, and Eric cleans the table.

Eric thinks Jada needs to sit down and not help since she’s pregnant.

Jada snorts at that and reminds him she’s a bad-ass detective who takes down bad guys. She digs into the pie.

He appreciated that she stayed for dinner.

She admits it was awkward but nice.

Eric’s old-fashion thinking has him saying that a benefit to being pregnant somehow means that she has a “free license to eat what she wants.”

She says pregnant or not, she does that now.

Jada’s worried about what Nicole will feel about them keeping the baby.

Jada thinks this will be hard.

Eric will ensure it’s clear that it won’t affect their relationship. She’ll be supportive. “If you say so,” Jada says.

Nicole’s insecure and territorial. She won’t take this news in stride. Eric will talk to her but he truly believes they won’t have a problem.

He asks her to stay living there until after she’s had the baby.

She doesn’t get why but he wants to be involved in her pregnancy, and take her to her appointments.

What if she has a late-night craving?

She asks, “What about Nicole?” He thinks they need to put their best foot forward for the baby’s sake.

At home, EJ listens to Rafe’s message asking for a statement about Ava Vitali.

EJ stops the recording and downs some whiskey. Marlena walks in.

She tells him Harold let her in and she wanted to offer him and Johnny her condolences.

EJ says Johnny doesn’t know yet and he’s not sure how to tell him.

EJ blames himself. EJ tells her the whole story about the kidnapping.

Marlena asks him not to blame himself. He also blames himself for Abigail’s death. “No, oh no!” Marlena says.

EJ says it easily could have been Belle. She knows but EJ is not responsible.

EJ calls himself prideful and selfish and now, Chad’s a widow. Tony begged him to pay the ransom but again, EJ says he thought he knew best.

He beats himself up for a while and Marlena listens.

He calls himself an egotistical, ruthless son-of-a-bitch. Marlena denies it. He was never a disappointment to his mother.

He was the love of her life. She was proud of him, calling him a good son and father.

EJ barks out a laugh at that. She was biased. Marlena says that she loved him.

She tears up. EJ cries as she calls him beloved to her. EJ calls Susan fearless.

“You never want to estimate a mother’s love for her child,” Marlena says.

EJ talks about her friendship with Marlena, who says she was warm and compassionate.

Marlena says she made a doll that looked exactly like her when she got married.

She even made a miniature dress of the gown she wore when she and John married in 1999.

It was the most touching gift Marlena had ever been given. “I wish I had told her.”

EJ regrets not telling her things too.

He thinks if there was any good in him, it was because of his mother.

She was the best in him.

Abe and Paulina find Nicole in the square. She hears the bail didn’t come through in time but they had Thanksgiving dinner with her at SPD.

Nicole’s glad. She tells them she made a pie for Rafe. Abe remembers her mother’s pie well.

Though he says Paulina’s is even better, when she gives him the evil eye.

They agree to eat dinner together. They find a seat nearby and Nicole picks at her food.

She tells Abe and Paulina that Eric and Jada learned she’s pregnant and she just heard that they’re raising the baby together.

Nicole assumes that Eric is going to dump her. Paulina’s sorry.

Abe tells her to talk to Eric about it. Maybe she misunderstood. Nicole says no, it’s crystal clear.

Abe won’t interfere so Paulina says she will.

They stop her and say goodbye.

They joke that she was a bit of a downer but she’s entitled.

They tell her to call if she needs them. Paulina encourages her to fight for her man.

Once at home, Marlena takes out the Marlena doll and puts it on the mantle beside her wedding photo.

EJ goes to the spot where Ava and Susan’s car ran off the road.

He sets some flowers down and cries.